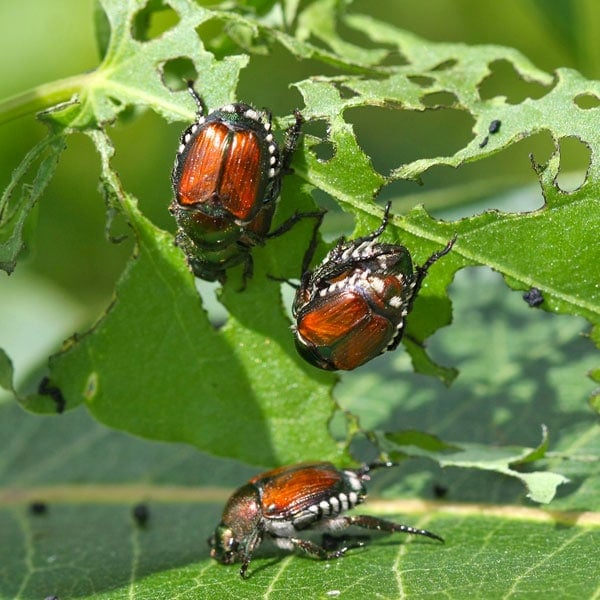 Learn how to identify and get rid of Japanese beetles on lawns and landscaped areas using these proven, natural and organic methods.

An incredibly destructive pest of ornamental plants and turf grasses, Japanese beetles (Popillia japonica) were first discovered on nursery stock in New Jersey almost a century ago. Originally introduced from Japan, they have now spread to most states east of the Mississippi River. Isolated pockets have also been found in Wisconsin, Colorado, Oregon and California. Currently, the estimated damage and cost of controlling Japanese beetles in the U.S. exceeds $460 million per year.

Note: In its native Japan, where there is little turf grass available for grub feeding and a large number of natural enemies, this insect is not a serious plant pest.

Adult Japanese beetles (1/2 inch long) are metallic blue-green with coppery wing covers. Most active on warm, sunny days they eat flowers — roses are a favorite — and strip the leaves of over 300 different plant species, leaving behind only veins and stems. Larvae are plump, white grubs (3/4 inch long) that spend up to ten months of the year underground. Grubs feed on the roots of a large number of plants, but are especially injurious to lawns, which show irregularly shaped patches of wilted, dead or dying grass.

Japanese beetles overwinter in the larval (grub) stage. In early spring larvae move up near the soil surface to feed on plant roots. By late May pupation begins and adult beetles emerge towards the end of June, remaining active until September. Eggs are laid in soil amid the roots of grasses and hatching takes place within two weeks. These young larvae feed on roots until cold weather arrives, then burrow deeper in the ground to wait out winter. One generation per year, the life-cycle requiring two years to complete.

Note: The USDA maintains quarantines to restrict the movement of this destructive pest, but they are expected only to delay the spread rather than prevent it. 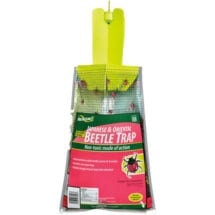 Releases floral and sex attractants to capture both male and female beetles.