Home » Pest Problem Solver » Landscape/ Lawn Pests » Yellow Jacket: How to Identify and Get Rid Of These Pests 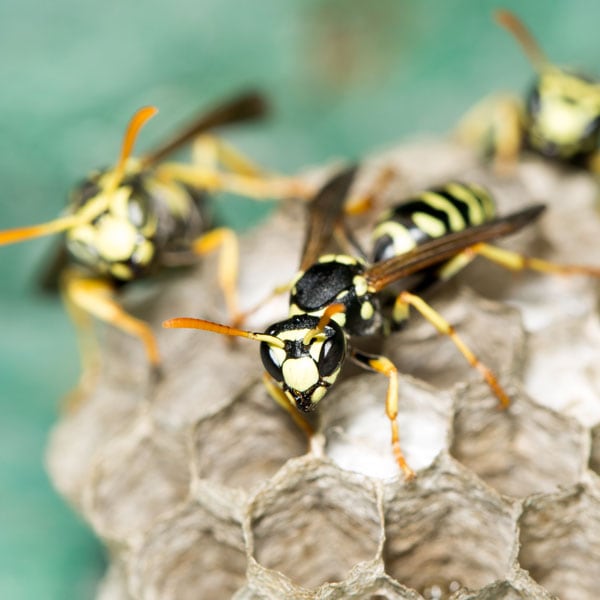 Yellow Jacket: How to Identify and Get Rid Of These Pests 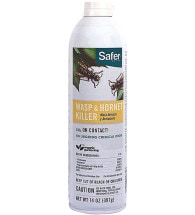 Contains a blanketing foam that works in seconds without risking your health!

Yellow Jacket is one of the most dangerous insects known to man, and unfortunately, they love to drop in during outdoor barbecues and picnics.

Yellow jackets (Vespula spp.) are more aggressive than other stinging insects, such as wasps, hornets, or bees, and will vigorously defend their nests.

Swarm attacks can occur when a nest opening is accidentally stepped on or hit with equipment. Ground vibrations from lawnmowers have also been known to trigger an attack, especially in late summer.

Considered beneficial around home gardens, yellow jackets prey on insects such as caterpillars, spiders, flies, and even mollusks.

Unfortunately, by late summer, when their populations peak, they can be a problem pest around picnic tables, trash cans, and hummingbird feeders.

How to Identify Yellow Jackets?

The Yellow Jacket is a predatory insect native to North America that builds a large nest to house the colony.

These black social wasps have yellow markings on the front of the head and a yellow band around the abdomen.

The face is mostly yellow, and the eyes are dark. When they’re at rest, their front wings fold lengthwise. The large antennae are quite noticeable.

These wasps are sometimes mistaken for bees due to their size, shape, and coloration. However, there are some characteristics that distinguish the two.

All yellowjacket species have black and yellow markings, and variations in patterns can help identify the species.

They are about the size of honey bees, measuring about 1/2 inch in length, but they are hairless and do not carry pollen. 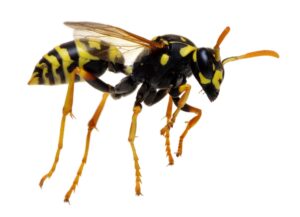 Life Cycle of a Yellow Jacket

The yellow jacket queen is the only member of a colony that will survive the winter. In spring, she digs a cavity in soil or enlarges an existing hole, constructs a nest, and lays a dozen or so eggs.

After 3-5 days young larvae hatch and are fed by the queen until they mature into workers and can forage for themselves.

Eventually, the queen restricts her activity to producing eggs while the workers feed her and care for the larvae and pupae.

The founding queen remains inside the nest until her death in the fall, laying eggs and expanding her brood of up to 10,000 workers and 15,000 nesting cells.

During the summer, the nest grows until there are several layers of comb enclosed in a paper envelope. In late summer, newly developed males and queens leave the nest and begin mating.

Males die shortly after mating, while females seek out suitable sites in which to overwinter.

Adult yellow jackets eat carbohydrates and sugars like fruits, flower nectar, and tree sap. Proteins like those found in insects, meat, and fish are good for larvae.

In the late summer, however, foraging workers look for meats, ripe fruits, human garbage, sodas, and picnics in order to raise a new generation of queens and this is when they frequently come into contact with humans.

Where Do Yellow Jackets Live?

There are many kinds of yellow jackets, and many of them build nests both above and below ground. They will sometimes use abandoned rodent burrows for nests, expanding the cavity as the colony grows.

Look for small stones and dirt piling up around the opening of a burrow for signs of an underground yellow jacket nest. Plus, they will use items already lying on the ground that have openings, like railroad ties or concrete blocks.

Above ground, they prefer to build nests in hollow logs, tree stumps, attics, between walls, under eaves, and inside recycling bins where sugars are common.

The majority of yellowjacket workers forage for food within 1,000 feet of their nest, which is roughly three football fields.

They are drawn to protein sources such as hamburgers on the barbecue grill during the middle of the season, which can be a nuisance during outdoor activities.

During the late summer and early fall, they tend to eat more sweets, such as soda and juice.

Are Yellow Jackets Dangerous to Humans?

The yellowjacket is one of the most dangerous insects known to man.  These vibrantly colored wasps have a fiery sting and bite that might seem too strong for how small they are.

For people who are allergic, just one sting from a yellow jacket can kill them. Even if you don’t have an allergic reaction, the sting is excruciating.

Unfortunately, they frequently come into contact with people because they scavenge for meat and sweet liquids.

In comparison to other stinging insects such as wasps, hornets, mud daubers, and bees, yellowjackets are more aggressive.

Not only do they sting, but they can bite as well. In fact, they frequently bite to gain a better grip with which to jab their stinger. Because they don’t lose their stinger, they can sting repeatedly and will do so unprovoked.

Yellow Jackets are fiercely protective of their nests. Swarm attacks can happen when someone walks into or hits a nest opening by accident.

How to Treat Yellow Jacket Stings

Most people will experience immediate pain when stung. Symptoms will include localized reddening, swelling, and itching.

Unlike bees, yellow jackets will not leave a barbed stinger in the skin and can sting multiple times.

How to Get Rid of Yellow Jacket

There are four main methods of getting rid of yellow jackets. To be able to use them, you’ll need to first locate the nest and find the entry and exit points.

They are most active during daytime hours and so you can monitor their activity at the time to locate the nest. Once you have, here are the four methods you can use to get rid of them effectively:

Dusting involves the use of insecticidal dust to eliminate yellow jackets. The dust is applied directly to the nest and nest openings and works for weeks to kill yellow jackets and their larvae.

Drenching involves saturating the nest and its entrances with a liquid insecticide. This method instantly kills wasps and continues to work for weeks after application.

Spray Safer® Wasp & Hornet Killer directly into the nest opening. Do this at dusk or early morning when stinging insects are least active.

To attract wasps, traditional baits use chemical bait. Wasps die when they consume the bait or bring it back to their nests for the queen to have.

Traditional traps use a sweet-smelling or protein bait source to attract yellow jackets. They are then unable to escape the trap and die inside. You can buy these traps at most home and garden stores. They are simple to set up and use.

If you can’t find the nest, hang reusable or disposable traps around backyards and patios, trash cans, and campsites to reduce pest numbers.

How to Keep Yellow Jackets Out of Your Yard

Prevention is the most effective treatment method when it comes to yellowjackets.

With that in mind, follow these tips to keep yellowjackets out of your yard in the first place:

Yellowjackets need sources of protein to survive. Cover trash cans/bins and keep them clean so insects are not attracted and don’t find a food source in your yard.

If recycling, rinse materials before putting them in the bin. Store refuse containers well away from outdoor eating areas to reduce the number of encounters. Keep pet food indoors

Clean Up After Barbecues

If you’ve had an outdoor barbeque or picnic, clean up quickly and thoroughly. Leaving food scraps lying around will attract yellow jackets.

Get Rid of Other Pests

Yellow jackets will be drawn to any yard that has a lot of food. If there are many flies, caterpillars, spiders, or other insects on your property, there will also be wasps.

Because of this, the only way to get rid of these pests is to treat and stop the problems that cause them to be around in the first place.

To keep wasps away, hang false nests, get rid of rotting wood and trash piles in the yard, and use other preventive measures.

Wasps are less likely to build nests in your yard if they don’t find it appealing.

Designed to mimic an enemy nest, The Original Waspinator works by sending the message that the area is already inhabited. Stinging insects stay away!

Seal cracks, crevices, vents, screens, and other entry points to prevent access into homes or sheds. 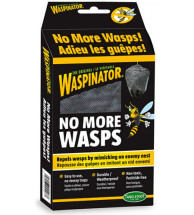 This decoy nest tells wasps they're in enemy territory, and they fly elsewhere. 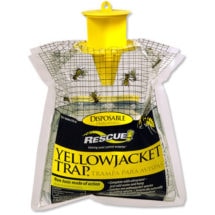 A powerful attractant is included; you simply add water and hang it outside. 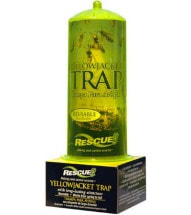 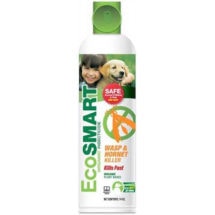 Protect the health of your family and eliminate the hazards of toxic residue.