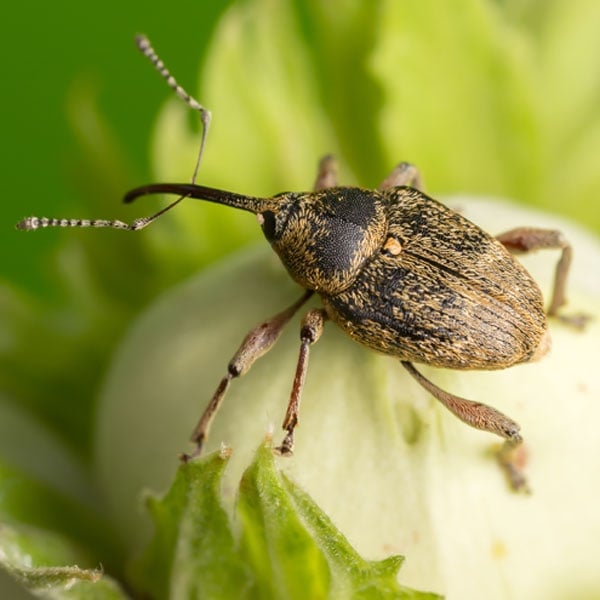 A serious late season pest of pecan and hickory trees, the pecan weevil (Curculio caryae) chews holes through the shuck and shell of nuts and are responsible for two kinds of damage.

The first type of damage is caused by adult weevils feeding on kernels prior to the shells hardening. Nuts punctured by weevils during this stage have a tobacco-juice-like stain around the feeding site. Damaged nuts often shrivel, turn black inside and drop prematurely.

The second type of damage occurs later in the growing season when females place eggs within the newly formed kernels. Larvae hatch and feed within the kernel causing further damage. These infested nuts do not drop and are often harvested along with a healthy crop. The pecan weevil causes serious economic loses wherever pecan and hickory trees are grown.

Adults are hard shelled beetles about 3/8 inch long with long slender snouts (females have a snout longer than their bodies) and thin legs. They are reddish brown in color and densely covered with olive-brown hairs and scales. Larvae are fat, creamy white, C-shaped grubs. They have reddish-brown heads and grow to 1/3 inch long.

Adult weevils and larvae overwinter in the soil. The majority of adults emerge from the soil during August and the first week of September. When nuts reach the dough stage of development, mated females lay 2-4 eggs in separate pockets within the kernels. After eggs hatch, young legless larvae feed for about 30-35 days inside pecans. Between late September and December larvae exit nuts through a small circular hole, drop to the ground and burrow into the soil to a depth of 4-12 inches. They spend one to two years in the soil before pupating in the fall. (Most of the grubs will pupate the following fall. Although some do not pupate until the fall of the next year.) The pupal stage lasts about three weeks. Adults remain in the soil until the following summer. There is one generation every 2-3 years.

Note: Botanical insecticides — derived from plants which have insecticidal properties — have fewer harmful side effects and break down more quickly in the environment than synthetic chemicals.