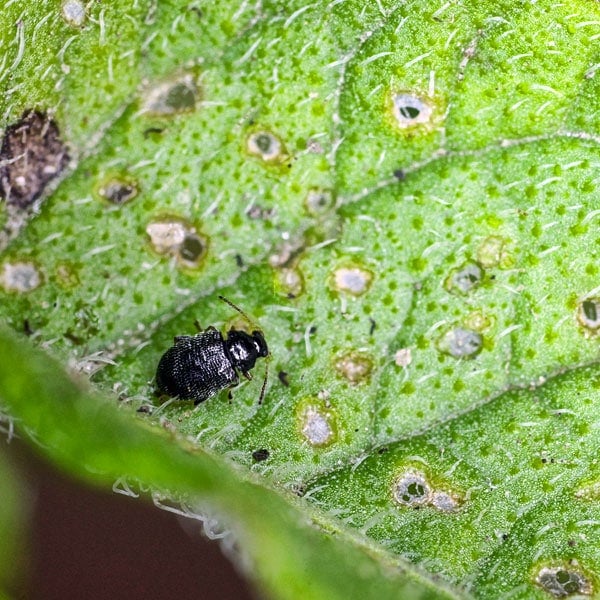 Many species of flea beetles are found throughout the United States. They are small jumping insects (similar in appearance to fleas) commonly found in home gardens early in the growing season. A voracious pest, they will damage plants by chewing numerous small holes in the leaves, which make them look as if they have been peppered by fine buckshot. When populations are high, flea beetles can quickly defoliate and kill entire plants. They feed most on hot sunny days and attack a wide variety of plants including beans, cabbage, corn, eggplant, potatoes, peppers, tomatoes, lettuce and most seedlings.

Adults are small (1/10 inch long), shiny, dark brown or black beetles with large hind legs that allow them to jump when disturbed. Some species may have white or yellow stripes on their wing cases. Larvae are small, cream-colored worms (1/8 – 1/3 inch long). They live underground and feed on the roots and tubers of young plants as well as on germinating seeds.

Adults overwinter in the soil or garden debris and become active in the spring, feeding on host plants as new growth appears. Tiny white eggs are laid on or in soil cracks around the base of plants. These hatch in about one week, and the slender white larvae feed on plant roots for approximately 2-3 weeks. Pupae usually remain in the soil for 7-9 days until adults emerge and the cycle is completed. There are one to four generations per year, depending on species and climate.

Tip: Trap crops, such as mustard and radish, can be planted near garden areas to draw pests away. 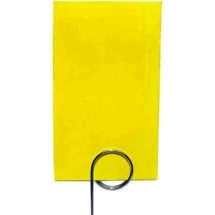