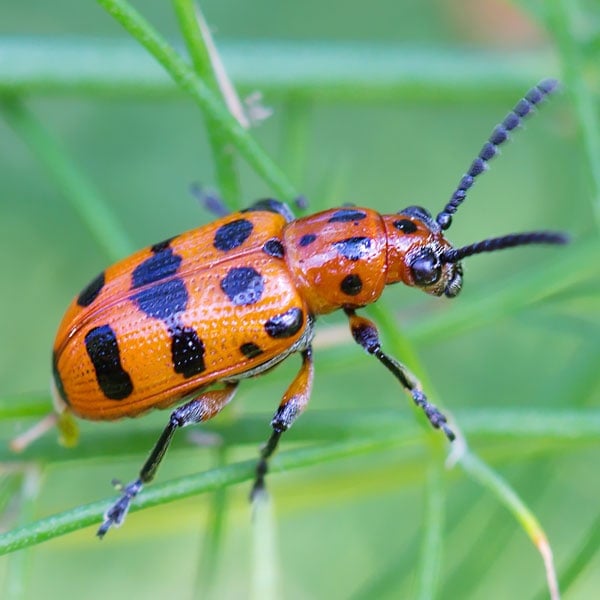 Learn how to identify and get rid of asparagus beetles organically — without resorting to toxic sprays or chemical powders!

There are two types of asparagus beetle. Both target their namesake plant and do harm to newly emerged spears as well as late season foliage.

The common asparagus beetle (Crioceris asparagi) attacks both garden variety and wild plants. Originally a European species, it has spread throughout the United States. Adult beetles (1/4 inch long) are metallic blue to black with creamy yellow spots and reddish margins on their wing covers.

The adult spotted asparagus beetle, looking somewhat like a lady beetle, is red-orange with 12 black spots. Their damage can be problematic, but they are not as destructive as the common asparagus beetle.

The plump larvae (1/3 inch long) of both asparagus kinds of beetles are slug-like in appearance. The common beetle has a black head and visible legs and are gray or greenish in color. The spotted beetle larvae is orange.

Detailed descriptions of both types as well as definitive photos of beetles, larvae, and eggs — and a fascinating picture of a parasitic wasp violating an asparagus beetle egg — see the University of Minnesota Extension page here.

Adults of both types overwinter in plant debris and garden trash. The common asparagus beetle emerges early, at the same time as the asparagus spear. Within a week of its appearance, the common beetles begin laying brown eggs in rows of three to eight on the new spears.

The larvae emerge within a week and begin to move upward as the plant grows, feeding as they go. After a couple weeks of intense feeding, they fall to the ground where they pupate for a week. Then the adult beetles crawl from the soil and the cycle begins again. Two life cycles are common in most regions but as many as five can be produced in areas with longer growing seasons.

The spotted asparagus beetle appears somewhat later, allowing the growth of fronds on which they deposit a single green egg. Larvae prefer to feed on the berries of mature asparagus plants. Within two weeks, they drop to the ground, entering the soil where pupation takes place. Ten days later the new adults emerge. Their reproductive season ends most places by late July.

Both adult and larval stages of common asparagus beetles feed on spears during the spring and early summer months. Their presence is often announced when spears take on “shepherd’s crook syndrome,” the twisting of the asparagus head giving the spear an uncharacteristic hook.

The beetle’s feeding can cause visible scarring and staining as they chew and deposit frass, the excrement left of their feeding. Often, spear tips will turn brown. In summer, asparagus beetles move to feed on the ferns. Significant defoliation at this point can weaken the plants, making them more susceptible to Fusarium wilt and other pathogens. Beetle damage may also limit the amount of nutrients plants can take in for the next growing season, causing fewer and less vigorous spears.

Some asparagus growers report a small but ongoing presence of asparagus beetles in their patches, a presence that doesn’t result in much damage or larger infestations. Finding the odd spotted asparagus beetle — their bright coloring makes them easy to see — may not portend disaster. But finding a few common beetles, either in larvae or adult stage, probably means there are a lot more on the way. Distinguishing the two types of beetles will help protect your crop. The sight of even one common asparagus beetle should alert you to take action. 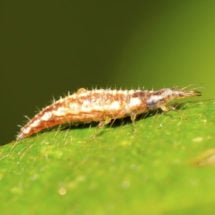 Also known as the aphid lion, this general predator feeds on most soft-bodied pests.