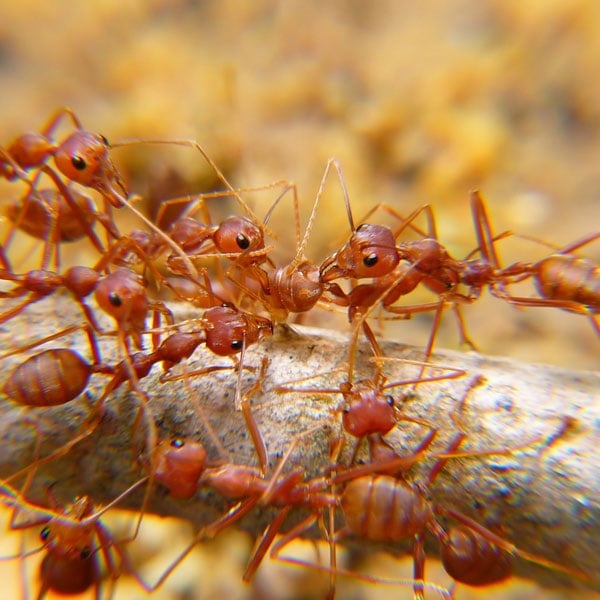 How to Get Rid of Ants (Methods That Actually Work)

Have an ant problem? Here’s how to get rid of ants permanently — both inside and outside — using proven, organic and natural control strategies.

Have an ant problem? Then you’re in the right place. This complete guide will teach you how to get rid of ants permanently, using proven control strategies.

As a group, ants are important natural predators of many insect pests including flea and fly larvae, caterpillars, and termites.

However, there are times when it may be necessary to get rid of an ant problem, especially when they are found in the kitchen searching for food.

In fact, ants lay down a chemical pheromone trail to and from a food source so other ants can easily find the food source.

Some species invade lawns and gardens where they build large unsightly mounds or protect aphids, mealybugs, scales, and other insects from their natural enemies.

They can also damage plants by tunneling around the roots causing them to dry out.

In this article, you’ll learn how to get rid of ants usually both natural and conventional methods, as well as learn tips to prevent them from entering your home in the first place.

How to Identify Ants?

They have three body parts (head, thorax, and abdomen) and can be anywhere from a yellowish-red in color to black.

Most are wingless, but winged forms exist during “swarming” or colony reproduction. Ants have pincer-like jaws and can bite although most do not. A few species are very aggressive and will inflict a painful sting.

Tip: Look closely to determine if what you see is an ant or a termite. Ants have narrow waists and bent antennae. Termites have thick waists and straight antennae.

Three Things That Attract Ants to Your Home

The fact that ants can eat almost anything and live almost everywhere lends to why they’re such a common pest.

If you want to get rid of ants, you need to figure out what’s bringing them into your home in the first place.

Here are the top three things that make your home more attractive to ants:

Ants will eat just about anything you leave out. Even though they will eat any scraps or crumbs of food, they are especially interested in sweets.

So if you happen to leave some cookie crumbs on the kitchen counter, or some sticky jam on a butter knife, over time expect some unwelcome guests in the form of some ants.

Even if only one ant finds the source of the sweet smell, it will leave a scent trail that will lead the rest of the colony to the spot. And this can lead to a big ant infestation.

Another thing ants need is some water to survive and thrive. And they don’t need water just for drinking, they also bring it back to the colony as well, where it is stored for later use.

When they find a good water source, they leave a scent trail to let the rest of the colony know.

While ants are small enough to find shelter almost anyplace, they prefer to create a colony inside a warm place.

And so, if they notice any entry points such as cracks or crevices, they’ll definitely find their way in.

Common Ant Varieties to Watch Out For

With 12,000 ant species in the world, it’s hard to know all of them. The main species of ants are:

Carpenter ants get their name for their love for wood. If you notice a path of sawdust around floorboards, wooden beams, or window sills, it could mean you have an ant infestation and you should contact a professional exterminator immediately.

If left untreated, these insects can create devastating damage to your home’s structure.

Generally, carpenter ants will form their primary colony outside and construct satellite colonies inside a home.

These ants also like damp areas so keep an eye out for leaky showers, wetness around windows, and damp areas in the basement. Carpenter ants will only tunnel through wood that’s already damaged by water. 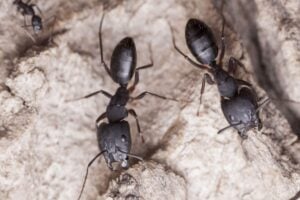 Fire Ants can leave a mean sting and are usually found around yards, parks, and playgrounds. These common pests prefer warm weather and can be attracted to trash and debris left around the house.

Although not poisonous, you’ll want to keep an eye out for their mounds. These mounds can grow fire ant mounds as wide as 24 inches and are jam-packed with thousands of ants.

Be aware stings can result in allergic reactions that may become more serious in some. 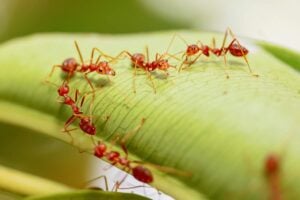 Pharaoh Ants range in color from tan to brown. These ants are known to split their colonies if they are sprayed, leading the infestation to spread around the perimeter of your house.

This is a common house ant known to infiltrate if you leave out scraps, sweets, pet food, liquids, or crumbs.

These ants could carry streptococcus, staphylococcus, or salmonella so make sure your eating areas and trash cans are wiped down to avoid welcoming these insects in. 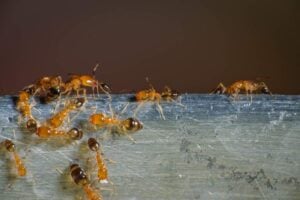 The odorous house ant is known for giving off a rotten coconut smell when it’s crushed. Like pharaoh ants, these ants are attracted to sweets and water.

You’ll likely see hundreds of these ants appear out of nowhere should you forget to put up food or have crumbs left around the house.

This species could spread harmful bacteria so you want to make sure you don’t leave out a food source that could attract them.

Pavement Ants (Tetramorium caespitum) have two obvious nodes and fine striations along the head and thorax.

Most commonly found in New England, pavement ants travel in packs and at a relatively slow pace. They push up dirt and build nests along the edges of paved driveways where they can easily make their way into your home. 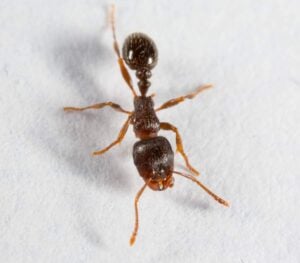 Life Cycle of an Ant

Ants are social insects and live in colonies with three distinct types of adults called castes.

Queens are larger than their peers and are responsible for egg laying. Some species have only one queen per colony whereas others have many.

Males are responsible for mating with the queens; they do not participate in any other activities.

Workers are sterile wingless females. They make up the bulk of the colony and are responsible for building and defending the nest, caring for the young, and foraging for food.

New colonies are established by a single fertilized queen that lays hundreds of eggs. After about 30 days the eggs hatch into legless larvae that do not resemble adults.

The queen cares for the “maggot-like” larvae until they pupate approximately 1-2 months later. Within three weeks the pupae transform into adult workers, which begin collecting food for themselves, the queen, and future generations of larvae.

Eggs are laid continuously throughout the spring, summer, and fall. Colonies overwinter in the soil, woody areas, or in garden trash.

How to Prevent Ants from Coming Inside Your Home

In order to avoid an ant problem in the first place, prevention is key. Here are some easy tips to help you prevent ants from coming inside your home:

How to Get Rid of Ants Using Non-Toxic Methods

Here are some of the best natural, home remedies you can use that are non-toxic and can help you get rid of ants:

Diatomaceous earth (DE) is a naturally occurring, silica dust made from the fossilized remains of tiny, aquatic organisms called diatoms.

DE contains no toxic poisons and works quickly on contact. Dust lightly and evenly around ant trails or other areas where insects are found.

Ants use their sense of smell to get around, and the smell of pepper irritates them. Sprinkle black pepper or cayenne pepper along your baseboards and behind appliances to keep them out.

If you notice an anthill in or near your home, sprinkle it with black pepper or cayenne pepper. This will keep them away but won’t kill them.

For this method, combine a few drops of essential oil with a cup of water and spray the mixture over your home’s baseboards, windows, and doors.

White vinegar is another one you can use. If you find ants in your home, create a solution of equal parts vinegar and water and wipe them off.

Not only will this kill existing ants, but it will also repel future ants by leaving a lingering vinegar scent that acts as a natural ant repellent.

Ants hate baking soda. That’s because baking soda and borax both kill ants when they eat them.

Place it in a shallow container and leave it out wherever you usually find ants in your home.

You can also pour this mixture into a spray bottle and mist it on a cotton pad and leave that out instead.

The rinds of citrus fruits, particularly oranges and lemon, contain an ingredient called d-limonene that is poisonous to ants. Instead of tossing away those orange peels, save them and use them to make an ant repellent.

So consider squeezing a lemon for some lemon juice or taking the peels and placing them where you normally find ants in your home.

Another great option is Boric Acid. Within three weeks of being exposed to it, boric acid will kill both worker ants and the colony’s queen.

Dust it lightly into cracks, crevices, wall voids, and other insect hiding places.

This fine powder clings to the legs, antennae, and bodies of crawling insects and has an active ingredient that acts as a stomach poison when consumed during grooming.

You can spread a few tablespoons near an individual mound or across the entire yard.

How to Get Rid of Ants Using Conventional Methods

We’ve looked at some home remedies to get rid of ants, but here are the top conventional methods you can also use:

Ant baits come in a variety of forms, such as gels, liquids, granules, and solids.

All ant baits have a pesticide and an attractant or a combination of attractants, which are usually a sugar, carbohydrate, or protein.

The active ingredient is intended to have a delayed onset and kill the ants immediately.

This method works well because of how ants operate. The queen and the male ants are fed by the worker ants, who are responsible for finding food and bringing it back to the colony after they have collected it.

So If you’re looking for an effective fix, we recommend you apply Organic Insect Killer Granules around foundations, lawns, and landscaped areas to eliminate or repel all kinds of crawling insects.

Another great way to keep these industrious insects from coming indoors is to locate the mound and destroy the colony. Set pre-filled outdoor bait stations where pests are found.

Ant traps work a lot like baits, but they don’t let the ants get away. These traps may also include poison, which quickly kills ants.

Ant sprays can be used indoors or outdoors. It kills ants right away and can get rid of a lot of them quickly.

Spray Orange Guard in and around the kitchen to kill on contact. Approved for organic use, Orange Guard is a broad-spectrum insect killer that’s safe to use inside or out. Repeat applications may be necessary.

Another great one to try is Safer Ant & Roach Killer. It is the first effective, truly organic aerosol ant killer, killing crawling insects in seconds. Best of all, this pest control has a fresh citrus scent, so there is no chemical odor! 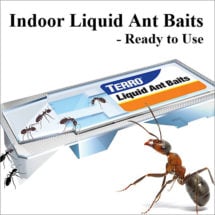 Liquid formula provides an irresistible sweet treat that they carry back to the colony. 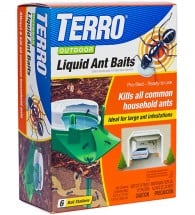 Pre-filled and ready to use! Liquid borax works outside so they don't come inside. 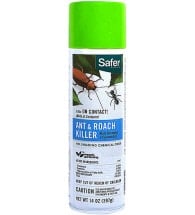