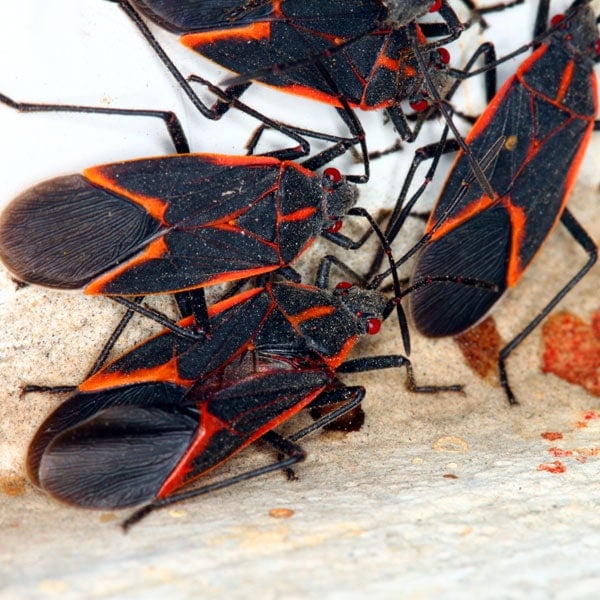 If boxelder bugs have infested your house, then this guide will teach you how to identify them, understand the potential damage, and effectively rid your home of boxelder bugs and prevent them from returning.

Boxelder bugs (Boisea trivittata) are named for their primary host, the boxelder tree. One of the less destructive agricultural pests, boxelder bugs do infrequent damage to apples, peaches, grapes, strawberries, plums, and non-fruiting trees including maple and ash.

A bigger nuisance to homeowners, they seek and enter houses in colonies of hundreds, even thousands of insects as cold weather approaches, congregating in walls and warm basements, making themselves at home all through winter and occasionally emerging into kitchens, living rooms, bedrooms, and other human-inhabited spaces.

There’s nothing like watching your toddler bring a stray, otherwise harmless boxelder bug that’s making its way across the carpet up to her mouth. It’s an experiment children won’t likely repeat.

Boxelder bugs, though mostly scentless, give off a pungent odor when disturbed or crushed. Also offensive: the accumulation of excrement and dead bugs that fall from the colonies inside walls and other hard-to-access places.

Read on to learn everything you need to know about boxelder bugs.

What is a Boxelder Bug?

Boxelder bugs are ‘true bugs’ that belong to the order Hemiptera in the family Rhopalidaethe, which includes stink bugs, cicadas, and other insects with piercing and sucking mouthparts. When crushed, they release an unpleasant smell.

Their common name comes from the fact that they are frequently found on and around boxelder trees. Although it is native to the western states, this species can be found anywhere that boxelder trees grow, including the eastern United States, eastern Canada, and western Nevada.

Boxelder bugs are primarily considered a nuisance pest because they enter structures such as homes, sheds, and garages in order to spend the winter there. 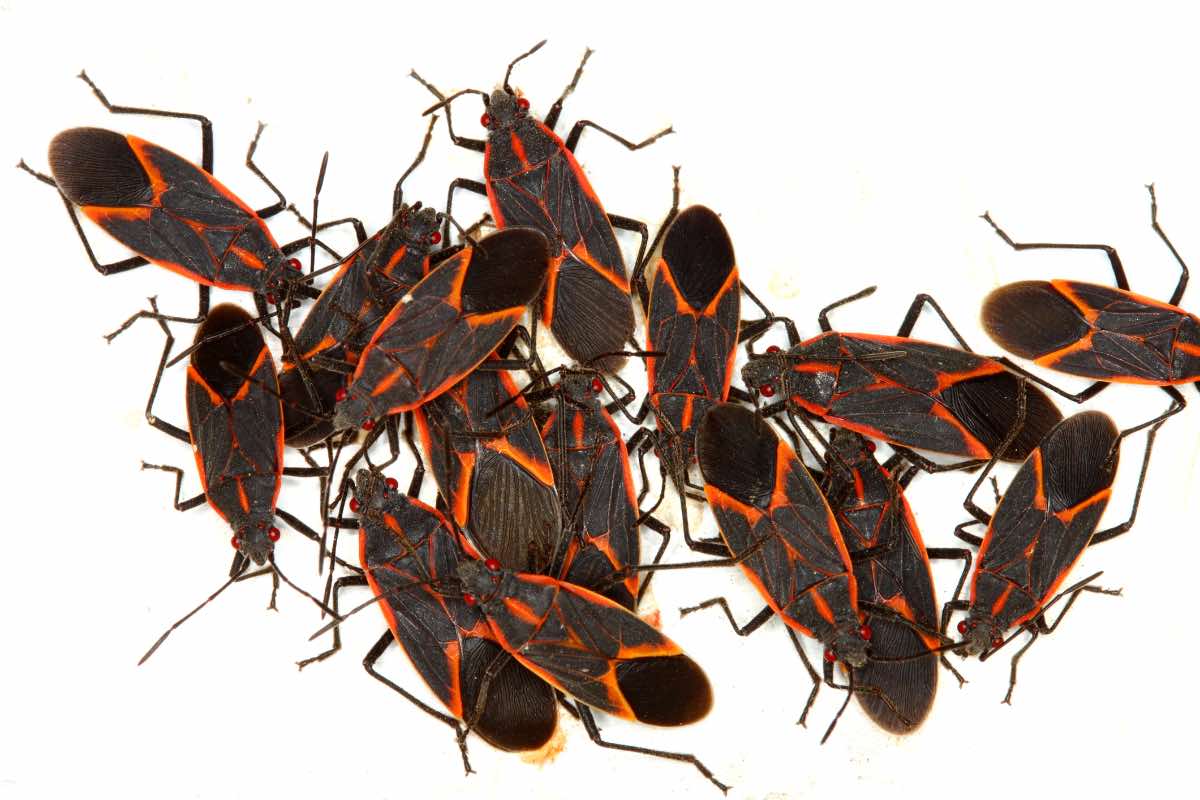 Life Cycle of a Boxelder Bug

Adults survive the winter sheltered beneath loose tree bark, in plant debris, or in homes, garages, and outbuildings.

They emerge as the weather warms in spring. Staying close to the ground, they feed for two weeks on boxelder seeds and other vegetation before starting the mating cycle.

Female bugs fly up female boxelder trees and lay eggs on seed pods and the undersides of leaves. They will also leave eggs on stems and branches. Eggs take 10-14 days to hatch.

During the summer, all stages of the boxelder can be found in and around host trees. While nymphs continue to develop into the fall, only adults survive cold weather.

Although boxelder bugs are not known to bite, their piercing-sucking mouthparts have been known to puncture the skin on rare occasions, causing a slight itch and leaving a red spot resembling a mosquito bite.

How to Identify Box Elder Bugs

Adult boxelder bugs, the stage most often seen in homes, are dark with three distinct orange or red markings the first centered behind its head, the other two running along the sides of its body. The adult’s abdomen is also orange. About 1/2 inch long, its dark wings cross along its back.

Eggs, found on leaves, the seed pods of boxelder trees, and in-ground vegetation, are yellow and clustered in groups that begin to redden as the nymph develops. Nymphs go through five stages, continuing to turn red as they mature.

Adults are sometimes mistakenly identified as stink bugs, which they generally resemble, as well as squash bugs, and the red-shoulder bug. The three lengthwise red lines on the pronotum distinguish boxelder bugs from these other species.

These nuisance pests can cause varying degrees of damage both indoors and outdoors. Let’s look at each in more detail:

Box elder bugs are sap suckers, penetrating plant tissue with their considerable proboscis and using secretions to make it consumable.

They almost exclusively feed on the Boxelder bugs usually eat the leaves, flowers, and seedpods of the female or seed-bearing box elder tree (Acer negundo), as well as the maple trees and vines and its spinning ‘helicopter’ seed pods, but have also been known to feed on fruit during dry summers.

Infestations on box elder trees may cause their leaves to yellow and curl or leave spots on stems and new growth. Most trees survive.

They may consume the fruits of almond, cherry, apple, peach, pear, and plum trees. Damage to grapes, peaches, and other soft fruits is mostly cosmetic, appearing as depressions, sometimes as bruises.

While a nuisance, boxelder bugs do relatively little damage to fruit crops, preferring to feed and procreate in their namesake tree. 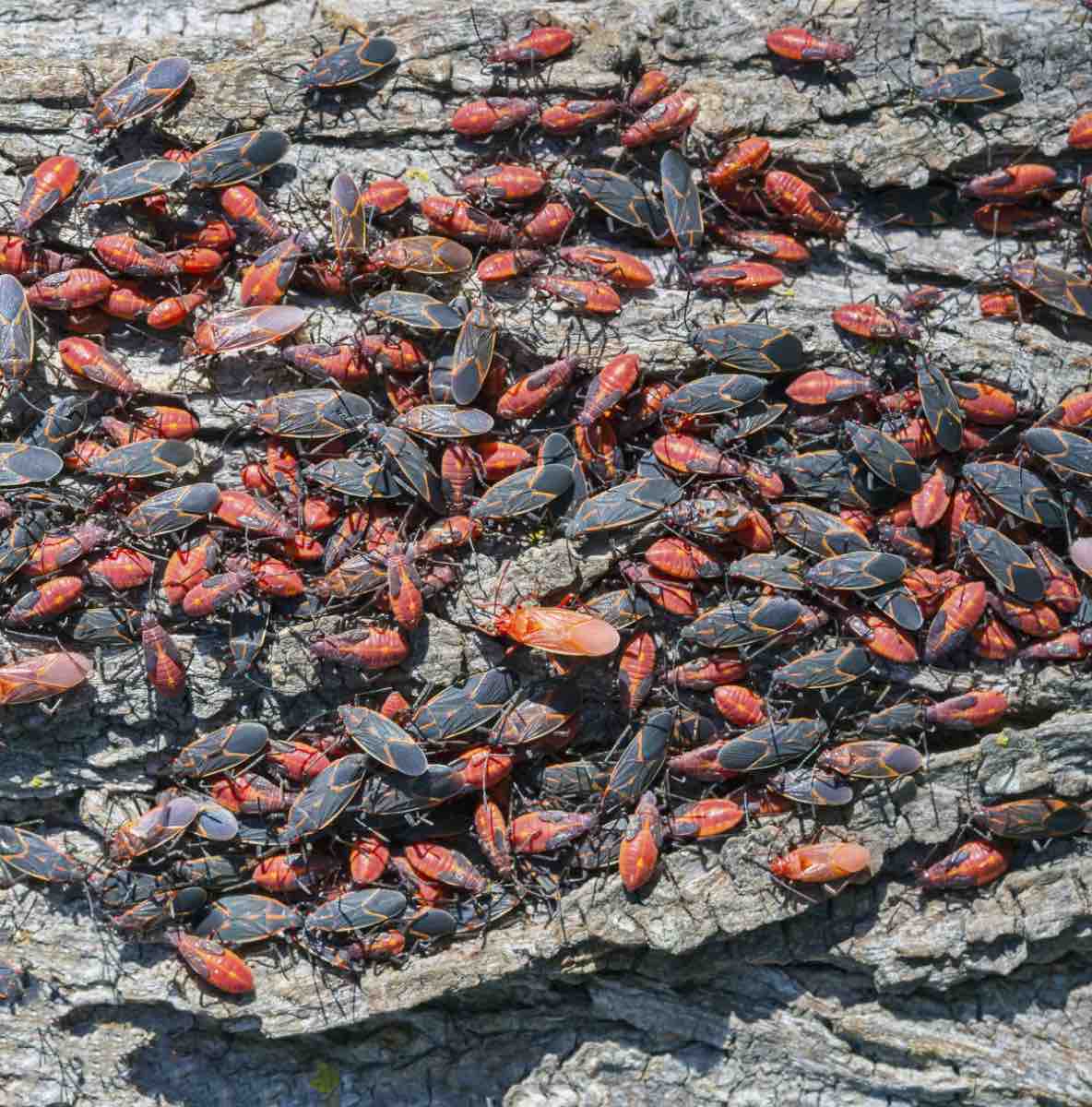 Indoors, the bugs can be a major problem. After amassing in large numbers, these insects migrate to nearby structures or homes to overwinter. Most of the time, these pests hide in small cracks and crevices in walls to keep warm during the winter.

While they don’t normally cause structural damage to homes or contaminate food sources (individuals will occasionally show up in dried beans and flour if not stored in tightly sealed containers), they can be a source of filth, odor, and displeasure due to their sheer numbers.

Their fecal matter leaves a red stain on curtains, drapes, clothing, etc. Warm weather or an increase in home heating may convince individual boxelder bugs that spring has arrived and they will enter a family’s living space in search of a way outside.

In late summer and autumn, then they gather in groups much like swarms of bees on the sun-facing, preferably white side of homes and garages where their sheer numbers will discolor the building’s side if allowed to stay. 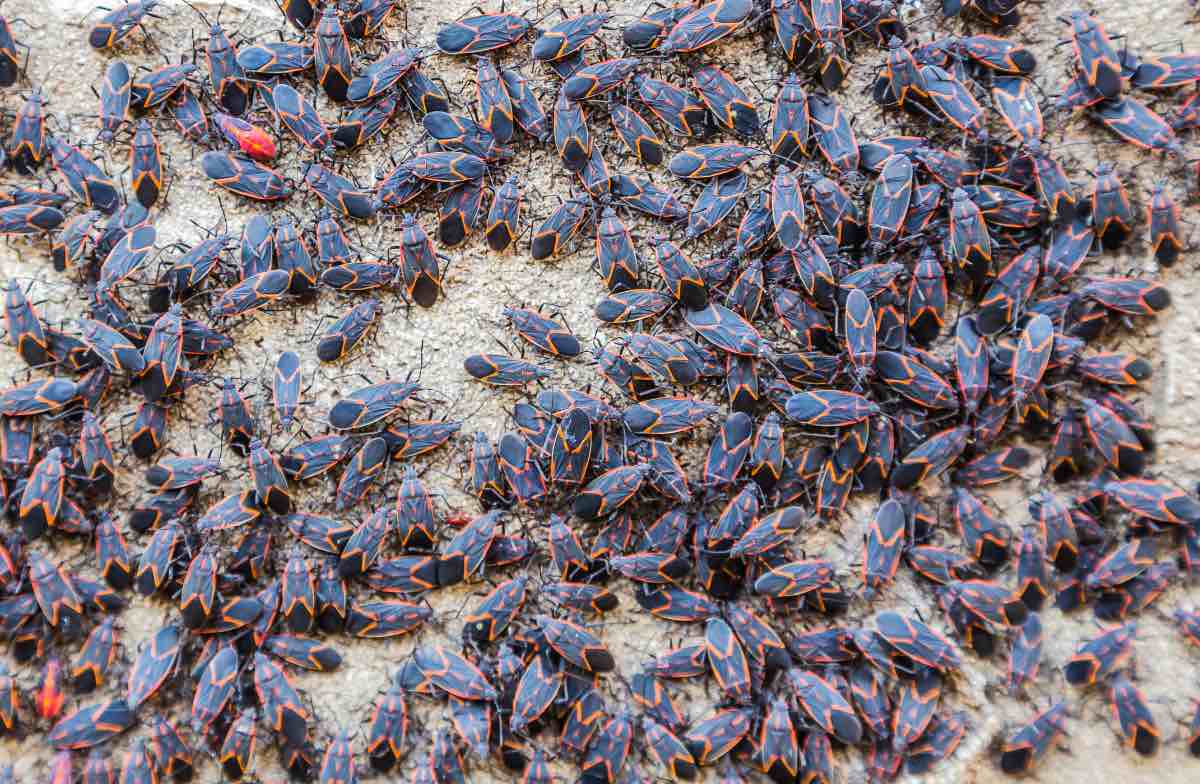 Indoor and outdoor boxelder control are interrelated. Destroying boxelder colonies outdoors means few bugs looking for a way into our home come fall. Denying places in your home for boxelders to overwinter means fewer numbers laying eggs in your trees next spring and summer.

Most outdoor boxelder damage is minor and, most years, won’t require treatment most years. Some years will produce more boxelder bugs than others. Dry years may encourage the bugs to seek out fruit. Wind plays a great role in the dispersal of flying boxelder bugs.

Chemical pesticides are a poor option for boxelder infestations. Their use indoors can pose a hazard. Dusting of colonies may kill thousands of bugs but will only encourage other insects and rodents who feed on the dead bodies. The common and troublesome carpet beetle is attracted to dead boxelder remains. There it feeds and lays eggs, guaranteeing another generation of increased numbers to damage in your home.

Seal Around Doors and Windows

Preventing box elders from entering your home is the single most important defense. Seal around window frames and door screens, where utilities enter the house, cracks in the foundations, and under eaves. Use a good quality silicone or silicone latex caulk to seal cracks and crevices. Make sure doors are weather-stripped at the bottom by installing door sweeps to all exterior entrances, leaving no space. Screen off vent pipes and other roof openings with fine screens to prevent the bug’s entry.

Repair any loose siding which, like loose bark on a tree, allows the bugs to get behind the siding and against the house. Patch any cracks in plaster or stucco-sided houses.

Eliminate wood piles, landscape debris, and other places boxelder bugs will gather to survive the winter.

Use a Vacuum Cleaner Indoors

If boxelder bugs have already moved into a home or building, they shouldn’t be killed in the wall voids because dead bugs can attract dermestid beetles such as larder beetles, carpet beetles, etc. It is advised to wait until summer when all adult overwintering insects are out of the wall voids. Use a vacuum cleaner to get rid of the boxelder bugs for some temporary relief during this time.

Spray Away with a Garden Hose

Boxelders found in clusters on trees or the sunny side of houses can be sprayed away with a garden hose. A hard spraying is sometimes enough to convince the surviving bugs they should go somewhere else.

Apply an Insecticide Around Doors and Windows

In the fall, boxelder bugs tend to congregate in large numbers around doors and other entryways. Apply an insecticide to the areas around windows and doors where insects collect.

Use Hot Water with Caution

Hot water between 160-180˚F will kill the bugs but, at these temperatures, can also burn the sprayer. Use extreme caution if you have a source of water this hot to use and do so only outside.

Trees can be sprayed with horticultural oil early in the season as boxelder bugs begin to emerge. Cover thoroughly making sure to get under loose bark as best possible. Spray only while the tree is still dormant or in the green bud stage.

Swarms found on trees and houses can be sprayed with insecticidal soap. Repeated spraying may be necessary.

Pyrethrin sprays will kill boxelders at all levels of their lifecycle. It’s a good choice for middle and late season use when the bugs may exist in various stages of their development, egg through adult.

Sometimes your best weapon when facing colonies of boxelder bugs is a shop-vac. Vacuum colonies from the sides of houses and around window sills into a bagless, wet-dry vac canister with a quarter to half inch of soapy water in the bottom which will suffocate the bugs. If you find and can access boxelder colonies behind walls, remove them with the vacuum.

Use Borax or Diatomaceous Earth

Sprinkling borax or diatomaceous earth at the bottom of window sills and around door jambs will discourage their entry. Crack and crevice sprays — like Don’t Bug Me — will break down quickly in the environment and are also good for this use.

Because it’s the chosen habitat and breeding ground of the bug, female boxelder trees are sometimes removed to decrease the insect’s numbers.

This seems a rather radical move and is a mostly fruitless one as well, especially in areas where boxelder trees are numerous.

The insects’ eggs disperse on seed pods — the “helicopters” produced by boxelder trees — and adults will fly as far as two miles seeking new sources of food and breeding grounds.

Tree removal is not recommended unless yours is the only boxelder tree for miles around and the bugs have been a persistent problem.