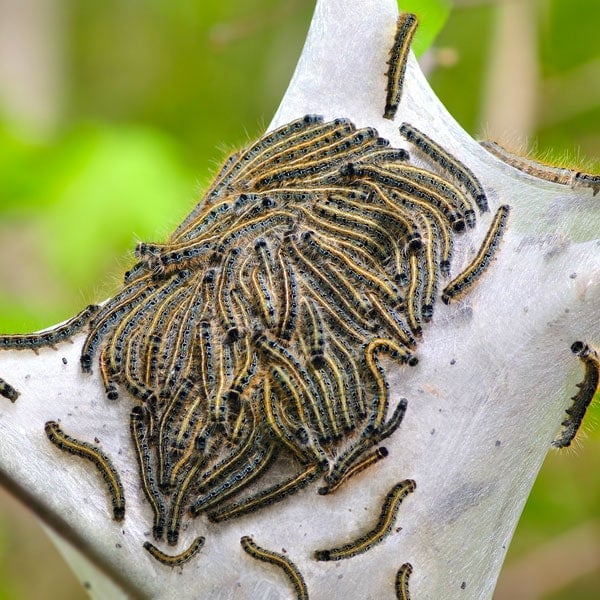 The larvae of several moth and butterfly species are collectively referred to as tent caterpillars. Here’s how to get rid of them naturally without resorting to toxic sprays.

The larvae of several moth and butterfly species (listed below) are collectively referred to as tent caterpillars. Distributed throughout much of the United States and Canada, these caterpillars multiply rapidly and can defoliate a large number of deciduous trees and shrubs in a short time. They are often seen on roadside trees and in neglected orchards. Besides defoliation the larvae produce large unsightly webs, or tents, in the crotches of tree branches. These webs are used to protect the caterpillars from predators and the elements. Although tent damage is unsightly, infestations rarely threaten the lives of trees. Four species are commonly discussed:

Eastern Tent Caterpillar (Malacosoma americanum) – Found east of the Rockies and north into southern Canada. Full grown caterpillars (2 inches long) are sparsely hairy and black in color with a row of pale blue spots on each side. They have a white stripe down the center of their backs that makes them easy to identify. Adults (1-1/2 inches long) are reddish brown moths with two white bands running diagonally across each forewing. Host plants include cherry, apple and crabapple, but may be found on a variety of shade trees as well.

Western Tent Caterpillar (Malacosoma californicum) – Troublesome in the northern and western portions of the United States and adjoining Canada. These hairy caterpillars (2 inches long) are yellowish-brown in color and have a row of blue spots on their backs, with orange spots interspersed in between. Adult moths (1-1/2 inches long) are orange-brown in color with two narrow yellow lines on the wings. Willow, poplar, cottonwood, birch, apple, plum, cherry, roses and oak are favorite host plants of this pest.

Forest Tent Caterpillar (Malacosoma disstria) – Found throughout the United States and Canada wherever hardwoods are found. Despite its name, this pest does not spin a true tent; instead, it forms a silken mat on the surface of branches where they congregate. Larvae are similar in appearance to M. americanum but have a series of keyhole-shaped white spots running down their back instead of a solid line. Adults are light yellow to tan colored moths (1-1/2 inch long) with two dark bands on their forewings. Host plants include wild cherry, aspen, maple, oak and hawthorn.

Fall Webworm (Hyphantria cunea) – Common across North America and Mexico, webworms are known to feed on over 85 species of trees. Unlike tent caterpillars that build a nest in the crotch of trees, webworm tents are located at the outer ends of branches and often include leaves. Caterpillars (1 inch in length) are covered with long hairs and vary in color from yellow to green, with a black stripe on the back and a yellow stripe on each side. Their heads are either red or black. Adult moths (1 inch long) are pure white in color and usually have dark spots on the wings.

Most species of tent caterpillars overwinter in the egg stage. Dark brown to gray egg masses containing 150 to 400 eggs are attached around the small twigs of trees and shrubs. Hatching takes place about the time that leaf buds begin to unfold, usually in early spring. Caterpillars are gregarious and soon construct silken tents which they uses as a refuge during the early morning and evening hours and during rainy spells. They leave their protective tent and feed only during the day, laying down a silk trail as they crawl to help them find their way back to the shelter. Approximately six weeks after hatching, and five instars later, the larva become fully grown (up to 2 inches long, sparsely hairy). Pupation occurs in silken cocoons which are found on tree trunks, fences, or leaf litter. About two weeks later adult moths emerge and soon deposit the overwintering eggs. There is one generation a year.

Note: Larvae can be a nuisance when they begin to migrate to protected areas to pupate. They are often found by the thousands traveling over roads, streets, driveways, walkways, fences and buildings.

Note: More than 80 species of predators and parasites have been identified in the United States, yet they are not commercially available. These insects play an important role in maintaining pest populations during most years. As a result, care most be taken when applying pesticides to minimize damage to these beneficial organisms.