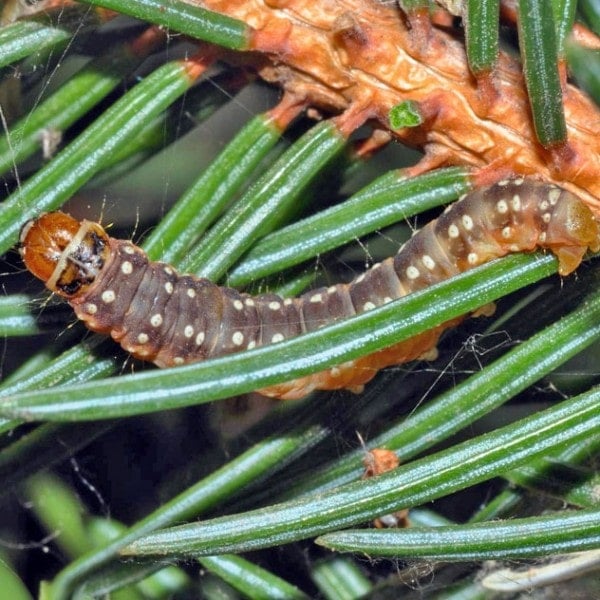 How to identify and effectively get rid of spruce budworm using proven, natural and organic control strategies.

The western spruce budworm, Choristoneura occidentalis, is the most widely distributed and destructive forest defoliator in western North America. In the Rockies, they most commonly infest Douglas-fir and white fir. Occasionally, they also attack Engelmann spruce, blue spruce and sub-alpine fir.

Adult moths are 1/2-inch long and have a wing-spread of 1-inch. Moths of both sexes are similar in appearance, although the females are a bit more robust than males. Both sexes fly. The gray or orange-brown forewings are banded or streaked, and each usually has a conspicuous white dot on the wing margin. Eggs are oval, light green and overlap like shingles.

Throughout most of its range, the Western Spruce Budworm completes one cycle of development from egg to adult within 12 months. Moths emerge from pupal cases usually in late July or early August; in the southern Rockies, adults often begin emerging in early July.

Adults mate and within 7 to 10 days the female deposits her eggs and then dies. Each female deposits approximately 150 eggs, usually on the underside of conifer needles. Eggs are laid in one to three-row masses containing a few to 130 eggs with an average of 25 to 40 eggs per mass.

Pest larvae hatch from eggs in about 10 days. Larvae do not feed, but seek sheltered places under bark scales or in and among lichens on the tree bole or limbs. Here, they spin silken tents in which they remain inactive through the winter.

In early May to late June, larvae leave their hibernacula to search for food. They first mine or tunnel into year-old needles, closed buds or newly developing vegetative or reproductive buds.

New foliage, which is normally the preferred food, is entirely consumed or destroyed before larvae will feed on older needles. Larvae become full grown in early July about 30 to 40 days after leaving their overwintering sites.

Larvae pupate in webs of silk they have spun either at the last feeding site or elsewhere on the tree. The pupal stage lasts about 10 days.