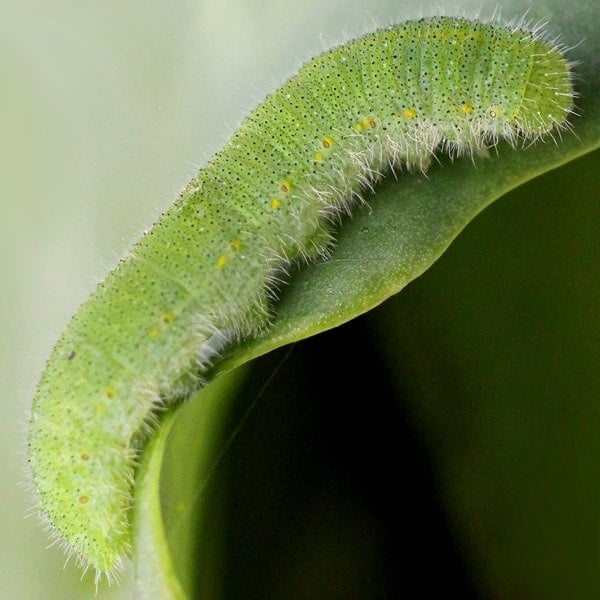 How to Identify and Get Rid of Cabbage Worms Effectively

Now common throughout the United States, the imported cabbage worm (Pieris rapae) does great damage to brassica and other cabbage-family crops in fields and gardens where it gains a foothold.

Although the larvae of this garden pest move sluggishly, it is extremely destructive, especially later in the growing season when populations can build significantly.

If you suspect a cabbage worm infestation in your home garden, you’ve come to the right place! Here at Planet Natural, we’ve put together a complete guide to help you not only identify cabbage worms and their damage but also learn exactly how to get rid of them regardless of the stage you discover them.

So keep on reading to learn everything you need to know about cabbage worms!

What is a Cabbage Worm?

Cabbage worms (Pieris rapae) are the same pest as the imported cabbage worm, with adult butterflies sometimes referred to as cabbage whites or small whites.

These small white butterflies are native to Europe, Asia, North Africa, and South America but are unfortunately common throughout the United States after being accidentally introduced here.

A cabbage white butterfly may appear to be a beautiful addition to the garden, but they are most likely laying eggs on the undersides of leaves and spreading infestations.

There are many different kinds of cabbage worms. In the United States, the most common ones are the imported cabbageworm (Pieris rapae), the cabbage looper (Trichoplusia ni), and the diamondback moth (Plutella xylostella).

These pests can cause widespread damage, so controlling and getting rid of them should be of utmost importance once they’re spotted in your home garden.

As their names suggest, they are particularly drawn to cabbage and mustard plants. This group of vegetables, also referred to as the brassica family, includes turnip greens, mustard greens, kohlrabi, rutabaga, broccoli, kale, collard greens, brussels sprouts, and, of course, cabbage.

But wait, there’s more! Cabbage worms have been discovered on a wide range of other plants in many home gardens, including flowers such as Hyssop.

How to Identify Cabbage Worms

The imported cabbageworm (1-1/4 inch long) are velvety green larvae and have many short fine hairs and faint yellow stripes down its side and back. Its five sets of pro-legs are easily visible.

They should not be confused with cabbage loopers, which are yellow-green caterpillars. The key to identifying cabbage worms is to look for the faint yellow stripe on them.

Adults grow into white or pale yellow butterflies (1-2 inch wingspan) with three or four black spots on their wings. They are frequently noticed fluttering about the garden from early spring to late fall.

Life Cycle of a Cabbage Worm

Adult females emerge in early spring after overwintering as green pupae. They lay up to 200 tiny yellow eggs on host plants, usually on the undersides of leaves or along the leaf veins. These hatch in 7 or more days (depending on temperature) into young larvae caterpillars.

The larvae feed heavily for 15 or more days, then pupate on lower leaf surfaces or nearby garden objects.

During late spring and summer, the worm pupates for 10 days before a new generation of butterflies emerges. There are 3 to 5 overlapping generations each year, as many as 8 in warmer areas.

In the larval stage, cabbage worms will feed on the surface layer of leaves, leaving behind translucent, tissue-like scars.

As they grow, they chew large, irregular holes usually beginning on the outside leaves of cabbage and other cole and mustard crops (broccoli, cauliflower, kale, turnip, radish).

These pests feed on foliage and will often reduce mature plants to mere stems and large veins if left unchecked.

As the worm feeds, it commonly bores into the center of cabbage heads contaminating them with its fecal pellets and leaving stains. The dark-green pellets can also be found in the crook of leaves near the stem.

These larvae are frequently immobile and difficult to dislodge, and they may go unnoticed when washing produce.

How to Get Rid of Cabbage Worms (Effective Cabbageworm Control)

The imported cabbageworm is one of many worms that attack garden plants. Luckily, control tactics aimed at a particular worm, be they loopers, armyworms, cutworms, or diamondback moths, are usually effective against all.

On the other hand, some companion plants can serve as a “trap crop” and attract cabbage worms – while luring them away from your veggies! Nasturtiums are a prime example. However, be sure to periodically remove infested trap crop plants to prevent a booming population of cabbage moths in your garden.

Early Season Methods to Get Rid of Cabbage Worms

Late Season Methods to Get Rid of Cabbage Worms