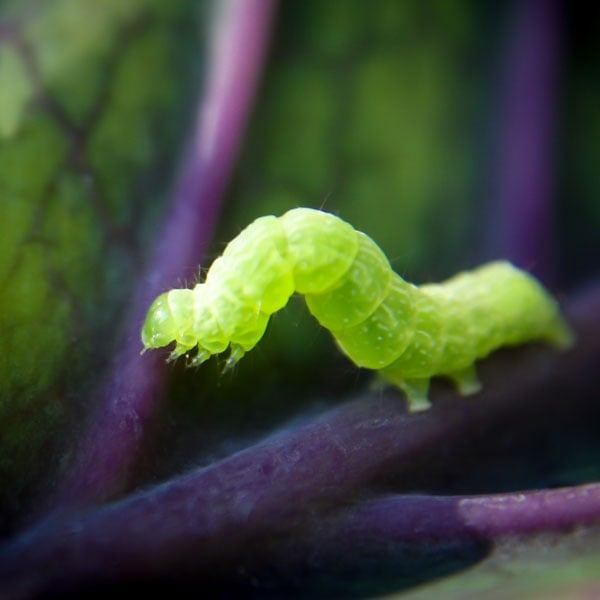 Widely distributed throughout North America, the cabbage looper (Trichoplusia ni) is a common and destructive pest most often found on cabbage-family, or cole crops. The larger its larvae grow the more damage they do. In the larval stage, cabbage loopers eat three-times their body weight in plant material a day, doing the most harm during the last few days of their development.

Loopers, commonly known as inch worms, are most easily recognized by their unique method of movement in which they double up or “loop” as they inch along. This characteristic trait comes from the absence of legs at the looping segments. The six-legged looper could use the eight that other leaf worms have.

Larvae are large (1-1/2 inch long), pale green caterpillars with a narrow white stripe along each side and several narrow lines down the back. Adults are night-flying, gray moths (1-1/2 inch wingspan) with a silvery, V-shaped spot in the middle of each dusky forewing.

Note: Discerning cabbage loopers from the larvae of garden webworms, diamond back moths, and other inch worm type larvae is not critical to their management. The same integrated pest management practices work on them all.

Pupae spend winter attached to host plants or in nearby garden debris. Moths emerge in the spring and become widely dispersed including north into areas too cold for winter survival. The moths deposit pale green, domed eggs on the plants. The eggs hatch in 3 or 4 days. The destructive larval stage reaches full development in 2-4 weeks. They pupate in thin silk cocoons attached to the stems or undersides of leaves, and adults emerge within 10 days. Loopers as far north as Canada will go through two to three generations in a year and several generations per year are possible in warmer areas.

Cabbage loopers occur as far south as Mexico and are established in commercial fields with insufficient rotation there and in the U.S. They mainly attack cabbage crops including broccoli, cauliflower and kale. Young larvae eat only from the bottom of leaves. Older larvae chew large, irregular holes in the leaves of many plants. Loopers bore into the center of cabbage heads leaving behind masses of wet, slimy fecal matter. Once established, loopers are difficult to get rid of. In addition to cruciferous plants, cabbage loopers will also attack lettuce, spinach, celery, cucumbers, and tomatoes. Each year, large amounts of pesticides are targeted at loopers on commercial fields, causing serious degradation of water and soil.

Cabbage looper damage becomes ruinous at some point. Many gardeners tolerate a single tunnel into a cabbage (PDF) or irregular scars on their Brussel sprouts. This kind of damage may be unavoidable in the organic garden. But it’s important to take action at that point before eggs hatch and a second generation prepares to make slaw of what’s left. And an ounce of prevention? Well, you know what it’s worth.

Rotating cabbage crops in a family sized garden is a good idea but not necessarily effective in preventing loopers on your plants. The night flying moths disperse widely and will find your vegetables no matter how far you’ve moved them. That’s why floating row covers to keep moths from landing on leaves and depositing eggs, are a good idea.