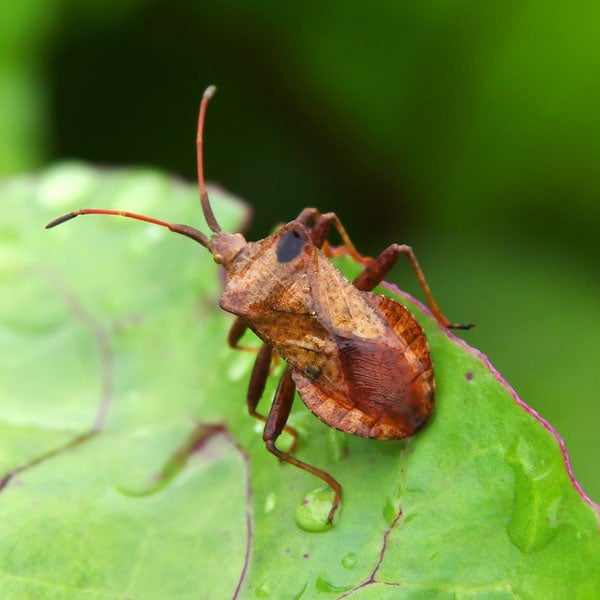 These destructive insects are often found feeding in large numbers on pumpkins, cucumbers and winter squash. Here’s how to get rid of squash bugs using proven, organic methods.

Squash bugs are destructive insects that are often found feeding in large numbers on pumpkins, cucumbers, and winter squash.

Well known and widely distributed in North America, the squash bug (Anasa tristis) is a potential problem in all vegetable crops in the cucurbit family.

They are often found in large numbers and tend to congregate in clusters on leaves, vines, and fruits.

Injury is caused by both nymphs and adults sucking sap from the foliage and vines of squash, pumpkins, cucumbers, and other closely related plants.

As they feed, they inject a toxic substance that causes host plants to wilt. When feeding is severe the leaves become black and crisp and die back.

This condition is often referred to as ‘Anasa wilt’ which closely resembles bacterial wilt, a true plant disease.

Smaller plants may be killed, while larger plants often recover once feeding stops. Heavy infestations may prevent fruit from forming.

Read on to learn what a squash bug is, as well as how to identify and get rid of it.

What is a Squash Bug?

Squash Bugs (Anasa tristis) are insects that are most commonly found on squash plants, hence the name, such as zucchini, winter squash, and pumpkins.

They consume the plant juices of these squash plants through their piercing mouthparts. This feeding causes yellow spots on plants that eventually turn brown.

They attack many members of the cucurbit family, such as cucumbers, and can cause plants to die completely.

As with its relatives, the squash bug assumes this shield-like shape. At first glance, they may appear to be entirely black, but their abdomens have slight variations in hue.

When they are bothered, they give off a smell that has been compared to cilantro, sulfur, ammonia, or rotten meat.

How to Identify Squash Bugs?

Adults (5/8 inch long) are dark brown or gray in color which keeps them well camouflaged around plants.

Known as true bugs, they have a hard shell with a long shield-like shape, two pairs of wings, and sucking mouthparts that originate from the tips of their head.

Spider-like nymphs (1/10 inch long) are voracious and feed together in clusters or groups. When young they are whitish green or gray in color with red heads, legs, and antennae. As they mature, they become grayish-white with dark legs.

Note: Squash bugs give off an unpleasant odor in large numbers or when crushed. 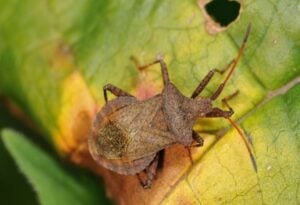 How to Identify Squash Bug Damage?

A squash bug injects toxic saliva into the feeding area as it sucks the juices from squash plants.

The first sign of squash bug damage is dark stippling or yellow spots on squash plant leaves and stems.

Over time, these stippled marks will turn yellow and then brown. Plants start to develop droopy leaves that resemble the signs of bacterial wilt as this process continues.

Unchecked squash bug populations may start to rely on the fruit of squash plants as it develops on the vine.

In this case, the damage is caused by lesions that can make fruit wilt quickly if the whole plant is stressed out enough.

The final symptom of squash bug damage is the death of the cucurbit plants they are feeding on.

The squash bug can serve as a vector for a bacterium (Serratia marcescens) that causes cucurbit yellow vine disease (CYVD), a relatively recent disease affecting cucurbits.

This bug not only spreads the pathogen but also harbors it inside of itself over the winter when there aren’t any plants around. 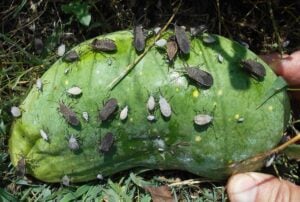 As temperatures begin to warm in the spring (late May and early June), squash bugs emerge and fly into gardens where they feed and mate.

Egg laying soon begins and continues until midsummer with females depositing small brown eggs usually on the undersides and stems of leaves.

Eggs hatch in one to two weeks and the young nymphs disperse quickly to feed.

Nymphs pass through 5 instars requiring up to 6 weeks to develop into adults. There is typically one generation per year.

Note: Because of the long egg laying period, all stages of this garden pest occur throughout the summer.

How to Prevent Squash Bugs

Squash bugs can be a real pest in the garden, but there are ways you can prevent an infestation in the first place.

Here are a few tips and tricks to help prevent squash bugs in your yard:

Plant resistant varieties when available. The Butternut, Royal Acorn, and Sweet Cheese varieties are all more resistant to squash bugs.

Companion planting can be useful in repelling squash bugs. Try planting nasturtium, catnip, garlic, onions, radishes, marigolds, calendula, and tansy around your plants that are commonly affected by squash bugs.

Trellis Your Squash and Melons

Squash bugs prefer to hide among the plants on the ground. Another effective way to keep squash bugs at bay is to trellis your plants rather than allowing them to sprawl.

They are less likely to conceal themselves in an upward trellis than in a squash mound or patch.

The parasitic tachinid fly, Trichopoda pennipes, is the most important beneficial insect for squash bug control.

This fly lays 100 or so eggs on the undersides of squash bug nymphs and adults. When the eggs hatch, the maggot bores into the squash bug’s body and feasts on its insides before emerging from between the bug’s segments.

In the process of emerging, these maggots kill squash bugs, allowing you to rid your garden of these pests. It works best when parasitizing nymph bugs rather than adults.

Include plants that attract this species in your garden, rather than simply introducing it.

These flies are also drawn to weeds like sweet clover.

Keep an Eye Out for Squash Bug Eggs

The most effective method for preventing an infestation is to search your squash plants for squash bug eggs every few days.

Look for the eggs by turning the leaves over. The eggs of squash bugs are small, shiny, oval-shaped, and copper-colored.

Squish or scrape them off into a container of soapy water to dispose of if you see them.

Floating row covers are one of the most effective ways to keep squash bugs at bay. They keep the adults out during the early summer breeding season.

This prevents future generations of squash bugs from feeding and laying eggs. Ensure that the row cover is properly secured to the soil to prevent infiltration.

Floating row covers (Harvest-Guard®) are extremely effective when placed on seedlings and left in place until plants are old enough to tolerate damage.

Researchers at Iowa State University found that mulching with newspaper and hay, before putting tightly secured row covers over gardens, reduced both weeds and pest numbers.

How to Get Rid of Squash Bugs

If you have a squash bug infestation in your garden, there are a few things you can do. Here are all the ways to get rid of squash bugs effectively:

If only a few plants are affected, handpick all stages from the undersides of leaves.

Drowning the bugs in soapy water is the simplest and quickest way to get rid of them. A simple bucket partially filled with water and dish soap is going to be your next best friend when dealing with these pests.

Carry this bucket with you when you inspect your garden every day. You can get rid of squash bugs by cutting or snapping off the bug-covered leaf. Alternatively, simply submerge them in water and let them drown.

Once they are dead, you can safely dispose of the water without fear of them reviving.

Use Boards as Traps

Place boards or shingles on the ground near host plants. Used as a nighttime shelter, they make excellent traps for morning collecting.

To do this, take a few boards and lay them around the base of your plants. Squash bugs crawl under the boards at night to find cover.

In the early morning, pick up each board and pick the bugs out of the garden by hand, or knock them off the board and drown them in a bucket of soapy water.

Diatomaceous earth contains no toxic poisons and works quickly on contact. Dust lightly and evenly over crops wherever pests are found.

Organic insecticides are more effective on nymphs than adult squash bugs when it comes to pesticides.

This is due to the fact that egg masses and bugs congregate near the vine crown and are difficult to reach with sprays.

One of the most effective organic sprays is neem oil. Make 2-3 applications of Neem Oil at 7-10 day intervals.

This organic insecticide works in multiple ways resulting in broad spectrum management of most insects that harm your vegetable garden. Best of all, it’s non-toxic to honey bees and many other beneficial insects.

If pest levels become intolerable, spot treat with a fast-acting organic insecticide. For best results, apply to the undersides of leaves and deep into the plant canopy where insects hide.