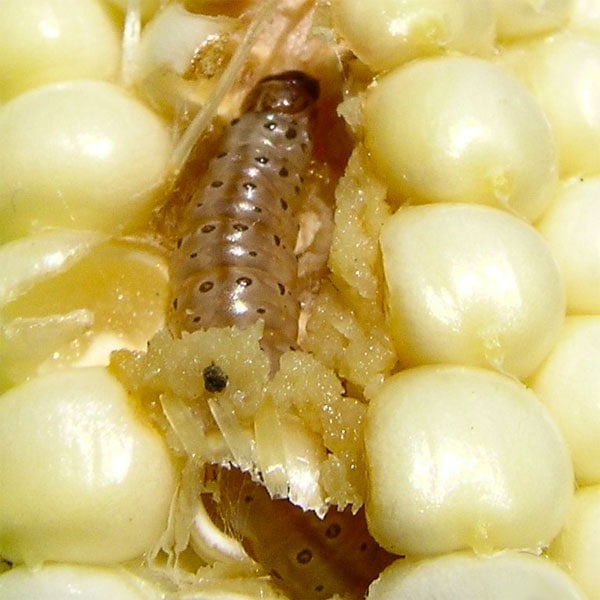 Originally found near Boston, Massachusetts in 1917, this destructive pest is now common across much of the country. Learn how to identify and get rid of European corn borers here.

A major pest of corn, the European corn borer (Ostrinia nubilalis) will also feed on over 300 different garden plants including peppers, snap beans, potatoes, tomatoes, apples and gladiolus. Damage to corn is caused by the young larvae which chew leaves and tassels. Later they tunnel all parts of the stalks and ears, resulting in reduced plant vigor, broken stalks, poor ear development and dropped ears. Other crops are damaged primarily by the tunneling of the stalks, pods or stems by the larvae.

Fully grown corn borer larvae (3/4 – 1 inch long) are extremely destructive flesh-colored caterpillars with a reddish or dark brown head and several distinct spots on the top of each abdominal ring or segment. The adult borer is a night-flying yellowish-brown colored moth (1 inch wingspan) with dark wavy bands across its wings.

Note : The European corn borer most likely arrived in the United States during the early 1900’s in imported corn which was used to make brooms.

Fully grown larvae pass the winter concealed in corn stubble or other plant parts on which they have been feeding. Pupation takes place in late spring with the adult moths appearing in May and June. When mature, the females begin laying clumps of white eggs on the undersides of the lower leaves of host plants. (Adult females may lay up to 500 eggs over their short lifetime.) Under ideal conditions, these first generation eggs hatch within 3-7 days. Tiny caterpillars begin feeding on host plants and complete their development in 3-4 weeks. Pupation occurs deep inside the corn stalks and second generation moths emerge and begin laying eggs in early summer. Produces 1-3 generations per year depending upon the climate.

Note: Second generation borers are considered to be the most damaging to corn.

Grower’s Tip:
Control nearby weeds to minimize the number of borers in your garden. Moths are attracted to these areas where they rest and mate resulting in proportionately more egg laying. Planet Natural offers a large selection of organic herbicides that won’t damage your health… or your soil.