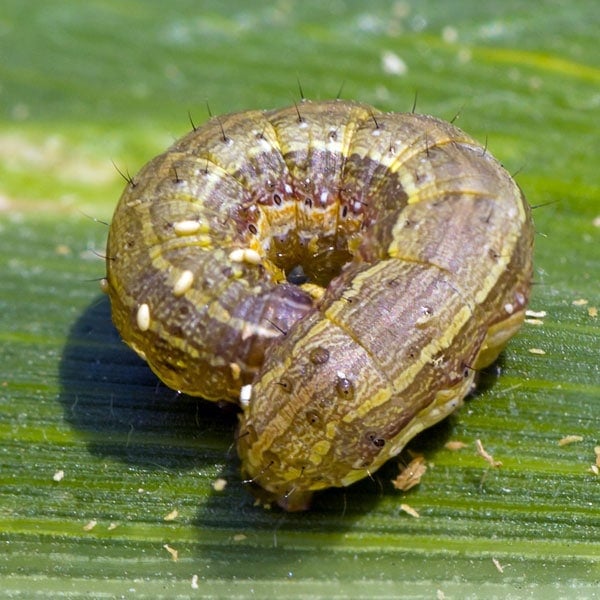 This destructive garden pest gets its name because it travels in small insect armies and consumes just about everything in its path. Here’s the natural, organic way to get rid of armyworms.

There’s a number of species of armyworm caterpillars, many with a distinct taste for a particular plant or vegetable. But some will eat anything green or red or yellow. They’re most active at night and hide in plants and under garden debris during the day.

In their larval stage, army worms attack a variety of crops as well as grasses, sometime moving en masse to new areas in a way that brings to mind, as its name suggests, an army on the march. The assault is mostly aerial, with the gray moths usually arriving under cover of darkness to lay eggs. The biggest invasion of army worms usually occurs after a cool, wet spring.

Markings on newly hatched caterpillars are usually hard to distinguish, older larvae have distinctive stripes that run the entire length of the body. Fall armyworms (Spodoptera frugiperda) are brown with yellow stripes, beet armyworms (Spodoptera exigua) are green with light stripes. Adults are gray, mottled moths (1-1/2 inch wingspan) with a small white dot in the center of each forewing and dark margins on the hind wings.

Note: Many areas are too cold to support overwintering army worms. But they’re often pushed north into these areas by strong spring winds and storms. Fall army worms cause serious defoliation to pastures and turf grasses in the southeast. Some of these army worms, as moths, migrate from as far away as the Caribbean.

Armyworms are prolific and responsive to favorable conditions. Their eggs are laid in fluffy masses on crowns of seedlings and on leaves of older plants. In 5-10 days tiny caterpillars hatch and feed for several weeks. They then pupate and emerge as adults 10 days later. Three and more generations are commonly produced each season — just as you’re ridding worms from the leaves of your garden plants, another generation is preparing to leave the soil to replace them — but some species of army worms will lay up to six times. In places with milder winters such as the deep south, armyworms will overwinter as eggs and pupae beneath the soil. In warm climates, they may be active all year.

In spring, larvae stay close to the ground, feeding on grasses and other low-growing plants. Later in the season, they move up to feed on plant leaves and fruit. Army worms “skeletonize” leaves of lettuce, cabbage, beans and corn. In tomatoes, they make shallow gouges in fruit. Corn is their favorite target. They feed on leaf whorls and burrow into the ears. Sometimes pulling back the husk from an ear in an infested field will reveal several worms drilling through kernels. Young, early-season corn is especially vulnerable to worm attacks. The damage from grass-loving fall army worms includes reduction of graze-able pasture for feed animals and unsightly lawns for homeowners.

If you don’t suffer army worm outbreaks, thank its natural predators, including birds, beneficial insects, and other larvae predators. If pest numbers are high, it suggests these natural predators have been done in by the very pesticides applied to kill the army worms. The absence of predators gives the re-generating pest a decided edge in your garden. So, to manage armyworms… 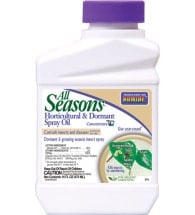 A superior type parafinic oil that degrades rapidly and has almost no toxicity.