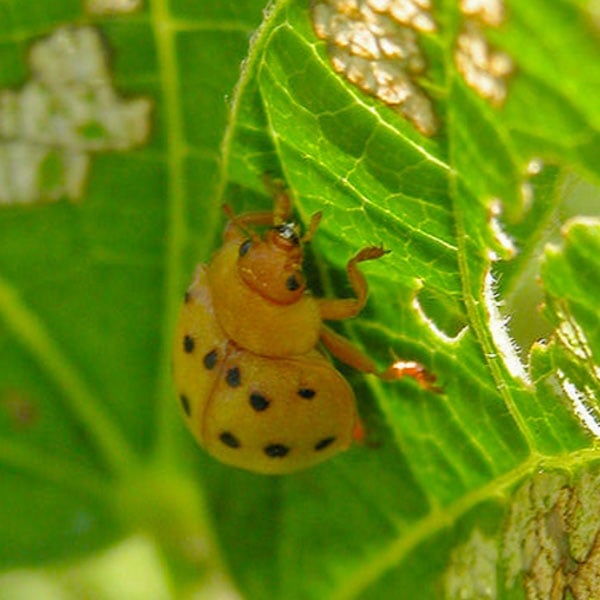 Proven, natural and organic methods to get rid of bean beetles in home vegetable gardens.

The Mexican bean beetle (Epilachna varivestis) is one of the most destructive insect pests of beans in the eastern United States and portions of the southwest. Both the adult and the larval stages feed on the undersides of the leaves, and sometimes will attack young pods and stems. As a result of feeding, only the veins are left, giving the leaves a lacy appearance. Damage is most severe in July and August and occurs on all bean varieties, including bush, pole, lima, pinto, navy, kidney, soybeans and cowpeas. Bush varieties seem to be attacked more readily than pole varieties.

Adult beetles (1/4 inch long) are similar in appearance to large ladybugs. They are yellow to coppery-brown in color, oval in shape, and have 16 black spots on their wing covers. Larvae (1/3 inch long) are fat, hump-backed grubs with fuzz or spines, arranged in six longitudinal rows on their backs. They are orange to yellow in color and attach themselves to leaf surfaces.

Adults overwinter in plant debris and other protected areas and emerge when the weather warms up in mid-to-late spring (usually when beans begin sprouting). After feeding for 1 to 2 weeks females begin to deposit yellow eggs in groups of 40 to 60 on the undersides of bean leaves. Larvae hatch in 5 to 14 days and feed for 2 to 5 weeks before pupating on the undersurfaces of leaves. Adults emerge 3 to 10 days later and live from 4 to 6 weeks. The period from egg to adult is about 30-70 days, depending on temperature. There are several generations each growing season. 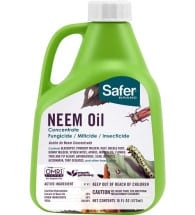 Kills and repels a large number of insect pests on vegetables, flowers and fruits.