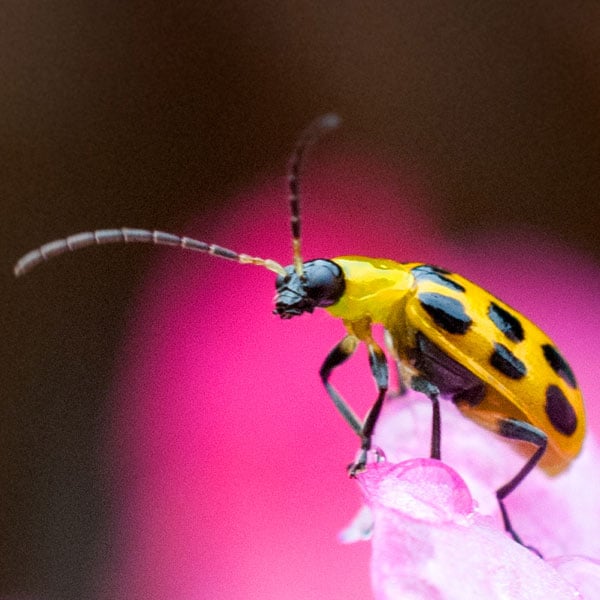 How to Get Rid of Cucumber Beetles in Your Yard Effectively

Cucumber beetles, whether striped or spotted, are voracious garden pests that can cause serious damage to cucurbit crops. Learn exactly what they are, how to identify them, as well as how to effectively control cucumber beetles using tried and tested methods!

Cucumber beetles are found across the United States, Canada to Mexico and are either striped (Acalymma vittatum) or spotted (Diabrotica undecimpunctata howardi).

Both species primarily feed on the leaves, flowers, and fruits of cucurbits (cucumbers, squash, pumpkins, and melons). Alternate plant hosts include beans, corn, peanuts, and potatoes.

Learning how to get rid of these pesky pests can be a life changer if you’ve ever come across them, and this guide will teach you everything there is to getting rid of cucumber beetles once and for all.

What are Cucumber Beetles?

Adults can be found on cucurbits like cucumbers, squash, pumpkins, and watermelons, hence the name. However, they can also be found on a number of other plants as well apart from just cucurbits.

The signs of a cucumber beetle infestation include damage to seedling stems, the yellowing and wilting of leaves, and the appearance of holes in the foliage.

How to Identify Cucumber Beetles?

Adult cucumber beetles (1/4 inch long) have dark heads, legs, and antennae. They can have 12 black spots or 3 parallel black stripes on their wings.

During the growing season, they feed on seedlings, foliage, pollen, and flowers, causing reduced yields and sometimes plant loss.

The slender white larvae (up to 1/3 inch long) have brown ends and injure plants by feeding on roots and underground stems. Heavy larvae populations can reduce plant vigor and damage melon rinds making the produce unfit for consumption or market.

The striped cucumber beetle (acalymma trivvittatum) is a major pest of cucurbits, feeding on the leaves and flowers of these plants.

These beetles overwinter and emerge in the spring and feed on pollen. They then go on to lay their eggs in the soil which hatch around a week later. These are black-bodied with 3 parallel yellow stripes. 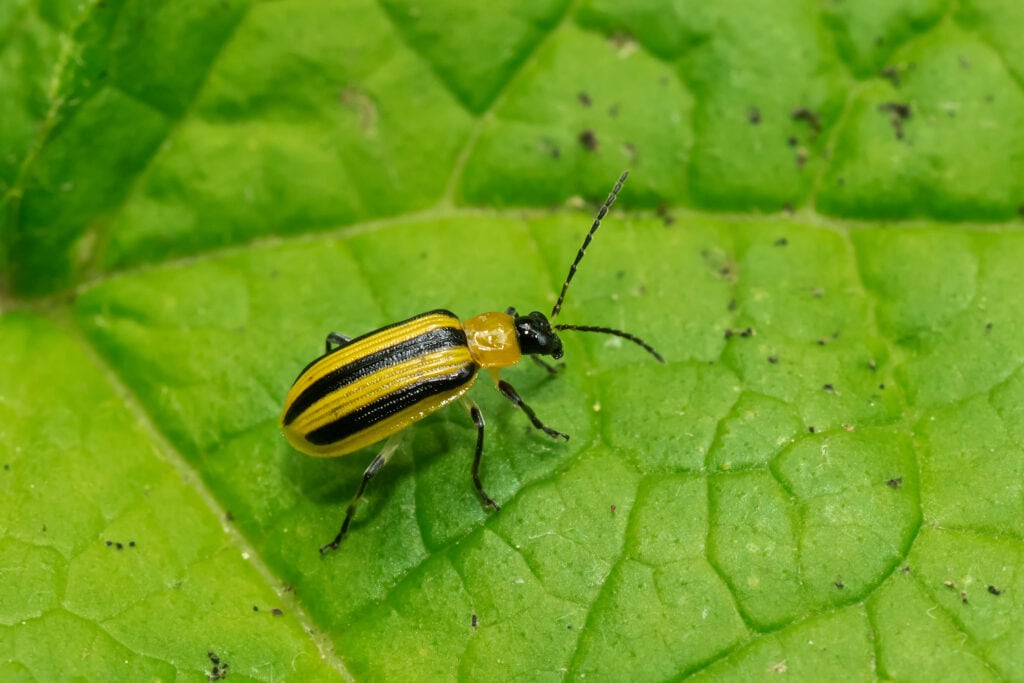 One of the most common and destructive pests of cucumbers is the spotted cucumber beetle (diabrotica undecimpunctata) These beetles are about 1/4 inch long and are yellow with 12 black spots. They are also known as the Southern Corn Rootworms. 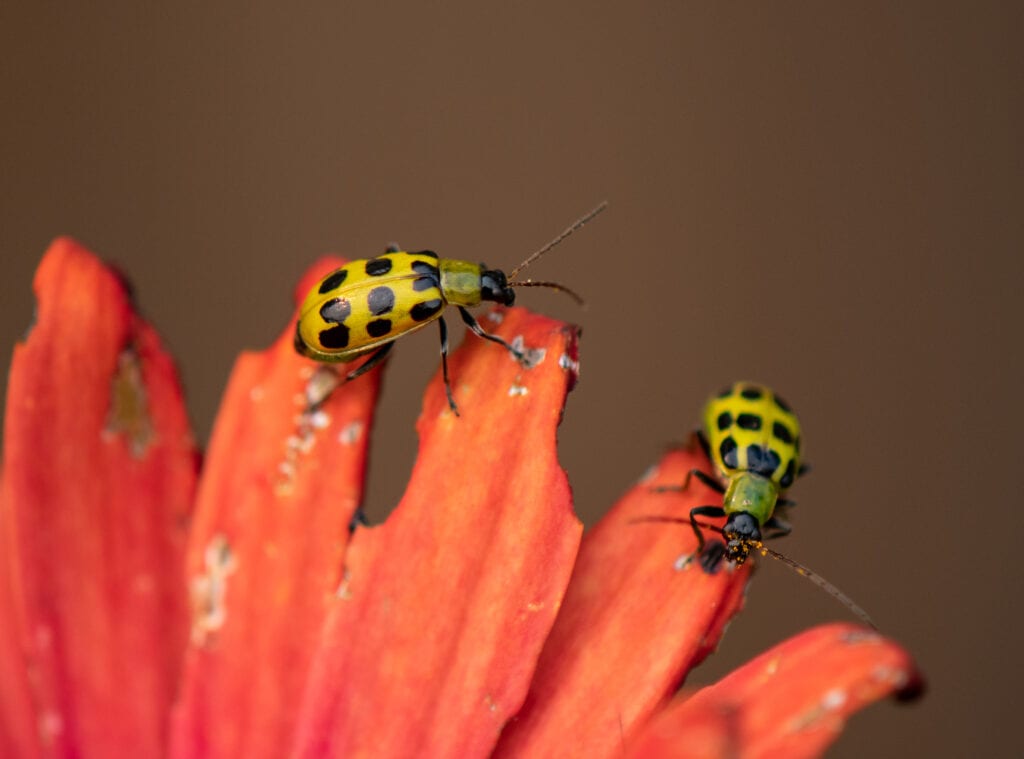 Mostly prone to warmer climates, Banded Cucumber Beetles (diabrotica balteata) are most prominent in parts of Florida, Arizona, and Texas. Adults are green with four broken yellow bands and have orange heads with copperish-colored antennas. 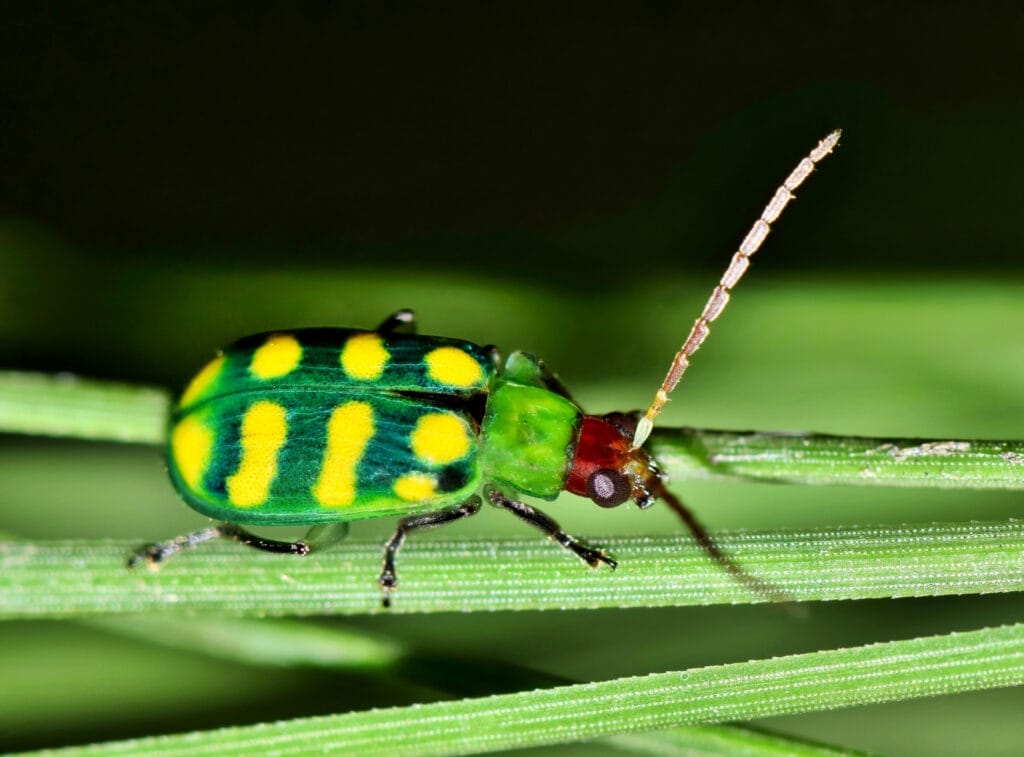 What’s the Difference Between Stripped and Spotted Cucumber Beetles?

The larvae of striped cucumber beetles eat the roots of the plants where they lay their eggs at the base of cucurbit plants.

The spotted cucumber beetle is very different. It lays its eggs on corn and other grasses, so its larvae don’t damage cucurbit crops. The larvae spend several weeks eating on root tissue once the eggs hatch.

So, you might not be able to tell that the larvae have done damage just by looking at the plant’s leaves unless you try to pull up a plant and find that the roots have been eaten. Then, for about a week, larvae pupate in the soil before becoming adult beetles.

Life Cycle of a Cucumber Beetle

Adult beetles overwinter in plant debris and garden trash. Adults mate and lay eggs in the soil at the foot of host plants after feeding on the blooms of flowering plants.

Females leave their winter sites in early spring and deposit up to 800 orange-yellow eggs in the soil near the base of plants. In about ten days, hatching occurs, and the larvae feed for three or more weeks before pupating.

Cucumber beetles become active in late May or early June and grow to adults in mid-July to September.

The damage caused by cucumber beetles is not limited to just the damage it causes to your crops.

Unfortunately, since these beetles enjoy feeding on watermelon, cucumbers, squash, and pumpkins, they often transmit the squash mosaic virus or cucumber mosaic virus, which significantly damages plants and reduces yields.

This virus can quickly infect an entire garden, transmitting bacterial wilt and mosaic virus, so it is important to take steps to prevent its spread.

How to Get Rid of Cucumber Beetles Effectively

These beetles feed on the leaves of plants, leaving behind small holes. The feeding can also create lesions that can lead to infection and death of the plant. Infestations of cucumber beetle damage can be vast, so it is important to monitor your plants for signs of these pests and take steps to control them if necessary.

First things first, the easiest way to not have any cucumber beetles in the first place is to select resistant varieties whenever possible while planting. This will reduce the risk of any future infestations.

Another thing to remember is to inspect plants frequently for beetles and handpick any that are discovered. Also, remove garden trash and other debris shortly after harvest to reduce overwintering sites.

Floating row covers are extremely effective when placed on seedlings and left in place until plants are old enough to tolerate beetle damage.

Securely fasten row cover edges to ensure that beetles do not find a place of entry, and remember to remove row covers in early spring to allow for pollination.

Commercially available beneficial insects, such as ladybugs, green lacewing, and the spined soldier bug, will feed on pest eggs.

Beneficial nematodes work well to curtail immature stages developing in the soil, in fact, one of the most common biological controls for cucumber beetles is the use of parasitic nematodes.

One way to help manage these pests is to use trap crops. Trap crops are plants that are planted near susceptible crops to attract cucumber beetles away from your primary crop.

Another way to help protect your plants from cucumber beetles is to use aluminum-plastic mulch.

Mulching, using fabric, hay, straw, or plastic, will help keep the soil cool and moist, which will make it less attractive to the beetles. It will discourage the beetles from laying eggs.

Straw mulch may attract wolf spiders, which are natural predators of cucumber beetles.

If pest levels become intolerable, spot treat with a fast-acting organic insecticide. For best results, apply to the undersides of leaves and deep into the plant canopy where insects hide.

Spinosad, the active ingredient in Monterey Garden Insect Spray, is approved for organic use and works on a long list of insects found on vegetable crops.