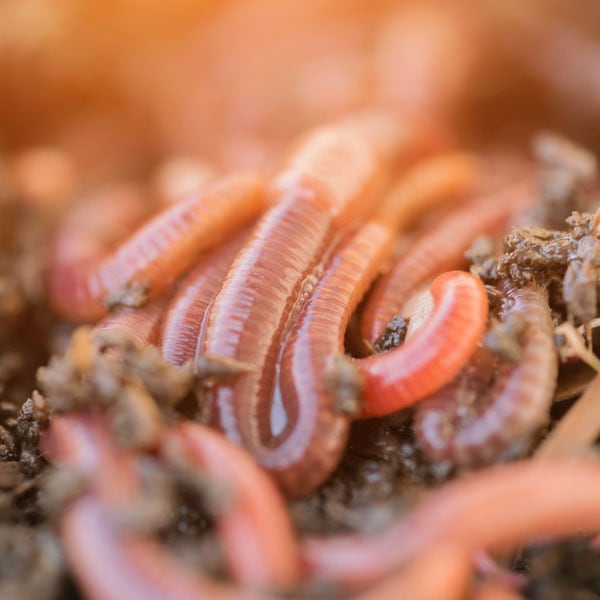 All the Compost Creatures: Levels 1, 2 and 3

The number of creatures in a handful of organic compost can be astonishing. Think in terms of billions. Ants, nematodes, mites, spiders, beetles, worms, fungi, actinomycetes and bacteria all participate in breaking down organic matter.

Many of us in the West have been brought up to whip out anti-bacterial sprays at the whisper of the word bacteria. Fungus scares us as well. Yet it is these despised organisms that perform the indispensable service of breaking organic material down into components plants can use. A pile of sterilized table scraps, lawn clippings, and garden refuse piled into a sterile container and dampened with sterile water would not compost because it would contain none of the microorganisms that do the work.

Specifically formulated for fast, complete composting, Ringer® Compost Plus contains a proprietary blend of microorganisms which break down yard waste as well as a nutrient energy source for a fast start.

Bacteria are one-celled organisms that lack nuclei, though some, surprisingly, can move of their own volition. They do most of the work of breaking down organic material, but they do not work easily on the tough, fibrous material that makes up cell walls — cellulose, lignin, and hemicelluloses.

Strictly speaking, actinomycetes are bacteria, but they look nothing like the roughly circular blob that most people think of when they picture a bacterium. Instead, they resemble fungi so closely in physical structure that they used to be considered members of that kingdom. Their name, actinomycetes, records that resemblance in evoking the fungal mycelia, the mass of thin, fibrous threads or hyphae that form the vegetative part of a fungus (as opposed to spores, for instance, which are reproductive, or mushrooms, which are fruiting bodies). An attempt has been made to replace the misleading name actinomycete with the more accurate actinobacteria, but the old name remains alive and well, both in the popular and the scientific literature.

Like fungi, many actinomycetes have long, slender, branching hyphae; like fungi, they produce spores (most bacteria reproduce by cell division); and like fungi, they help to break down the complex, woody organic molecules such as cellulite, lignin and chitin that form cell walls. It is the remnants of these materials that form humus, the organic material that lasts for thousands of years.

Actinomycetes are amongst the rare group of bacteria that can fix atmospheric nitrogen in soil. Like the Rhizobium bacteria that colonize legume roots, actinomycetes form root nodules with a number of different plants (more are discovered each year), trading nitrogen for energy in the form of carbon.

The largest genus of actinomycetes, the Streptomyces, have given rise not only to streptomycin, the first successful treatment for tuberculosis, but to over fifty other antibiotics. In fact, over two thirds of the antibiotics we use today were derived from one of the 500 species of Streptomyce. In the soil, these antibiotics protect plants from numerous soil-borne diseases.

While a few actinomycetes can grow in anaerobic conditions, most are aerobic which means that they can be found only in aerobic composts, not anaerobic ones. It is actinomycetes that give earth (and compost) their characteristic earthy smell.

This category includes molds, mildew, yeasts, rust and mushrooms. Mushrooms are actually a part, rather than a type, of fungus; they are the fungal version of a fruit. What’s referred to as the vegetable part of the fungus is the white web that can be seen sometimes in compost itself and often in the layer of needles under a pine or spruce tree. This is the mycelium, the tangle of filaments that looks like a spider web gone wild.

Fungi are responsible for the white, web-like structure found in the cooler parts, or cooler phases, of composting. It is important that compost be undisturbed long enough for these webs to form. Turning compost every day constantly breaks up these webs, keeping fungi from doing their work.

A vast array of insects, arthropods, beetles, snails, slugs and worms inhabit cool compost piles. Most of these creatures cannot tolerate the high temperatures of a hot pile. As the pile heats up, they retreat to its edges or downwards into the soil beneath. As it cools, they move back in and start performing their functions.

Many of these creatures are not primary consumers, like the various bacteria, fungi and actinomycetes. Instead, they feed on those creatures or on each other. Where micro-organisms transform composting material chemically, many macro-organisms are physical decomposers, grinding organic material into smaller pieces, which then makes the work of the micro-organisms easier.

Mites, millipedes, springtails, flies, spiders, ants, snails, slugs and various beetles are amongst those that can be found in compost piles. Only a few are described in any detail here.

The word nematode can raise gardeners’ blood-pressure in an instant. For many it means the devastating root-knot nematode.

In fact, there are perhaps 80,000 kinds of nematodes, the vast majority of which have no particular agricultural significance and some of which are extremely important in controlling other pests. Beneficial nematodes eat the larval stage of gnats, for example. Those larvae feed on roots, damaging houseplants even before the winged adults emerge to irritate house holders.

According to the Cornell composting site, nematodes are the “most abundant” of physical decomposers; several million may inhabit a handful of compost.

Though not the most numerous, worms are amongst the largest macro-organisms in compost and they do more composting work than any of the other macro-organisms.

Earthworms are not world travelers but they do move vertically through soil, sometimes to depths of two meters. See Penn State’s “Common Earthworm Facts.”

In doing so, they mix soils from different levels, bringing soil nutrients up from depths most plant roots cannot reach, and extend the depth of the topsoil by depositing castings both on the surface and below the topsoil, thus enriching subsoils with organic matter. Their tunnels aerate soil and provide pathways for roots through dense, compacted soils. In fact, according to the University of Florida Extension Service, “sometimes earthworm channels are the only way for roots to reach lower horizons in soils with compacted layers.”

The Can O Worms provides a quick, odorless and space efficient way to convert kitchen scraps into rich, crumbly vermicompost. Contains 3 large capacity working trays — no need to purchase additional trays! Includes a coco-brick, to be used as starter bedding, and a handy “how-to” booklet. Roughly 1,000 Red Wigglers are all you need to get started.

Some worms eat the soil itself, or the organic matter in it. The common earthworm usually eats organic refuse on top of the soil, often carrying bits into its burrow to consume there later.

Worm castings are rich with nutrients and with enzymes that help to break down yet more compounds into nutrients for plants. These chemicals might leach away in rainstorms except that the castings are encased in a mucus that makes them less water soluble. That mucus, like the mucus produced by much smaller organisms, helps soil particles to aggregate, improving soil structure and thus both water retention and water drainage.

Along with ticks, mites belong to Arachnida, the wingless, usually eight-legged family that also includes scorpions and spiders. Mites have diverse shapes, sizes, diets and means of locomotion. They range from microscopic to barely visible, and from globular to formidable in appearance.

Some mites eat decaying organic matter, some eat fungi, some eat nematodes, insect larvae, eggs and springtails. Some species are parasites. When one grabs onto a larger organism, it is looking for a thin skin and a good meal. When another does so, it is looking for a ride. Millipedes, beetles and sowbugs have been the unwitting steeds for mites in search of a better patch of compost.