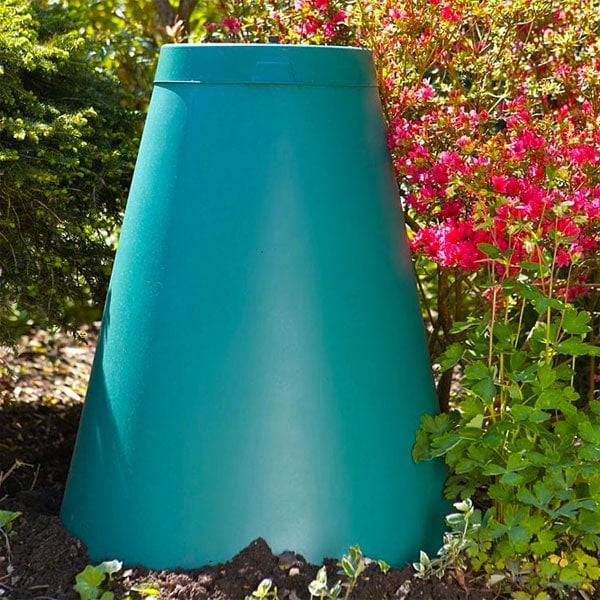 Unlike traditional bins, the Green Cone Solar Compost Digester takes ALL cooked and uncooked table scraps — including meat, bones, fish and dairy products — and reduces them into water, CO2 and a small amount of residue.

The Green Cone is not a composting system at all since it is designed not to produce compost but to provide a convenient, environmental way to dispose of kitchen waste. It’s a “solar food waste digester” and that’s the first source of confusion associated with this item.

Second, there’s the matter of its appearance. It looks like an anaerobic composter and it’s constructed like one. It consists of a completely enclosed bin that sits 28 in. above the ground with a partially open bottom underground. Like anaerobic composters, the Green Cone System can be fed any food waste — vegetable scraps, fish, meats, bones and dairy products — except the greasiest and highest-fat items: left-over salad dressing, old mayonnaise, rancid butter and so on.

There is one significant difference between a solar food waste digester and anaerobic composting systems: it’s aerobic! In order to make sense of this, it’s necessary to look at the cone’s construction.

The Green Cone consists of a double-walled upper cone attached to a deep basket below. It’s installed by burying underground the basket and the top inch (3 cm.) of the cone. This should be done in a sunny, well-drained location. Food dropped into the basket breaks down into primarily water and carbon dioxide. Residue builds up so slowly that the basket does not need to be emptied more than once a year.

The translucent green wall of the Cone is lined with a second, opaque black cone. Less than an inch of space separates the two. This arrangement allows the air between them to heat up efficiently. Since the black cone is open at top and bottom, the hot air can flow into the main compartment, heating it and the contents of the basket. As a result, temperatures inside a Green Cone will be significantly higher than those in a home-made anaerobic composter with only a single wall. The double walls, which trap heat by day, also insulate the cone against heat loss at night.

This basket, or digestion chamber, is much more open than the bottoms of most anaerobic digesters. Two thirds of the material in the open part of the basket has been cut away. Ideally, all the feedstock is in the basket, so all of it is exposed to the air and the organisms in the soil around it. In an anaerobic digester, most of the feedstock is in the pile above the source of oxygen, which is at the bottom of the vessel. Though the cone appears so similar to other digesters, it is different in crucial ways.

A solar food waste digester can cope with the same wide range of kitchen scraps that can go into an anaerobic digester. There are no disagreements about whether the system can process meats safely: the answer is yes. The instructions warn that no more than 50% of the contents should be meat. After all the warnings about not composting meat at all, this seems quite liberal. However, yard waste, even grass cuttings, should not go into the cone.