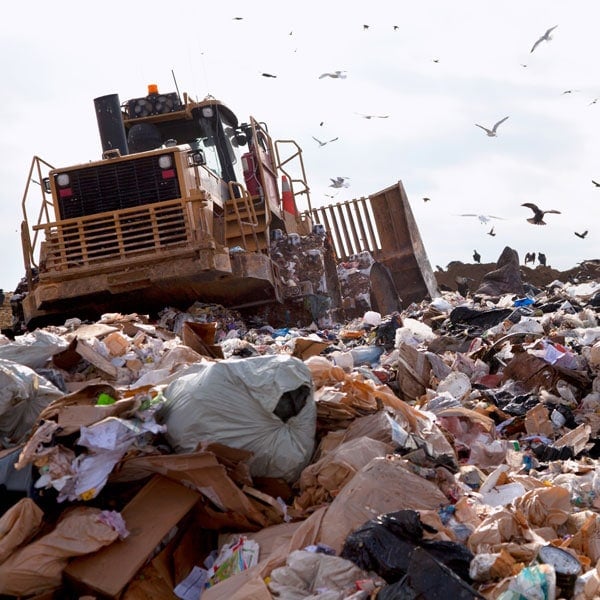 Yard and food waste make up over a quarter of all the garbage going into American landfills. Composting will change that. 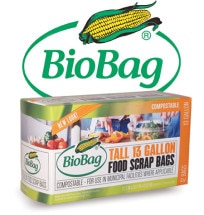 Perfect for collecting food waste, paper and other household items.

In most of the world, including North America, we do one of two things with our ordinary garbage: burn it or bury it. Neither one is good for us or for the environment. Burning garbage in incinerators releases dangerous gases and dust (particulate matter) which contribute to global warming and pollute lakes, forests, oceans and cities half a world away from where they originated. Most incinerators in industrialized countries now remove large quantities of particles and pollutants, thus ensuring cleaner air. But the bulk of what they remove ends up in a landfill.

Burying garbage also causes both air and water pollution, and simply transporting it to the sites consumes an increasing amount of valuable fossil fuels, which produces more pollution and other problems.

Buried in a landfill, the typical plastic trash bag takes 1,000 years to degrade, giving off toxins as it does. These biodegradable bags — available in various sizes — decompose quickly and safely with their contents.

Is Your Landfill Full? Space Issues

It might seem that yard waste and food scraps must be amongst the more benign things you could send to your local landfill. These things are not toxic; how could they contribute to pollution? As for space, how much can these things take up? Besides, unlike an old toaster they decompose, which means that they take up less space next year than they do when they’re thrown away.

All of this sounds perfectly reasonable. Unfortunately, much of it is either wrong or misleading.

Across most of North America, yard and food waste make up over a quarter of all the ordinary garbage we throw away. That’s 25% by weight. In the U.S., that 25% is almost equally divided between yard waste (32.6 million tons, or 12.8% of all MSW) and food scraps (31.7 million tons, or 12.5%). And then there’s all the other organic stuff that could be composted: all the clothing, towels, and bedding made of organic fibers, plus wood, old furniture and sawdust. Then there’s paper, which at 83 million tons accounts for another 30% of municipal solid waste. As of 2006, the latest year for which figures are available, over 64% of the yard waste we throw away was recovered and composted, as was 54.5% of the paper and cardboard. Only 2.6% of food waste reached a compost heap.

In other words, well over fifty percent of our ordinary garbage could be composted, but most of it isn’t.

This ordinary garbage, or Municipal Solid Waste (MSW), is household and business trash as opposed to chemical or industrial waste. It’s the stuff most of us put in our trashcans at home, at school, or at work, to be picked up and hauled away: paper, packaging, food scraps, old toys, old chairs, old microwaves, lamp shades, blue-jeans and books. It includes trash from offices and restaurants. In the majority of cases across North America, it ends up in a landfill. This is in spite of the fact that 24 states, at least one province, and hundreds of municipalities now ban yard waste from landfills.

Landfills also accept certain types of commercial and even industrial waste which is one reason why the mix in them can become so toxic.

So, how are we in the United States doing compared to other countries? Not so well. The Organization for Economic Co-Operation and Development, which includes just about every industrialized nation on earth, tracks key environmental indicators for its 30 member countries, including generation and disposal of municipal solid waste. Compared to other industrialized nations, the U.S. fares poorly and Canada even worse. In 2005, Canada came dead last in a list of seventeen “peer countries” in terms of kilograms of MSW generated per person, as reported by the Conference Board of Canada. The United States came in fifteenth. 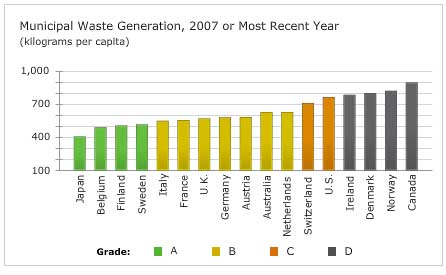 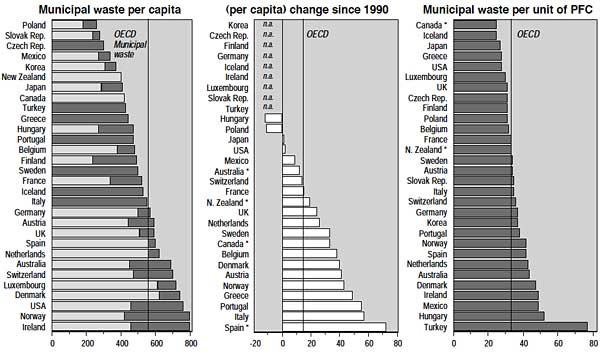 New York City and Long Island have not had any garbage barge crises recently, but they have hardly solved their garbage problems. As of 2007, New York City was exporting its garbage to five other states: New Jersey, Ohio, Pennsylvania, Virginia and South Carolina.

Be part of the solution – not the pollution! The All Seasons® Bokashi Bucket is an efficient indoor composting bin that uses beneficial bacteria to ferment table scraps into a nutrient-rich soil enhancer in just 2-4 weeks. Works without unpleasant odors or attracting flies and can be stored neatly under the kitchen sink for easy access.

Of course, that’s not the end of the story. A fair amount of New York City’s garbage also goes to landfills in northern parts of its home state, most of it by truck. Since most major roads in New York State are toll roads, drivers prefer back roads which pass through numerous small towns. Residents have not been happy with this procession of garbage trucks rumbling by in the wee hours. In May of 2008, the governor banned NYC garbage trucks from these small byways, a decision that distressed the drivers and the companies they work for. (“Truckers upset as New York governor bans trash haulers from back roads.”)

The Big Apple is not alone in its struggles to find dumping spots for its garbage. The sad tale of Toronto (see the box below) illustrates the many complications and permutations that attend garbage disposal in the modern age.

The bottom line is this: establishing a landfill is an enormous and enormously expensive undertaking. It is harder and harder just to find a suitable site for a new one, especially near a major city. Reducing the amount of trash that reaches landfills and incinerators has become an urgent matter in many areas across North America. Hence the ban on yard waste, one of the easiest things to divert. We need to compost more and throw away less.

Is Your Landfill Leaking? Pollution Issues

The environmental impact of landfills is a complicated issue. As pointed out above, composting household and garden waste helps prevent landfills from becoming overfilled which lessens the danger that they will leak into water tables or waterways. It also saves the gas or other fuel that would be used to transport those wastes and prevents that much carbon dioxide, methane, nitrous oxide and particulate matter from entering our atmosphere. This is not a minor concern; large cities must sometimes truck garbage hundreds of miles. (See the section above for the painful details.)

Space is not the only issue. Municipal landfills can pollute air, water and soil. And yard and table waste actually contribute significantly to all of these pollution problems. Why? First, because they are wet. Secondly, because they are organic.

Wet garbage, including yard waste which is 50 to 70 % water, adds to the toxic stew of chemicals — household cleaners, antiperspirants, nail polish, paint and so on — that mix in a landfill. In old, unlined landfills, this leachate, diluted and made more mobile by rainwater, percolated down to the bottom of the fill. There, it would sink into the soil, spreading downwards and outwards in a characteristic brush-stroke shape known as a plume, contaminating soil and water as it moved. (See the Washington State U. Extension publication called “Fertilizing with Yard Trimmings” – PDF, pp.2-3.)

Closing a landfill or capping it with cement does not stop its plume from advancing. Modern, sanitary landfills are usually lined to prevent such pollution and the leachate is drawn off and treated. However, it is naive to assume that a liner will never fail. In 1987, the EPA estimated that eventually any liner would leak (US EPA Federal Register, Aug 30, 1988, Vol.53, No.168). In 2000, a joint Canada/U.S. group working to monitor and reduce PCBs in the Great Lakes wrote that &quot;landfill liners are temporary and chlorinated benzene in PCBs can cause leaks in certain liners.&quot; That it would not do so immediately isn’t reassuring. The longer a landfill is capped and abandoned, the less likely it is to be adequately monitored and a leak detected.

Air pollution may seem an unlikely consequence of landfills, but in fact it is a major problem. The primary culprit is anything organic such as yard and food waste.

Waste at landfills is usually compressed to save space. Each day’s deposit is covered with a layer of dirt to discourage insects and rodents and to help shed rain and thus minimize leachate. So far, so good. But the result is an almost oxygen-free environment. When organic materials decompose in such anaerobic conditions they produce methane, a greenhouse gas.

Since composting produces carbon dioxide, another greenhouse gas, it’s reasonable to suspect that the compost/landfill choice is a classic six-of-one, half-dozen-of-the-other situation. The first produces carbon dioxide, the second produces methane. What’s the difference between them? Is it really worth the time and effort to keep organics out of landfills?

The Can O Worms provides a quick, odorless and space efficient way to convert kitchen scraps into rich, crumbly vermicompost. Contains 3 large capacity working trays — no need to purchase additional trays! Includes a coco-brick, to be used as starter bedding, and a handy “how-to” booklet. Roughly 1,000 Red Wigglers are all you need to get started.

It does matter where the stuff degrades and how. CO2 is a major pollutant and a major problem. But methane is worse. According to the EPA, methane “remains in the atmosphere for 9-15 years” and “is over 20 times more effective in trapping heat in the atmosphere than carbon dioxide (CO2) over a 100-year period.” Methane is twenty times more potent than carbon dioxide.

As recently as 2003, the highest producer of methane was landfills (EPA). They’re still one of the top three sources, the others being cows burps, or enteric fermentation, and leakage from the production of natural gas. Landfills have dipped to second place, largely because an increasing number of them have systems in place to collect the methane, which is either burned off or used to produce electrical power.

In 2006, the EPA reports that US landfills emitted almost 6 teragrams of methane, equal to over six and a half million U.S. tons. This is equivalent to about 125.7 teragrams of CO2 in its effect on global warming or 138,560,531 tons.

Flaring methane — burning it as it is collected from the landfill — may seem both wasteful and horribly polluting. And it is. But if you bear in mind that methane is so much more dangerous to the environment than carbon dioxide, then the practice that converts CH4 to CO2 appears in a different light.

When do landfills stop producing methane? No one really knows. A number of sources now suggest that landfills continue to produce methane in dangerous amounts well past the point at which it is economical to collect it and long after the 30 year period that the EPA requires closed landfills be monitored.

Burning off the methane at landfills produces CO2, still a greenhouse gas, but not as bad as methane. In terms of making a long-term dent in global warming – quickly – landfill improvements offer one of the best opportunities around. 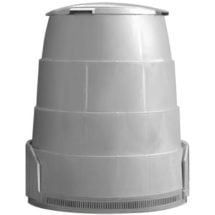 Manufactured in Sweden, the Green Johanna is the Rolls Royce of backyard gear. 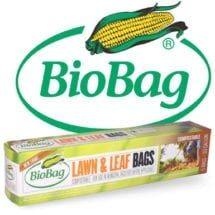 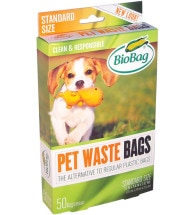 100% compostable! Made from GMO-free corn -- NOT petroleum-based plastic.