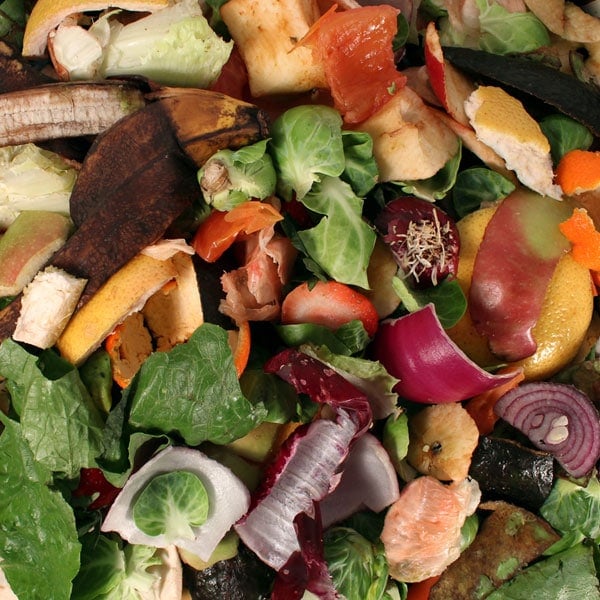 Bokashi composting is an anaerobic process that relies on inoculated bran to ferment kitchen waste, including meat and dairy, into a safe soil builder and nutrient-rich tea for your plants.

In Bokashi composting, kitchen scraps of all kinds — including meat and dairy products banned from aerobic systems — are mixed with some of the inoculated bran, pressed into the Bokashi bucket, covered with another handful of bran, and tightly covered. When the bucket is full, it is sealed shut and set aside for ten to twelve days. Every other day during that time, the leachate that is an inevitable byproduct of anaerobic composting needs to be drawn off. That’s the only care required. (This is very easy with a commercial Bokashi Bucket which has a spigot for this purpose.) When the bucket is opened, the contents, though recognizable, are thoroughly pickled. At this stage, the “pre-compost” as one company brochure terms it can be buried in a fallow spot in the garden. One Caution: It is still so acidic that plant roots should not come in contact with it for two to four weeks.

This brief overview of the process does little to explain how it works. It may help to back up at this point.

Efficient and easy to use! The composting bins and supplies available at Planet Natural will reward you with piles of rich organic matter to use in your yard, garden, or houseplants.

According to Wikipedia, the term Bokashi is a Japanese word that means “fermented organic matter.” Whether it does or not, that’s what it has come to mean in North America and Britain. The Bokashi host medium can indeed be almost any fine organic grain or grass-like substance — bran, rice, wheat mill run (WMR, a waste product from flour milling), used mushroom growth medium, dried leaves, even sawdust.

This medium is inoculated with beneficial microbes that flourish in anaerobic, acidic environments but smell less foul than do those in unfettered, natural anaerobic conditions. To prepare the inoculant, a brew that will attract the appropriate bacterial strains is prepared, the host material is immersed in it, and the microbes are allowed to ferment. Molasses provides an energy source for the microbes which reproduce wildly for several days. Once the fermentation stage is over, the inoculated host can be dried, packaged, and stored for long periods. Though this is a simplified version of a process that requires several steps, it does describe what we buy when we buy Bokashi.

The bacteria belong primarily to three strains: yeasts, (Saccharomyces spp.), bacteria that produce lactic acids (Lactobacillus spp.), and (phototrophic) purple non-sulfur bacteria (Rhodopseudomonas spp.). These, or bacteria like them, are the active organisms in yogurt and in silage, the fermented hay that is produced all over the world as a livestock feed. All smell sour or fermented but none produce a smell nearly as foul as those associated with natural anaerobic processes.

Bacteria of the types found in commercial Bokashi are all around us. Several on-line sites, including at least one on YouTube, tell how to start and culture a batch of inoculant from scratch, eliminating the need to buy commercial Bokashi inoculant. There’s more about this fairly involved process below.

Where Did Bokashi Come From?

Most Bokashi sites state that the inoculant (usually called EM or Effective Micro-organisms) was discovered or developed by Dr. Teuro Higa, a professor at University of Ryukyus, Okinawa, Japan, around 1982 or so. An article by two Hawaiian horticulturists, “How to Cultivate Indigenous Organisms (PDF),” available through the University of Hawaii extension, describes how to find and cultivate the sorts of micro-organisms used in EM — in other words, how to create one’s own Bokashi inoculant.

According to the authors of that document, Hoon Park and Michael W. DuPonte,

In Asian countries, including Korea, deliberate collection and culturing of naturally occurring soil microorganisms has been a common agricultural practice for centuries, and application of these cultures to crop soils is believed to minimize the need for applications of inorganic soil amendments.

The process they describe was one common on Korean farms.

This suggests that Higa’s contribution may have been the isolation and culturing of particular strains of bacteria rather than the entire process itself. The literature produced by Bokashi companies is rather vague on this point.

Despite its roots in traditional practices, here in the west Bokashi is the new kid on the home composting block. To a large extent it has yet to prove itself. While there’s a huge body of independent scientific work establishing the many virtues of both regular compost and of vermicompost, no such body of work yet exists for Bokashi. To a large extent, its virtues are still being touted by the people who developed it in the eighties and who are marketing it today. Most of the studies cited by these companies, especially by the U.S. company with close ties to Higa, appear to have been presented exclusively at the conferences his group sponsored and to have been published exclusively on his websites.

However, there have been several articles in the popular press and numerous testimonials in composting blogs.

How to Use Bokashi?

While the most common use for Bokashi is as an inoculant in anaerobic composting, it can also be added to an aerobic compost pile, added directly to soil, or used to create compost tea for watering plants.

Bokashi is probably one of the least expensive composting systems around. A commercial Bokashi Bucket consists of a five-pound plastic bin with a tight-fitting lid on top and a spigot near the bottom. This may seem a bit steep at almost fifty dollars, but that spigot might be the difference between a process that’s easy and one that’s unmanageable. The leachate needs to be poured off and lifting a five-pound bucket full of soggy kitchen waste and its run-off is beyond many. A kitchen baster might be useful for this otherwise messy process. 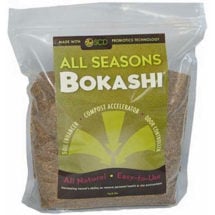 The only other equipment required is the Inoculated Bokashi Bran; a bag of it usually comes with the initial purchase and 2 pound replacements cost about fifteen dollars each.

The process itself is about as simple as it gets. Perhaps once a day you mix your kitchen waste (including meats and dairy products!) with a handful or so of Bokashi (basically enough to coat it lightly) then press them it into the bin, sprinkle another handful of bran over them, and close the lid. (A plate or a layer of plastic over the pile helps seal it against the little air left in the bucket.) Large bones will not, of course, disappear over the course of ten days. The directions recommend cutting up small bones and even chopping other items into small pieces for maximum efficiency. If one chose to skip the chopping step, a few extra days’ fermentation time would probably reduce the larger pieces to thoroughly fermented mush.

When the bin is full, cover it tightly and set it aside somewhere in the house where it’s out of direct sunlight for ten days or so. Every other day, draw off the liquid, which can apparently be used as a fertilizer (in a very diluted form) or full strength to control slime in drains, pipes and septic systems.

After ten to fourteen days, the waste in the tub should be thoroughly pickled. It can then be dug into a fallow patch of the garden.

Bokashi is an anaerobic process. It needs to be kept as free from oxygen as possible. It’s important, therefore, to compress each day’s waste flat into the container so as to eliminate any air pockets and to avoid stirring up the previous day’s waste when putting in new garbage. One site recommends using a plate to press the food-stuffs flat in the composter. Leaving the plate in place protects the surface of the compost from any air in the composter.

Drawing off liquid regularly helps maintain the environment needed by the bacteria that break down the organic materials. That liquid needs to be used within a day or so.

As usual, foul smells indicate that something has gone awry. This diagnosis is a bit trickier than usual because Bokashi does not smell like spring roses even at the best of times. The literature talks about the difference between a “sweet and sour odor,” indicating fermentation, and a “foul odor,” indicating decay.

Bokashi should not smell like other sorts of anaerobic decay because the inoculating microbes — yeasts, producers of lactic acids, and others — do not produce the sulfuric acid that gives outdoor anaerobic piles their characteristic stench.

If decay does occur, it can sometimes be reversed by adding more Bokashi. If this doesn’t work, it’s time to dump that batch, scrub the bucket, and start again.

The statement that the Bokashi mixture can be dug into the garden after fermenting for ten days shouldn’t be confused with the statement that the mixture is done. The on-line description of the bin refers to what’s produced in two weeks as “pre-compost” and warns that plant roots should not touch it directly for a week or two; only after a month is it fully incorporated into soil. (Like the anaerobic compost produced by digesters, Bokashi pre-compost is quite acidic when it first emerges from its bin.)

Some people feed pickled Bokashi material to their vermicomposting worms, apparently with no problems. Given how acidic the Bokashi process (and product!) are, and how sensitive worms can be to acidic environments, it may seem surprising that the worms do not react to fermented feedstock, but apparently it’s not a problem.

Others put Bokashi pre-compost into their regular composting pile. In gardens, one must remember not to plant anything where the Bokashi was buried for at least two weeks. Burying it in the compost pile eliminates this need. It also solves the problem of finding fallow space in small gardens. While it might seem pointless to use the Bokashi method if you’re just going to throw the stuff on the compost heap anyway, this objection misses an important point: while the material that goes into a Bokashi bin would take months to compost in an outdoor pile, the pre-compost breaks down completely in about a month.

The acidic nature of Bokashi means that one should keep an eye on the pH of the pile, especially if one is adding Bokashi frequently.

For the independent souls who prefer to do it themselves, several on-line sources are available. First, there’s the PDF article mentioned above, “How to Cultivate Indigenous Organisms,” by Hoon Park and Michael W. DuPonte. A blog called Paper Bokashi details another method, an in-home process for collecting and brewing the micro-organisms needed for Bokashi composting and for inoculating newspaper with them.

The traditional process requires burying boxes of rice and monitoring fermenting liquids with a thermometer. The recommended host — wheat mill run — is not something that everyone keeps at the back of the pantry.

Just about everyone has old newspapers, however, and these are the host recommended by the blog. Indeed, that version is much simpler all around, requiring no special tools whatsoever and working only with liquids until the newspapers are introduced. The entire operation can be carried out in the kitchen. So while the traditional process can claim romance, the blog describes a process remarkable for its simplicity.

Neither process can be carried out in an afternoon. Any process that gathers, cultivates, brews and inoculates indigenous organisms is a multi-step process requiring long waits between each step.

As an example, here’s a summary of the procedure described by Bokashi Composting:

At this point you’re ready to set up a Bokashi bucket. Nothing about this process is difficult; none of the steps take much time. Even with all the waiting for the various fermentation stages, the entire process takes on the order of five weeks.