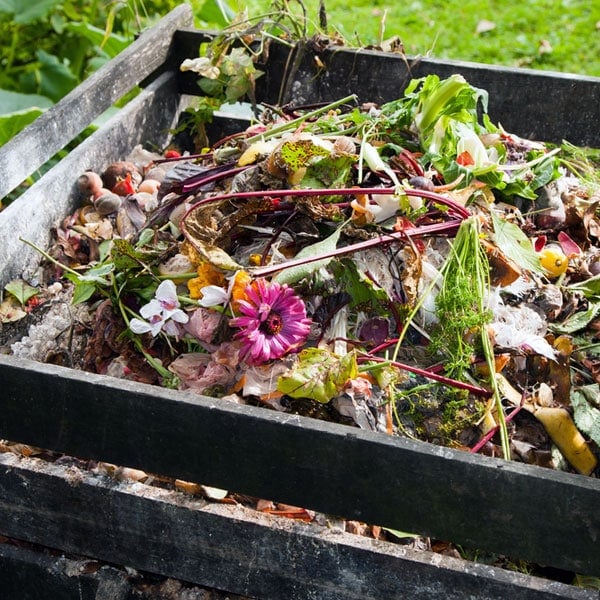 The soil-building, nutrient-delivering, environmentally positive practice of composting benefits our plants and our planet. Here’s how.

How is it possible for one substance, compost, to have all of the benefits it’s credited with having? On the one hand it boosts plant health, improves soil structure, and contains microbes that produce antibiotics. On the other hand, it promotes chemical activity in the soil that converts nutrients to plant-friendly forms, keeps them from leaching out of the soil, and nourishes fungi that ferry nutrients from deep in the earth to plant roots. On the third hand (and already we’re in trouble here), composting prevents both air and water pollution, while compost itself breaks down some toxic chemicals, immobilize others, and removes still others from polluted soil. On the fourth hand, it performs two pairs of seemingly impossible feats: it raises pH in acidic soils and lowers it in alkaline soils, and it improves water retention in sandy soils and drainage in clay soils. How, how is all of this possible?

Want to skip the lesson and get started right now? Planet Natural has the best ​composting supplies available​ to give your garden every possible advantage.

The answer lies in compost’s complexity, which makes it marvelously adaptable. It contains so many elements and compounds, in so many combinations, and it supports such a rich, diverse, panoply of organisms, both micro- and macro-, that there’s always something there to meet the need of the moment: to make nutrients available to plants, to chemically degrade a dangerous pollutant, to expand like a sponge in sandy soils, or to pull together little clumps of clay colloids so that there’s room for water to trickle down between them.

Beyond that single overarching attribute, three secondary attributes — one chemical, one biological, and one physical — explain most of compost’s effects.

First, the chemical attribute: Compost provides an extraordinary number of attachment points for charged particles — places where other molecules and compounds can latch on. This explains its ability to both lower and raise pH (“balancing” it) as well as its ability to shield soil from sudden changes in pH (the “buffering” effect.) It also explains why compost can help bind nutrients (by providing places to which the nutrients can chemically attach) and that, in turn, explains how it can prevent water pollution: by preventing nutrients from leaching or being washed out of the soil and into ground or surface water.

This same attribute explains how compost can “bind” some toxins in the soil, thus preventing them from being taken up by crops, which might otherwise become too poisonous to eat.

Second, the biological attribute: Compost itself contains vast quantities of organisms, and it also provides the foodstuff that nourishes those already in the soil. The larger organisms — beetles, worms, earwigs, centipedes — help aerate and mix dirt as they move through it, and of course worms, which feed on organic matter, produce the very highest quality compost through their castings.

Trouble in the pile? Ringer® Compost Maker contains a proprietary blend of microorganisms which break down yard waste as well as a nutrient energy source for a fast start. Specifically formulated to speed up the natural decomposition process for fast, complete composting. Recharges cool piles, too!

The sheer variety of micro-organisms means that there’s almost always something in there that can “eat” — and in the process, degrade, or break down — almost anything, including various toxic chemicals. Some soil bacteria produce antibiotics (many of our antibiotics originally came from soil) so it is in fact not so surprising that they help protect plants against various soil-borne diseases. Many of these micro-organisms help convert nutrients into forms plants can absorb.

Finally, the physical attribute: Compost improves soil structure. In brief, this means that it helps form aggregates, or little clumps of matter, in soil. This extremely simple fact has huge ramifications. When molecules move together to form aggregates, spaces open up between them, so the soil gains loft and porosity. Aggregates rich in organic matter are extraordinarily absorbent, so in sandy soils improving structure helps retain water. In clay soils, the pores that open between aggregates allow air, water, earthworms, and roots to move freely. As a result, the many soil organisms and chemical processes requiring oxygen can get it, water can get out, and plants can develop deep root structures, accessing nutrients from a large volume of soil.

As is already clear, these attributes interact and overlap. Micro-organisms transform soil constituents chemically, and both they and some larger soil organisms produce mucus which promotes aggregation. Improved structure in clay soils facilitates chemical reactions requiring oxygen or atmospheric nitrogen; in sandy soils it promotes those (including the dissolving of nutrients and their absorption by plant roots) that require water. Good soil structure also provides the environment that supports a rich soil life. And so it goes.

Alchemists, seeking to turn lead into gold, may have been doomed to perpetual disappointment, but composters will always succeed in the end because decay is inevitable. Composting, too, “happens.” Any pile of plant debris will eventually decay, or compost; it’s only a question of time.

Given that fact, why bother with “building” a pile? Why not just let nature take its course? In fact, that’s exactly what some people do. They toss everything on a pile. That’s all. Some pull finished compost from the bottom; some start another pile while the first one slowly decays. In most regions (deserts excepted), compost does not have to be turned and tended, nor does it require a specially designated site; it can be set up on the garden itself.

But sometimes things go wrong. Animals or birds can discover such a heap, and if your backyard pile becomes a collecting site for coyotes or raccoons, or even for crows or magpies, you’ve got a problem that ranges somewhere between serious and nuisance levels. Piles can suddenly start to smell, which does not make them (or their owners) popular in the neighborhood.

Precisely because composting is so “natural,” it’s especially frustrating when one’s pile doesn’t behave — won’t heat up, or smells, or appears simply to resist that “inevitable” process. How do these things happen? 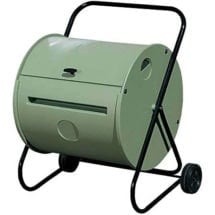 The perfect size if you accumulate less than 2 trash bags of material every month.

A household size composter for daily amounts of kitchen and household throwouts — finished compost in 4-6 weeks! The Back Porch ComposTumbler by Mantis is great for your deck, porch, right outside your kitchen door or next to your recycling bin.

It helps to remember that Nature doesn’t pile all her refuse in a contained area, so compost heaps only distantly resemble natural composting conditions. Where organic refuse does mount up three or four feet deep behind a downed log along a riverbank, animals may raid it or it may smell, just as a backyard pile might. But what’s fine out in the wilderness can be a problem in your backyard.

Then there’s the question of time, an issue that seems to worry humans far more than it does nature. Completely natural, unassisted decay can take several years, while some compost tumblers can produce usable material in a matter of weeks. For reasons that range from lack of space to simple impatience, the “let it happen” approach won’t work for everyone.

Speed is not the only advantage to a more carefully controlled process. All decomposing microbes produce heat as a by-product of metabolism, as do we. A “hot” compost pile, one built and maintained to augment that heat, can reach temperatures over 140°F (60°C), high enough to kill weed seeds, while an unassisted version will not. Even more important, hot composting will also kill pathogens, both plant and human. E. coli and salmonella, which can enter your pile through several routes, will both be killed by temperatures over 131°F (55°C) if they’re sustained over several days, and few “laissez-faire” heaps reach these temperatures. But even the low-burn, no-turn compost heaps tend to do better — decompose faster, avoid odors, repel animals — if they are constructed with some care.

Many Roads to the Same Destination

Most composting information available today pushes the speedy method, achieved with a hot pile in an enclosed bin. Indeed, some books and websites might give you the impression that composting is actually a race, and only speed counts.

You get the idea. You can build a pile above ground or below, with a container or without. You can turn it twice a week or not at all; you can build it on the garden, under the garden, beside the garden. You could probably compost on your roof, if you were determined enough.

If you want to compost, there’s a way to do it that will fit you, your garden, and yes, your lifestyle.