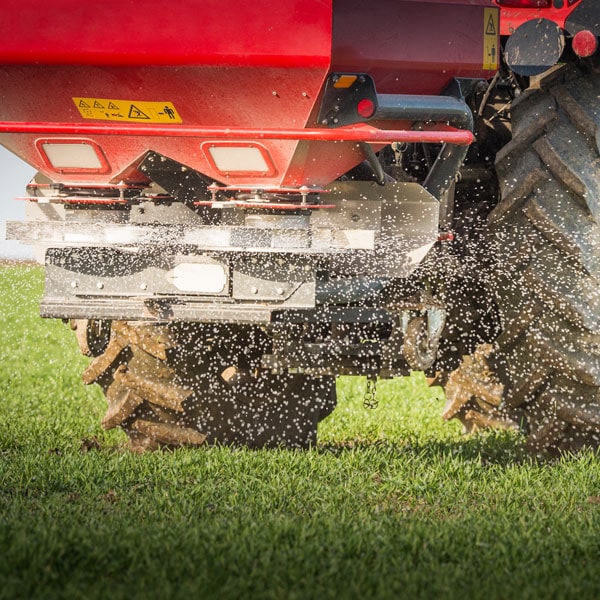 Land and water pollution caused by increased use of chemical fertilizers threatens the environment. Find out how compost can help solve the problem.

Best Product
for Your Garden

As fertilizer use increases around the world, the air and water pollution it causes is becoming an increasingly acute and widespread problem. Large-scale agriculture is not the only culprit. In North America, lawns and gardens contribute significantly. Anything that helps to keep nutrients in the ground and out of our air and our water helps to ameliorate these problems. Compost does this.

Fertilizers and plant nutrients can cause problems in both ground and surface water. In ground water, the primary problem is usually nitrogen. Its source is almost always fertilizers, whether organic (manure) or synthetic. Nitrogen is the most mobile of the three primary plant nutrients, and the one most likely to percolate through soil to reach underground aquifers.

It appears in aquifers primarily in the form of nitrates which can inhibit the ability of the blood to carry oxygen in infants and young livestock. This condition, called methemoglobinemia or blue baby syndrome, rarely afflicts humans over six months of age. But nitrates may also contribute to a range of other health problems in older children and adults.

A potent elixir for your garden! Compost tea nourishes plants quickly without danger of burning. Rich and balanced in nutrients, this precious liquid give plants a boost, stimulating growth and giving them the strength they need to ward off pests and disease.

Both nitrogen and phosphorus reach surface water in large quantities, primarily through agricultural runoff. Both nutrients contribute to eutrophication, the over-fertilization of water, which can in turn cause hypoxia, depletion of oxygen. This is familiar to most through algae blooms, the explosive growth of microscopic algae, which use up all the available oxygen in the region. Fish can often escape, but shellfish are trapped and will suffocate along with many other bottom-dwellers.

High levels of nitrogen and phosphorus in agricultural runoff are almost certainly the primary cause of what is known as the Dead Zone, a growing area in the Gulf of Mexico at the mouth of the Mississippi where all aquatic life has died. Other dead zones have begun to appear around the world, primarily at the mouths of large rivers that run through agricultural land.

The major air pollutant associated with fertilizers is ammonia (NH3). It is a component of many synthetic fertilizers but it is also produced when some organic fertilizers break down. In fact, both in the United States and globally, manure is estimated to be responsible for about 50% of the total ammonia emitted.

In enclosed spaces, ammonia can cause eye and lung irritation in humans, and decreased body weight in livestock. Once released into the atmosphere, it can lead to the formation of what’s known as particulate matter (PM), very small air-borne particles which according to the EPA are linked to a range of lung and cardiovascular diseases. The PM formed with ammonia is especially small, having a diameter of 2.5 microns or less (PM2.5) which means that it can penetrate deep into the lungs.

Ammonia can travel hundreds of miles from its source and can interact with other compounds to increase haze, form acid rain, and over-fertilize crops, forests and arctic meadows. It can be deposited in surface water where it contributes to eutrophication.

In a 2002 report on Air Emissions from Animal Feeding Operations (click here to download a free PDF), the United States National Resource Council (NRC) evaluated nine emissions (eight gases plus “odor”) associated with feeds and manure and rated their significance as Major, Significant, Minor or Insignificant. Ammonia was the only one of the nine emissions that the NRC deemed a “Major” problem at global, national and regional levels.

While agriculture (including livestock) contributes the bulk of nutrients that cause pollution, back yards and gardens contribute far more than one might expect. Homeowners in North America routinely over-fertilize their lawns to the point where the EPA estimates that in the United States, 40-60% of applied fertilizers end up in surface water. This means that the same percentages — only 40-60% — actually get used by the grass (see “Sustainable Landscaping” – PDF).

Compost to the Rescue

As this brief summary shows, the pollution problems caused by fertilizers are not minor. While a number of practices can alleviate the problem at the agricultural level (the timing of manure and fertilizer application, injection of fertilizers into soil rather than surface application, maintenance of buffers between fields and lakes, ponds, and streams, and of course, avoiding over-application of fertilizer), only some of these can be used in small-scale settings. Compost, however, can be used both on rural fields and on city lawns.

Compost can help prevent pollution in at least two ways, by preventing run-off and by retaining nutrients. Interestingly, both are made possible by the same attribute in compost: its ability to provide attachment sites for nutrients.

Nutrient Loss: The chemistry involved is covered in greater detail in the section that explains how compost Boosts Cation Exchange Capacity (CEC). Because compost helps bind nutrients chemically, it prevents them from leaching into groundwater. And because it keeps them in the topsoil where roots can reach them, it ensures that greater proportions of fertilizer applied actually get used by plants. While obviously good for the plants, this also reduces the amount of nutrients that will pollute air or water.

Runoff: Compost berms slow and filter rainwater as it rushes downhill, straining out soil and nutrients so that these do not pollute waterways and so that they are not lost to the land.

In all of these instances, several of compost’s properties come into play. One, of course, is its absorbency. It cushions the impact of rain on the earth, immediately reducing its velocity and its ability to wash away soil. Acting like a giant sponge, it keeps rainwater or meltwater from simply rushing over the land and taking the top layer of nutrient-laden soil with it into the nearest pond or river. Finally, because it binds nutrients, it actually filters them out of storm water, dramatically lowering the percentage that reach streams and lakes.