Which non-organic fruits and vegetables to avoid, plus a "Clean Fifteen." 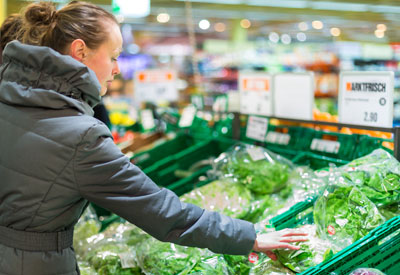 The Environmental Working Group’s Shopper’s Guide to Pesticides in Produce — the Dirty Dozen and the Clean Fifteen — is always anticipated. Fruits dominate the top half of the list. Apples again are number one, then come peaches, nectarines, strawberries, and grapes, followed by celery, spinach, and bell peppers.

The rankings are based on a six-point evaluation that includes a percentage count of tested items found to have pesticides. 99% of apples tested and 98% of peaches were found to hold pesticides. The rankings also figure in the concentration of pesticides on each test piece.

The EWG said that some samples, including cherry tomatoes and strawberries, carried as many as 13 different pesticides.

The report this year also includes a dirty-plus rating for leafy greens including kale and hot peppers. These vegetables were found to have pesticides particularly harmful to the human nervous system.

The Guide also names a “Clean Fifteen,” a list topped by avocados, which were found to have pesticide residue only 1% of the time. Such favorites as sweet corn, onions, grapefruit and cauliflower make the cut. The EWG says that only 5.5% of all the sampled Top Fifteen produce items had more than two pesticides detected.

The Guide also notes that the Clean Fifteen sweet corn, especially packaged ears in the produce cooler, may be genetically modified. Corn is one of the few products in most produce sections, along with summer squashes including zucchini, and Hawaiian papaya, that might be genetically engineered.

The EWG report also makes a good point. With sales of organic foods, particularly organic produce experiencing double-digit growth, it makes no sense (at least to them and us) that big growers continue to spray at will. Consumers are making a choice and the industry should start to listen. Commercial retailers have, if not always for the better.

Your considerate Planet Natural blogger will spare you the rant about buying locally grown, organic produce. And there’s no need to remind us gardeners that the safest fruits and vegetables are those you grow yourself, organically, without pesticides. The season to do just that is just around the corner.