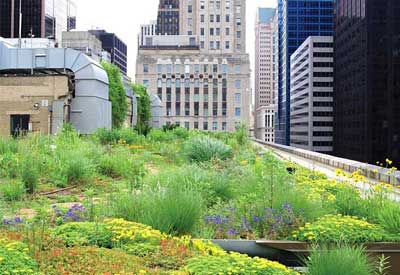 Interest in green roofs (pun warning) continues to grow, especially in urban centers. Their benefits, both environmental and aesthetic, include savings on energy use, thus reducing the impact on global warming (especially in urban areas), helping to control rain water runoff thus reducing loads on storm sewage systems, and providing locally-grown produce to urban markets. “Green roof” is a general term that includes “white roofs,” those that reflect sunlight thus saving cooling costs; “blue roofs,” those that retain water and control runoff; “solar roofs” that heat water or generate electricity, and “living roofs,” those covered with soil and planted, a practice that both insulates and impedes runoff.

Living roofs — especially those planted with edibles — may be the next big thing but the practice is actually quite old. We recall a diorama at the Nebraska Historical Society that showed a “soddy,” a home entirely built of sod. As we remember it, there was even a cow grazing on top of the house.

Living roofs come in two types: extensive and intensive. The extensive roof is completely covered in soil in a depth of one to six inches and planted with ground cover, either grasses, sedums, mosses or something similar. The extensive roof has increased soil depth to allow for a variety of planting, including vegetables, shrubs and flowering plants. Traditionally known as roof top gardens, the intensive roof may not be completely covered with soil. Yet it still has insulating and run-off benefits. The first consideration of any living roof is structural support. It’s been shown that most coded roof structure support is sufficient for extensive roofs which add anywhere from 15 to 35 lbs per square foot. Intensive roofs, depending on soil depth and the type and extent of soil containers used can add up to 200 lbs per square foot. Water weight must also be taken into account when determining structural load.

These seemingly daunting limitations, with careful planning, are actually not so daunting after all, especially when roof-top farming can be a source of profit. Raising fruits and vegetables on urban roof tops not only provides a source of fresh produce but one that doesn’t require long shipping; a win-win situation for the environment. The city of New York is ready to open the equivalent of 1,200 acres of commercial roof top for growing vegetables. And not all roof top farming is commercial. Here’s a school in Manhattan that will raise healthy (hopefully organic) produce for its lunch program. The gardening activities will also be integrated into the school’s math and science curriculum. What’s growing on your roof?