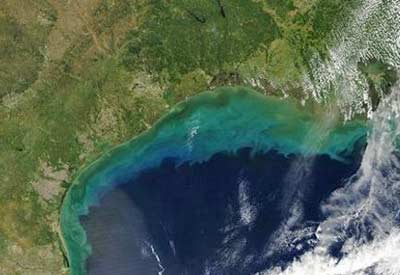 This year’s dead zone in the Gulf of Mexico, usually around 6,000 to 7,000 square miles, might well be the largest in history. The culprit? Heavy rains and flooding in the Midwest. All that runoff from the breadbasket will make its way downstream carrying copious amounts of agricultural fertilizer runoff into the Gulf. Time magazine has the story.

The Gulf dead zone, second largest in the world, is composed of oxygen-depleted water that does not support life. The process by which it forms is known as “hypoxia.” Basically, the process starts with nitrogen and phosphorous- based fertilizers being swept in quantity through the Mississippi River basin and into the Gulf at the Louisiana Delta. The fertilizer fuels the growth of algae which eventually dies or is eaten by zooplankton. Bacteria feed on the mass of dead algae and the zooplankton’s feces, exhausting the water’s oxygen as they do.

Among other negative effects, the dead zone threatens the Gulf’s lucrative commercial and sports fisheries.

Studies show that American farmers badly overuse fertilizer in a misguided effort to increase yields, an effort that also increases their expenses. In China, the problem is even worse.

Why do farmers use so much fertilizer? Corn. Corn requires a lot of fertilizer –195 lbs per acre — and much of this ends up in America’s water courses, especially in wet years like this one. But corn, much of it genetically modified, is a valuable crop, not directly as human food, but as ethanol, corn syrup and other by-products.

Organic agricultural practice could lessen the amount of fertilizer that enters the Gulf. But what passes as organic practice or organic fertilizer in the corporate world of agriculture — fertilizers made from sewage sludge and industrial waste — may be harmful to the environment in both the same and worse ways as traditional chemical fertilizer. At times, especially when used by its manufacturers, “organic” compost and fertilizer may not mean what we think it means.

But good, truly organic agricultural practice, as well as practical measures can help reduce the runoff that creates dead zones in our waters. Practical measures (scroll down) include using less fertilizer and timing its application after rains, controlling livestock waste, monitoring sewage treatment plants and septic systems to avoid their discharge from entering water course, and, most expensively, filtering water before it enters the Gulf (editorial comment from your opinionated, cynical Planet Natural Blogger: will it be taxpayers paying for those filtering plants or will it be corporate agriculture and chemical manufacturers? Just asking…).

True organic and conservation practice could dramatically reduce chemical use and runoff. Techniques including the use of nitrogen-fixing cover crops, smart-use tillage and terracing, soil building programs that not only discourage run-off but encourage nitrogen balancing bacteria, and the judicious use of natural, effective organic fertilizers; all of these methods could lessen the impact of nitrogen run off.

For an interesting read on the global problem of nitrogen runoff and an example of a wise land use being done in Iowa (scroll down), check out this National Geographic article.