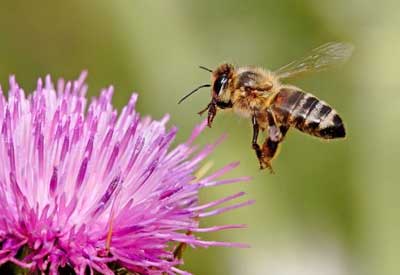 The decline of honeybees in the United States — a third of the country’s hives were wiped out in 2008 — and elsewhere has been a matter of concern for a number of years. Recent studies in France and Britain now point the finger at a class of pesticides known as neonicotinoids. These commonly-used pesticides, which are often used to treat seed corn ahead of planting, work against the bees in two ways: by confusing their homing capability and limiting their ability to provide enough food to their hives for producing new queens. Other studies in the U.S. and Germany indict the pesticides but for different reasons. Calls for banning neonicotinoids were immediate.

Why should we care about bees and pesticides? Honeybees are responsible for pollinating some 70% of the earth’s food crops. No less an authority than Albert Einstein predicted that “if the bee disappeared off the surface of the globe, man would have only four years to live.” Bees are also an indicator species. What happens to them has effects further up the chain of life. To the organic gardener, the honeybee studies are just another reason to resist the use of chemical pesticides. And not just for the sake of the bees.