How to Grow Brussels Sprouts: Guide to Planting and Growing

Plan now to start and grow one of the garden's most nutritious vegetable plants. 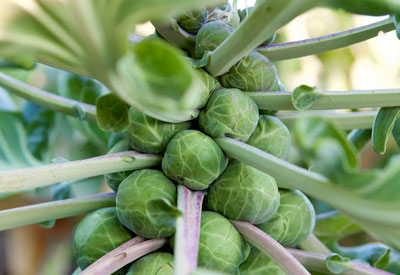 If you’ve always been interested in learning how to grow Brussels sprouts but didn’t know where to start, this article is the perfect beginner’s guide for you!

Brussels sprouts (Brassica oleracea var. gemmifera) were originally cultivated in the 16th century and are named after the city of Brussels, Belgium, where they were first cultivated.

These plants require a long growing season (80 to 100 days) with cool weather. This means when they are grown to be harvested in the fall or early winter. The flavor of the sprouts improves after a couple of light frosts.

These little miniature cabbages are a gold mine of necessary nutrition, and are actually quite different from cabbages even though they belong to the same family, the crucifers, as do kale, broccoli, and kohlrabi.

Brussel sprouts grow on thick stems, with broad leaves. These leaves are also edible and can be cooked in the same way as other hardy greens.

Growing Brussels sprouts is easier than you think. With a combination of a few factors, you’ll be able to grow them without an issue!

Let’s dive deeper and learn how to grow Brussel sprouts. 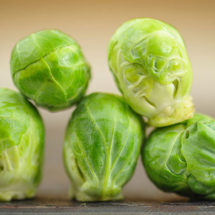 Height: Up to 3 feet tall

Spread: Up to 2 feet

Are Brussels Sprouts Healthy for Us?

Absolutely! Brussels sprouts have enjoyed a surge in popularity lately and much of that is due to the fact we’ve realized how good they are for us.

They are rich in nutrients and contain a lot of cardiovascular disease-fighting and cholesterol-lowering fiber, which is 13% of a man’s daily requirement in a one-cup serving (9% of a woman’s).

Plus, they contain lots of vitamins C and K for bone health, carotenoids for healthy vision, and a surprising amount of protein for a vegetable — 3 grams per serving. A single, one-cup serving has only 38 calories.

Brussels sprouts have a bitter flavor that can come out more when these mini cabbage-lookalikes are not grown properly or cooked properly.

They had gained something of a bad reputation for a couple of reasons. The first was the quality of the sprouts sold at the market.

Often harvested during the still-warm months, or shipped up from southern countries in the spring, they didn’t have the advantage of taking on some cold weather just as they were ready for harvest.

Everyone knows that a light frost brings out a sweet flavor in any of the crucifers.

The other thing that can make sprouts unpalatable is overcooking. Leave those sprouts steaming away on the stove while you go off somewhere and they’ll develop an unpleasant, sulfurous taste.

We’ve written before about our early adventures growing Brussels sprouts. They can be a challenge to the unprepared.

But a little knowledge — knowing what to expect when it comes to soil conditions and pest control — makes them easy and rewarding to grow.

Brussels sprouts may look like mini cabbages, but they’re not actually baby cabbages even though they’re from the same plant family, Brassica, the cruciferous family.

They’re both also cool-weather crops, but the main difference is that Brussels sprouts grow on the plant’s thick stems whereas cabbage heads grow from the ground.

They both have a somewhat similar taste, but cabbage is usually milder. Brussels sprouts, on the other hand, have a denser texture and a more bitter flavor, making them unsuitable for raw consumption.

How to Grow Brussels Sprouts

When to Plant Brussel Sprouts

When you start Brussels sprouts depends on where you live. You want them ready for harvest just as the first frosts begin to appear.

This means starting them in most areas so they’ll be set out in late spring or early summer for fall harvest.

If you live in a place with a short, cool growing season, now’s the time to start them indoors. In our experience, sprouts take a week or more to germinate and will grow slowly indoors.

Even if you’re not going to set them out until the middle of May or later, an early indoor start will give you a jump.

Starting seeds indoors also gives seedlings a headstart and helps to protect them from the summer heat and pests.

Most varieties take 100 days or more to maturity. If you’re setting them out in June in zone 4 or thereabouts, you’ll have spouts coming after the first frost.

If you live in a milder climate, you can direct sow in the garden during late fall for an early spring frost.

We’ve been warned that sprouts grown here, say in frost-free coastal California or along the Gulf Coast, won’t be as tasty as those grown where they’ll be touched by frost.

But we found that the fall-planted sprouts were delicious when harvested during the June gloom of coastal Southern California.

If you have a cold frame, begin setting your plants out as early as a month before the last frost.

Sprout starts can get a bit leggy so make sure if you’re carrying your new plants outside that they are protected from the wind.

How to Prepare the Soil for Brussels Sprouts

Sprouts like a low pH range, something below 7.0 all the way down to 6.0, and they need adequate calcium and potassium to avoid leaf yellowing.

Add plenty of compost in the fall to the area where you intend to plant sprouts. Turning in a bit more in the spring before planting is also a good idea.

Boron is another trace mineral that’s important to Brussels sprouts, as it is to all crucifers. Working some kelp meal into the soil will help give you the right balance of minerals.

It’s important not to grow Brussels sprouts where they or any crucifers have been grown the season (or even two) before.

How to Plant Brussels Sprouts

Start your Brussel sprouts indoors four weeks before you intend to plant them outdoors.

Using a modular planting tray, plant a single seed in each module. Plant the seeds about an inch deep in the tray, and they should germinate in 7 to 12 days.

The seedlings are ready to be transplanted into the garden four weeks after germination.

There are around a dozen Brussels sprout varieties, each having different characteristics.

Some may be more or less suitable for your growing zone or preferences. Here are some of the most popular ones:

‘Jade Cross’ (90 days) is a compact, high-yield compact plant that’s resistant to some diseases. It can withstand windy conditions and is known for its tolerance for hotter weather.

‘Long Island Improved’ (90 days) is an heirloom and a compact, high-yield plant that prefers a cool summer. It’s known for being able to withstand wind and tolerate freezing.

‘Diablo’ (110 days) is a cold-hardy, heavy-producing plant that’s great for you if you live in an area with cold fall and winters.

‘Falstaff’ (102 days) has a purple-red sprout and its color intensifies after a frost, and the hue holds even after cooking.

Here are a few guidelines to keep in mind when taking care of your Brussels sprouts plant:

Brussels sprouts do best in full sun, which means that most days they should get at least 6 to 8 hours of direct sunlight. Too much shade will cause the sprouts to mature slowly.

Brussels sprouts like rich, well-drained soil. They’re shallow rooters so side-dressing your plants with compost a couple of weeks after they’ve gone into the garden is a good idea.

Brussels sprouts like an even moisture level so water just ahead of the soil drying out. Keep the sprouts’ soil moist but not soggy.

To maintain an even soil moisture water deeply and infrequently. 1 to 1.5 inches of water per week should be enough.

Watering sporadically can lead to poor sprout development. A layer of mulch on the soil can help keep the roots cool and keep soil moist.

Foliar sprays are also a good idea while the plants are growing. Their use encourages growth and assures the plants will have the micronutrients they need.

Depending on the variety, Brussels sprouts do best in temperatures between 45 and 80 degrees Fahrenheit. However, they may tolerate short bursts of freezing temperatures.

Apply a nitrogen-based fertilizer 4 and 8 weeks after transplanting or thinning to encourage vigorous plant growth. Avoid applying additional nitrogen, compost, or other soil amendments once sprouts start to appear.

Fertilization during this time will result in loose, rather than tight heads, and may even cause cracking.

Pick the spouts from the bottom up when they start to appear. Also, clip the top of the plant to encourage good heading. As we’ve said, light frosts will only make your sprouts taste better.

If heavy frosts and sustained cold weather are expected, cut your plants from the ground and hang them in your garage or basement. The sprouts should last there for two or three weeks.

How to Harvest Brussels Sprouts

Sprouts will begin to ripen from the ground up after approximately 100 days. You can begin harvesting when the heads are nearly 1 to 2 inches in diameter. Just snip off sprouts to remove the Brussels Sprouts from the stalk.

Also, make sure to harvest from the bottom up as they ripen from the base of the stalk.

Remove any yellowing leaves during leaf pruning and harvesting. Continue picking, as snow does not have to stop production. In fact, depending on the weather and variety, it may even be possible to get a winter harvest.

You can store unwashed Brussels Sprouts in the refrigerator till you’re ready to cook with them.

Brussels sprout plants are susceptible to a variety of factors. Environmental factors, plant diseases, pests, insects, and wildlife can all cause changes in the way the plant looks and how healthy it is.

Understanding what’s causing issues in your plant is important to fix it. Let’s look at what kind of pests and diseases can damage Brussels sprouts.

Brussels sprouts are susceptible to the same diseases that affect other members of the cabbage family. The most common pests are the cabbage loopers, caterpillars (cabbage worms), cabbage root maggots, flea beetles, and aphids.

Flea beetles chew small holes in leaves and seedlings are usually the most vulnerable to this kind of feeding.

Similarly, imported cabbage worms and cabbage loopers feed on the leaves, and seedlings and transplants are vulnerable to them.

Cabbage maggots, on the other hand, feed on the roots, damaging and sometimes destroying the plants. Aphids are frequently discovered eating within sprouts as they develop.

If any of these pests are currently causing issues for your plant, you can click on the links above to dig deeper into effectively controlling them in your yard.

Several fungal diseases also can affect Brussels sprouts, including clubroot, downy mildew, and white mold. To prevent fungus problems, make sure there is enough air circulation around the plants.

Even if you have never before seen disease symptoms, it is preferable to avoid planting cole crops where other members of the same family have recently been grown. New crops can quickly become infected by disease spores in the soil.

Planet Natural offers heirloom vegetable seeds that are easy to grow and quick to mature. All are non-treated, non-GMO and NOT purchased from Monsanto-owned Seminis. Planting instructions are included with each packet and shipping is FREE!

One Response to “How to Grow Brussels Sprouts: Guide to Planting and Growing”