Terrace Farming: Benefits, Drawbacks, and How to Get Started 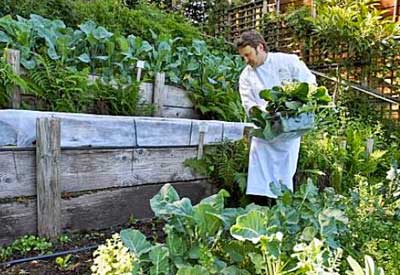 Terrace farming, aka building level steps on sloping ground, is a technique that has been used since ancient times by farmers around the world to grow crops and gardens.

Think the Hanging Gardens of Babylon or the beautiful terraced rice paddies of Asia.

Terraces are one of the greatest tools for landscapers in steep and hilly countries. If your property tilts as much or more as it runs level, you might want to consider terrace gardening in your yard.

As part of good backyard conservation practice terraces can play a role in xeriscaping and water conservation.

Not only do they allow you to reclaim space from the hillside to plant vegetables or flowers and shrubs — terraces can be very decorative — they’re also a great hedge against water runoff and soil erosion.

They can also create warmer, sunnier micro-climates for growing light-and-heat-loving plants and vegetables. Now — in the dead of winter — is the perfect time of year to start visualizing your hillside alive with tomatoes, trailing vines, and stands of beautiful blossoms.

In this article, you’ll learn exactly what terrace farming is, why you’d want to consider trying it, and exactly what resources to use to get started.

What is Terrace Farming?

Terrace farming is the practice of creating flat regions out of a hilly or mountainous landscape in order to cultivate crops. It’s a technique that’s been used in many places around the world from Asian rice paddies to the Andes Mountains of South America.

This method has enabled farming in mountainous parts of the world. The majority of Asia would have been unproductive without it.

And so maybe it’s a good idea to look into terrace farming in other parts of the world, such as Africa, America, and other parts of Asia where it’s not being used, and the potential advantages of it.

Terracing is a farming method that was first used by the Incas in the Andes. Today, terraced rice paddies are widespread in Asia’s highlands.

The terrace is usually a low, flat ridge of earth built over the slope, with a channel for runoff water directly above the ridge. Terraces are typically designed on a small incline so that the water captured in the channel travels gently toward the terrace outlet.

Level terraces may be used in areas where soils can absorb water easily and rainfall is often low.

How Does Terrace Farming Work?

The flat portions allow for soil conservation, preventing nutrients from the soil from rushing down the stairs and down the hills.

When it rains, water flows down the terraced fields. Water-retaining walls catch the water and keep it from running down the slopes and taking soil nutrients with it.

In terrace fields, crops like maize, barley, and rice are grown. Terrace farming is most common in parts of Asia, especially in rice-growing countries and hilly terrains.

What are the Advantages of Terrace Farming?

Terrace farming is a method of properly optimizing the use of available land for agricultural purposes in regions with terrain that features hills and steep slopes, such as the Canary Islands.

And so, those who work the terraced farms and rely on their produce are the ones that benefit the most from this method of farming

Terrace farming acts as a barrier to hold soil moisture and nutrients in while preventing soil erosion and surface runoff. The terraces act as catch basins that transfer nutrients to the field rather than being washed away by rain.

It also enables people who live in mountainous areas to establish productive farms for growing food and industrial crops.

Terrace farming has given people a technique to maintain soil fertility to grow crops since land at very high altitudes is frequently less fertile than the soil at the mountain’s foot.

What are the Disadvantages of Terrace Farming?

Terraced farms are often disadvantaged during the rainy season, with soil becoming saturated. Water overflows from terraces can cause runoff, which can lead to landslides if not properly managed.

They are, unfortunately, also labor intensive to construct and maintain, as they require multiple generations of laborers to create them.

An example of this is in the Philippines where around 30 percent of the Banaue rice terraces have already been lost due to neglect. The terrace itself and its irrigation system had earned this area a UNESCO status in the past.

Climate change has also made it much harder to keep historical terraces in good shape. Changing seasons often bring drought, floods, and other extreme weather conditions that may not have been common in the area before, making it difficult for the terraced fields to adapt to the changing weather patterns.

Useful Resources to Get Started with Terrace Farming

Here’s a site to get your creative juices flowing: a rather detailed drawing of a hillside garden — with a compost bin! — from a gardening blog with a rather risque name. Notice how features like a storage shed, a cold frame, and even steps and benches are built right in.

While this gardener had the help of a professional landscaper, you can see that much of the design — and the work — could be done by any reasonably energetic and skilled handy person.

Here are step-by-step directions, right down to making sure there are no buried wires on the hill you’ll be digging up, for terracing a sloping yard.

Here’s another from the Natural Resources Conservation Center which discusses different materials — wood, stone — to use for the walls and the steps to take to prevent heavy, water-logged soils from collapsing those walls (drainage is important).

There’s also a discussion here of planning for the “run and rise” of your slope; in other words how deep and how high your terraces should be.

You’ll also need to consider the contours of your hill, something that might require a level, stakes, and line, or even the services of a surveyor, to make sure the contours are just so.

Gardeners whose lands are mostly flat can still use the practice of contouring to conserve moisture in their xeriscape.

Don’t feel like you have to convert your whole yard in one season. We’re acquainted with one gardener — the proverbial friend of a friend — who visits only once or twice a year.

Each time he visits, we get a photo journal of his progress. He admits that he did his terraces backward, from the top down. But this allowed him to establish them at intervals.

From a couple of stone-walled narrow spaces where he grew lettuce and marigolds, to a full hillside of growing spaces hosting an abundance of vegetables and flowers, it’s been great to see his progress and to hear him crow.

His neighbors up there in Missoula, Montana get a few tomatoes, sure. But his south-facing slope, with its built-in windbreaks and natural air circulation that keeps off those first few frosts (if not too heavy), gives him a bumper crop.

Need more proof that terracing is a smart thing to do?

Here’s Thomas Jefferson’s huge terrace garden on a Monticello hillside. It’s just another example of the vision and wisdom of one of our Founding — and gardening — Fathers.

With the right gardening supplies growing local, organic food is easy! Planet Natural has everything you need to get started: heirloom seeds, soils and fertilizers. Need advice? Visit our Vegetable Gardens Blog for the ideas, know-how and practical experience you need to get the job done right.