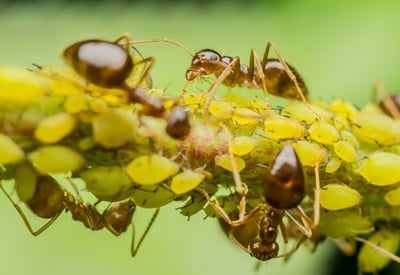 Aphids seem to cause us problems both early and late in the growing season. We’ve found curling, yellowed leaves on chard within weeks of the plants emerging from the ground. Further examination revealed ants coursing up and down the stems. Looking carefully at the undersides of the forming leaves revealed why the ants were there: aphids! Clusters of the green and brown critters could be seen tucked away where the chard leaves created little pockets for them to hide.

Then comes August, when green tomatoes are usually swelling larger on the vine. Some years, we’ve found that fruit swelling coming to a stop and the leaves on our plants turning yellow. Again the problem is aphids, sucking the juice from our plants, denying it to the fruits that are still in the growing stage. This time — aphids on tomatoes were a particular problem when we lived in coastal California — the little critters were a translucent shade of pink and ants were again present.

Growing up, we learned about early aphids when they attacked Grandma’s peonies and late aphids when they appeared on her budding roses. Grandma’s strategy was to tolerate the little buggers. She didn’t think they hurt the blooms, except for the years the infestation was so bad that the flower buds on both peonies and roses, started to discolor and failed to open fully. At that point, when it was too late, Grandpa wanted to spray. Grandma, bless her heart, wouldn’t let him.

Aphids are not only born hungry, they’re born pregnant. Those first aphids you discover in the spring were probably hatched from over-wintered eggs. That’s why garden cleanliness — keeping places where the eggs might survive the frozen months — is important to aphid control. On the other hand, once hatched, the young nymphs can be carried over great distances by the wind. You might keep a clean garden but your neighbor, even miles away, may not. Still, it’s a good idea to clean up in areas where you’ve previously had problems.

Though there are many types of aphids — some 4,000 species have been counted — most of those born from over-wintered eggs arrive already pregnant. This is one of the major divisions between aphid types. Many kinds of aphids give birth, amazingly, to live young. In warmer climates, aphids may go through as many as 12 generations before laying eggs to over winter. This explains why you might see a few aphids one day and a full-blown infestation the next.

Another difference in aphid types has to do with diet. Some aphids will feast on a host of different plants. Some prefer only one or two types. Rose aphids seem to prefer roses and nothing else. This is a non-scientific conclusion derived from my own experience. I’ve had aphids sucking the juice out of my roses but none in my vegetable garden. But then, maybe there are other factors involved, like the way I water my vegetables.

The Gardner’s Guide To Common-Sense Pest Control suggests that some aphids consume different plants in different seasons. This explains why you might find aphids all over your bok choy one day only to discover that they’ve disappeared a few days later. They’ve moved on to their second season crop. The Gardener’s Guide also gives the best advice when it comes to controlling these nuisances: “The first rule of aphid management is to conserve the many natural enemies of aphids present in most gardens.” I like to think that’s why Grandma, in her superior wisdom, wouldn’t take his rusting rose duster to the flower bed.

If you create a safe haven for beneficial insects, you’ll have much less problem with aphids. While ants always seem present when there are aphids — they harvest the honey dew excreted by aphids who are known to ingest more plant juice than they can process — they are not predators. In fact, you might even see an ant “milking” a particularly fat aphid with its feelers, a method used to coax more of the sweet, sticky dew from their bodies. Ants are even known to kill other insects that predate on their aphids.

Even with a safe haven for beneficial insects, you may notice aphids working a plant without a ladybeetle or lacewing in site. This is because there’s a lag between the aphid infestation and the beneficials finding out about it. This is where introducing predators comes in handy. You can purchase ladybeetles to release in affected areas within days instead of waiting for the local cavalry to arrive. Often a cold spring will allow aphids to flourish while their predators are waiting for warmer weather.

Another problem is that ladybeetles will leave an aphid infested plant before finishing off every last one of the little suckers. At a certain point, they’re not willing to work so hard to finish off the aphids when there are so many available elsewhere. This is good reason to develop an environment that includes a number of natural predators, or to introduce a predator that will work with the ladybeetles.

Detecting aphids early is crucial to combating them. Use sticky tape near plants that are susceptible (or with which you’ve had previous problems) to detect their presence. Check plants daily for signs of aphids. Nasturtiums are a favorite of aphids. Grow them in and around your garden and monitor them frequently for any aphids they might attract.

Available from Planet Natural, Green Lacewing feed on a large number of soft bodied pests, mites and insect eggs. A voracious predator, they can consume as many as 60 aphids an hour. Shipped as eggs packed in a carrier (rice hulls), larvae soon hatch out and will feed for 2-3 weeks before becoming adults.

We like to think of dealing with aphids as a hands-on project. Smashing the little blighters between your thumb and forefinger is not only effective, but satisfying (though a little messy). We like to get the kids to join us in this operation — some love to do it (some don’t). Spraying clusters of aphids off plant stems so that they fall to the ground where they can be devoured by spiders and other garden denizens can also be effective. But many aphids will survive by hiding on the bottoms or in the curls of leaves. This needs to be done every two-three days to have an effect.

Insecticidal soaps and oils which prevent the aphid from breathing can also be effective. But plants must be sprayed top to bottom with particular attention to the undersides of leaves. If you make your own soap-based solution, don’t use soaps that are heavy on detergent. Soaps based on coconut oils are the most environmentally friendly. Sprays made from garlic and chile peppers will also repel aphids to some extent. We’ve read that mixing coriander and anise oils, then spraying infested areas, will kill aphids.

Discouraging early season aphids is helped by controlling the nitrogen your plants are getting. Using soluble nitrogen fertilizer early in the growing stages (often just when you want to use it). Aphids are attracted by high levels of nitrogen in plants. That’s why you might find plants you’ve just pruned attacked. The aphids will seek out the high-nitrogen new growth that comes of pruning. Instead of highly soluble nitrogen fertilizers, including manures and fish emulsions, use something that’s slow-released. When fertilizing roses, peonies or other flowers, use a formula that’s higher in phosphorus than nitrogen. Keep pruning to a minimum if you’re having aphid trouble.

I can’t imagine any serious gardener who’s never had a problem with aphids. If that’s you, we’d like to hear about it. For the rest of us: what’s involved in your aphid management program? We’d like to know… 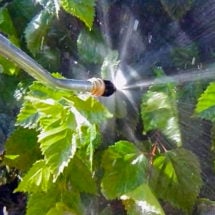 Creates an AMAZING 360° wall of water to blast bugs off plants -- NO toxins!