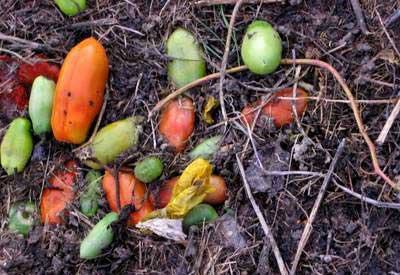 Of all the mistakes I’ve made growing vegetables — and I’ve made plenty — the biggest (or right up there) has to do with not taking the time for a good fall garden cleanup. I can barely bring myself to tell you.

One year, like most years, a fall frost hit the garden and I didn’t bother to get it covered. It withered squash vines and wilted the late plantings of lettuce and spinach. I should have been out there right away, removing all the dead vines, pulling the spinach (some of the lettuce made it back) and not given disease a chance to get a hold in the weakened plants. But I didn’t. And then, after a wet snow, I just let it all go, not putting the garden to bed until well into November. I didn’t know it yet, but by then my lack of action guaranteed that my spinach and chard crops for the next year would be compromised and keeping my squash vines growing would become a battle.

As best I could tell, I allowed a sort of downy mildew (PDF) — not to be confused with powdery mildew which takes advantage of weakened plants and moist conditions to attack squash vines and other plants — to get established in my garden. Once I did go out to take care of business, I simply turned the spinach and other vegetables back into the soil (those squash vines? I at least threw those in the trash). Next gardening season, I was surprised that my chard and spinach, which looked fine to begin with, would grow to a certain size and then develop yellow, almost transparent spots. I tried a liquid copper spray, but it was too late. The spores were in my soil and successive planting all came up infected.

I’d made other mistakes those years as well: planting seeds too close together and not thinning quickly and thoroughly enough which allowed the disease to spread from plant to plant; not having my soil fine-tuned with living organisms from good organic compost that would have helped contain the fungus. But my big mistake was not being prompt and thorough cleaning my garden. So don’t be like me and ignore your garden in the fall. Cleanup! Remove any plant suspected of having fungus from your garden immediately. Don’t put infected vines or plants into your compost heap (unless your compost cooks along at very high temperatures, say 150 degrees or better, that will kill the spores). Throw them away. Vigilance is one of the most effective tools in the organic gardener’s repertoire. In other words, don’t be lazy like I was.

It took several years of supplying my garden soil with good compost, planting resistant varieties, removing plants at the first sign of infection and using cooper spray to rid my chard and spinach — oh how I love those two greens! — of the fungus. And I pretty much succeeded… right about the time I moved away. Lesson learned.