Why this gardener's friend is better than pesticides. 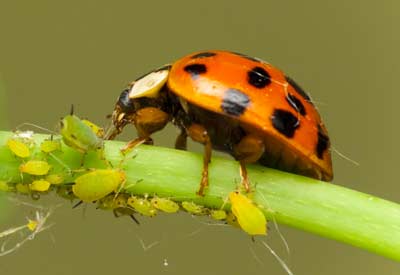 Lady beetles aren’t really bugs. Be that as it may you won’t find us correcting any child singing, “Ladybug, ladybug fly away!” These loveable creatures are actually insatiable carnivores, able to consume quantities of aphids, mealybugs, scales, whiteflies and mites. Often thought of as a sign of good luck, lady beetles or lady bugs (whatever) bring luck to the gardener who has them in her vegetable patch.

When an infestation of juice-sucking aphids strikes any plant, lady beetles will feast, making quick work of the pests. A single lady beetle will eat up to 60 aphids a day, some 5,000 over the course of its life.

There are at least ten types or genus of lady beetles and each will feed on insects harmful to plants. The most familiar and common is the convergent ladybeetle (Hippodamia convergens) though the Coccinella californicus with its distinctive white thorax markings is also commonly seen. All go through the pupae, larval, and adult stages. Finding a cluster of bright yellow lady beetle eggs in your garden is a positive sign.

While lady beetles are an efficient, non-pesticide method of controlling aphids and other sucking pests, their application and use requires special care and timing and even then there’s no guarantee that the benefits will be seen immediately. Lady beetles, wouldn’t you know, can be fickle.

Shop our large selection of beneficial insects, including live ladybugs, at Planet Natural. One half pint — 4,500 ladybugs — treats an average size garden and FedEx 2-Day shipping is FREE! Got pests? Visit our Pest Problem Solver for pest pictures, descriptions and a complete list of earth-friendly remedies.

If you’ve ordered lady beetles to patrol your garden keep them in a cool place before releasing them. Allow them a day or two to start moving around and work up an appetite. Don’t release them too early in the spring while they may still be hibernating. The cool weather may keep them in this state, thus encouraging them to migrate once the weather warms up and they break their hibernation.

Clusters of lady beetles can be stored in the refrigerator for a month or longer. During this time, they’ll live off body fat, as they do in the wild. Again, when ready to release, take them out of the refrigerator and allow them to warm slowly in a cool place before releasing.

Like all beneficial garden insects, lady beetles prefer a moist environment. If they’re released in the heat of the day, they’ll flee to cooler, damper conditions. It’s best to release them in the evening after daytime temperatures have begun to fall. This gives them a chance to move around in the dark and work up an appetite before daylight arrives. It’s a good idea to water your garden ahead of releasing lady beetles and to keep it moist — a good misting during the daylight hours helps — especially in the first days after release.

Lady bugs, er, beetles are particularly efficient in greenhouses. Watch them when first released as they will have a tendency to light on the glass (or plastic) and may dehydrate there and die. Make sure the conditions are moist for the release.

The multi-colored Asian lady beetle introduced to this country accidentally and in controlled releases (it’s a voracious aphid feeder) is not generally believed to be a threat to naturally occurring lady beetles (though this rumor has been spread) but has become something of a pest because it seeks out the indoors — attics, eaves, and other available spaces (like behind walls) in homes — when it hibernates. Because of this, none of our wild-harvested lady beetles are of the Asian variety, though commercially-raised beetles can be.

Buying harvested lady bugs has become controversial. Aggregations of hibernating ladybugs can be found on mountain slopes and in canyons — many of the commercially available lady beetles are found in the foothills of California’s Sierra Mountains — and aggregates have even been found in the mountains of Montana where they migrate to valley meadows in spring and summer.

The greatest danger to lady beetles, as it is for butterflies, is loss of habitat due to housing and other development (note too that GMO crops also pose a threat). The other great danger to lady beetles is the use of pesticides. Still, in the face of these threats, including loss of host plants, there’s little indication that lady beetle populations are declining with the exception of the once common nine spotted lady beetle found in America’s eastern seaboard and mid-Atlantic states … more here. (Note that in both these links the lady beetle pictured is not the nine spotted.)

As the authors of The Gardeners Guide To Common-Sense Pest Control, point out the greatest benefit of using lady beetles in your garden and watching them establish themselves and spread through your surrounding environment is that their presence indirectly influences the use of pesticides. Those who release lady bugs are less likely to spray, which not only allows the ladies to survive but other beneficial insects as well (see The Effect of Pesticides on Beneficial Insects). This is an important step in Integrated Pest Management, one that provides increasing benefits. Even your neighbors might think twice about spraying when they see lady bugs in their yards and gardens, especially if they know the benefits they provide.

In the long run, what would you rather risk: an aggregation of ladybugs that has moved on from your garden in search of more to eat? (Of course, they may return if you have pests … not returning may indicate an absence of pests.) Or your friends’ and families’ health from spraying pesticides which, in addition to the pests you want dead, will kill beneficial insects, including lady bugs — lady beetles, as well? We know which alternative we’d take.

An effective tool for keeping introduced ladybugs around the pest area. 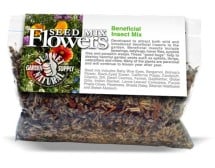 Use to attract "good bugs" that help to destroy harmful plant pests. 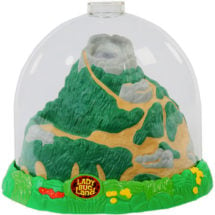 Provides a bug's eye view of this fascinating and very popular beneficial insect. 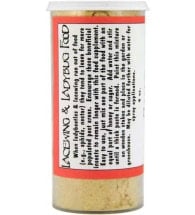 Use to keep lacewing and ladybugs around longer and stimulate egg laying. 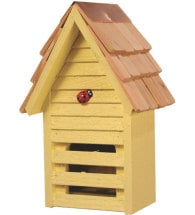 Do we dare say, "cute as a bug?" Keep ladybugs around with this handmade shelter.

One Response to “Ladybug or Ladybeetle?”