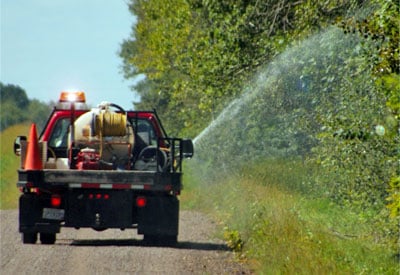 A friend responded to my roadside herbicide rant from our Facebook page last week, a post that (thank-you!) was greeted with scores of comments. Seems he was a hippie back in the day, politically active and, as was common there about the time of the first Earth Day, slowly gaining awareness of the complex web of environmental problems the world was facing. He took his bike out of the midwestern college town where he lived and was enjoying a pedal in the country when he came upon his county’s roadside spray team hitting the ditches hard with herbicide

What they were spraying was wild hemp. Like much of farm country in the years ahead of World War II, farmers in his home state had been encouraged to plant the hardy crop when the Navy started to rapidly expand and the previous source of hemp for rope making, the Philippines, was threatened by the Japanese. This hemp wasn’t the sort that hippies normally liked. It’s uses were limited to what could be made of its skeins and pulp. Only a fool would smoke it. Once it was discovered during the first months of the War that the brand new compound nylon could be used to make rope, the hemp was left to go to seed. It spread everywhere including along water courses and unplowed draws, but grew best (and often undisturbed) in roadside ditches.

Organic gardening doesn’t mean giving up on a well-tended lawn or garden. We’ve got the most effective and safest organic herbicides to keep everything under control. Best of all, they’re safe for use around people, pets, livestock and wildlife. Need advice? Our Weeds Blog provides the ideas, information and practical experience you need to get the job done right.

So our friend stopped and asked the men what they were doing. They didn’t have to remove masks to answer. They weren’t wearing any. The men answered that they were killing off the plants so hippies like him wouldn’t smoke it. Our friend chuckled and tried to explain. But the men just laughed and went back to their business. On the other side of the road they were using the kind of crop sprayer that farmers used to cover several rows at once. The spray was coating a section of the road even as its long arm covered the shoulder and the ditch. Turns out the state legislature in an act of questionable wisdom had earmarked a handsome sum of money to eradicate the hemp that had spread in the ditches and elsewhere.

And it was just at that point that our friend saw something that would change everything. A pheasant was flushed from the weeds ahead of the sprayer and ran across the road to where the men had just finished hand spraying on the other side. There had a been a lot of publicity in the state about how the pheasant population had been on decline.

Now pheasant hunting was a source of pride to this farm state and also an economic boon. Hunters from surrounding states had come for years to hunt pheasants here. But now that too was in decline.

Our friend then started contacting various hunting groups as well as the university biologists. It didn’t take long for the biologists to predict that the spray program, by crippling the bird’s reproductive abilities as well as killing them outright was most likely the largest single contributor to the decline in pheasant numbers. Soon, what he called the hippie and hunter coalition — strange bedfellows indeed — was going to the county commissioner meetings and arguing against the hemp eradication program (yes, our friend says he cut his hair for the cause). Within a year, with all kinds of people joining the cause, the state legislature killed the program. Need I say that the pheasant populations soon rebounded?

This story has many lesson, not the least of which is the harm roadside spraying programs can do. But it also shows that it’s in everyone’s interest to keep harmful chemicals out of our environment, even if those involved are from groups as disparate as hunters and non-violent peace-niks. And it also shows how people joining forces in a common cause can get governments to stop something as foolish, ineffective and dangerous (not to mention expensive) as roadside spraying programs. It took folks in San Mateo County, California six years to put an end to general spraying of roadsides. People in the state of Oregon are rallying against the Oregon Department of Transportation as they educate the general public to the dangers. These movements aren’t just in the United States. People around the world are seeing the harm.

Roadside spraying is just one part of the dangerous, often flagrant spraying of herbicides and pesticides. And while some will argue that we need to spray to stop invasive weeds, evidence shows that spraying can do more harm than good. Roadside spraying is a problem, as our friend’s experience has shown, specific enough that we can fight it. What’s happening in your region to stop indiscriminate roadside spraying? If the answer is nothing, maybe you, like my friend, can join with your friends and do something about it.