A cookbook, SYLVIA'S TABLE, talks about growing and preparing food with children. 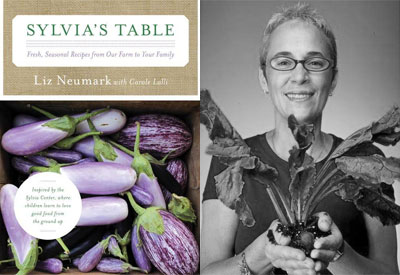 Sylvia’s Table: Fresh, Seasonal Recipes From Our Farm to Your Family isn’t your ordinary cookbook. Sure, it’s filled with great recipes, all of them using fresh, often home-grown ingredients. But its designed with kids in mind. In addition to the recipes, it features essays on the various foods that author Liz Neumark harvests and prepares. It also gives glimpses into the practice of sustainable farming and organic gardening, including growing tips. And it has useful suggestions on cooking with kids, including such things as how to safely teach children to use kitchen knives for slicing.

The book’s emphasis is on healthy, natural foods. But that doesn’t limit what you’ll find here. How does Kale Crisps, Sweet Potato Gnocchi, Hearty Winter Beef Stew, Butternut Squash Bread Pudding, and Caramelized Peach and Ginger Crisp sound? If you know someone who has children and loves to cook as well as garden, this book would make a wonderful present.

Sylvia’s Table has an interesting back story to it. In 2004, author Neumark lost her six-year-old daughter to a sudden brain aneurysm. Sylvia’s goal was to grow up and become a “helpful human.” Her mother thought that the best way to honor her memory and cope with the grief was to establish the Sylvia Center, an organic farm that would be a place where children were inspired “to eat well and to learn where good food come from.”The farm the family purchased, located in New York’s Hudson Valley is called the Katchkie Farm, the nickname for Neumark’s son Sam.

Neumark says the Center’s mission is “to bring children together with good, delicious foods through joyful experiences in the fields and with cooking. The city kids lucky enough to attend learn to harvest and then immediately turn what they’ve picked into a meal. They’re also seeing the principles of sustainable farming and organic gardening in action. Most of what’s harvested is used by Neumark’s catering company. Some of it is sold at area green markets.

Many of the recipes are supplied by well-known chefs. The Fresh Spring Pea Soup comes from Deborah Madison, the original chef at the famous Greens Restaurant in San Francisco. The Barley Risotto comes from Michael Anthony, the executive chef at New York’s famed Gramercy Tavern. Not everyone who offered recipes is a famous chef. The recipe for roast chicken comes from the mother-in-law of a local, organic farmer who raises his own chickens; thus the name, Bertha’s Chicken.

Some of the pages here discuss things that would make wonderful, multidisciplinary lessons for you children. Take for example the page titled “The Language of Cooking: Emulsify.” Not only would kids learn what the word means as well as what the act of emulsifying does but also how to do it. Wise parents would get their kids to spell it; if you do it out loud it makes a sort of rhyme: em ul -si- fy. Do that ten times real fast and see if you can forget it.

The recipes here are all explained simply but in detail. Bonus: Neumark is a photographer and her photos of the farm, the kids, and what they grow are worth the price of admission. Don’t believe it? Check out the photo of the farm pond at the end of the book. Awesome!