The Truth Behind Food Labeling

There's a movement to make organic and natural food labels mean something. 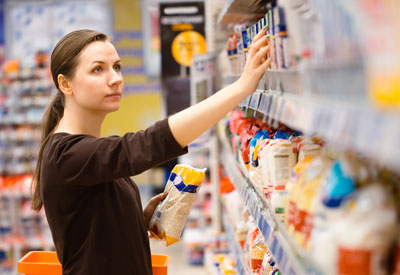 In our world, words like “organic” and “natural” are pretty clear-cut. But that’s not true when it comes to their use on food labels. Use of the word “organic” is controlled by laws and regulations. Some of those rules don’t make sense. The rules that do make sense, the necessary rules (like no pesticide use) aren’t often enforced. Globalization has complicated the issue. Has anybody checked to see those walnuts from Kazakhstan are really organic?

Peter Laufer has. His book Organic: A Journalist’s Quest To Discover the Truth Behind Food Labeling raises some troubling questions (and some troubling answers as well) about the global organic food trade. We’ve plugged it before. It’s creating a stir because Laufer discovers that much of what’s claimed to be organic isn’t. It’s kind of a detective story. He traces the origin of some organic black beans back to Bolivia and decides that they are “as organic as Harry MacCormack’s Sunbow Farm in Oregon’s Willamette Valley.” It’s exciting with the kind of a big-business intrigue that comes of larges sums of money and international markets.

The other labeling term — “Natural” — is also garnering attention. “Natural” has some meaning, that given it by the United States Department of Agriculture when it comes to meat and eggs. But otherwise, anything goes. That’s led to trouble with some 100 lawsuits filed against the likes of Unilever’s Ben & Jerry’s, Kellogg’s Kashi and many others over claims of “natural.” The Wall Street Journal reported that some manufacturers have dropped the “natural” label on some products to avoid future legal action.

Consumer Reports did a study on the public’s beliefs and knowledge regarding food labels. The phone survey of 1,004 consumers found that 59% of the respondents said that they checked for the claim the product was “natural.” “Too many people believe they’re avoiding toxic pesticides, artificial growth hormones, and GMOs when they buy food labeled ‘natural’” says CR.

Consumer Reports asked questions in a variety of categories (40% of respondents looked for a “non-GMO” label, 49% for “organic,” 39% looked for “no antibiotics”) and the document goes into detail in each of these categories as well as into the cultural and conservation issues related to food production (92% of the respondents felt it was important or very important to support local farmers).

But the subject they chose to launch a petition drive is an effort to ban the term “natural” on labels altogether. Here’s why:

“Even though the Food and Drug Administration does not object to the use of the term “natural” if “nothing artificial or synthetic” is added, there’s no definition for the term, which essentially means no regulation and no oversight. As a result, “natural” processed foods can include ingredients from nature that are processed into artificial ingredients and may also come from plants grown with toxic pesticides, bioengineered seeds, and chemicals processed with synthetic solvents. Meat labeled as “natural” can come from animals that were raised with daily doses of antibiotics and other drugs, given artificial growth hormones, fed genetically engineered soy and corn feed and other artificial ingredients and continually confined indoors.”

You might conclude that a ban is a bit severe. Why not set regulation and quality standards, define the term, so it actually carried a distinct meaning to the consumer? There’s the rub. Efforts to define the term have not gone well. Here’s a brief history of the Food and Drug Administration’s sorry attempts (link no longer available) going back to 1991.

It’s a common political phenomenon these days. Any attempt to find common ground between corporate agriculture, government, and consumer interests is going to be nigh-impossible. Somebody always has more money, and it’s not those of us who are spending our cash on misleading food labels.

Before long, the alternative press had picked up the story spurred by the CR report and the movement, though not viral by any means, will gain momentum as more people become aware of it. Nathanael Johnson over at Grist has one of the better takes, saying that, as this link he provides suggests, as long as there are Natural Cheetos there is no “natural.”

We at Planet Natural want the integrity of the word restored. It’s part of our name. We don’t deal in but a few food products. But when used on food labels, where the term promises so much but delivers almost none of it, we want the word — our word! — to mean what the all of it suggests: no chemicals, no hormones or antibiotics, no inhumane treatment. Those of us deeply invested in the word see it meaning other things as well, like sustainability.

This line and its variations have become something of a mantra with us: the best way to assure the food you put on the family table is natural is to grow as much of it as you can yourself. On the other hand, even those of us with large garden plots will buy meats and staples, exotic vegetables and fruits, processed foods and treats; things that we don’t raise ourselves. If they’re called natural, they should really be natural. Let us know what you think. Ban? Definition? What does “natural” mean to you?