Time eggplant starts to go out when soil temperatures warm. 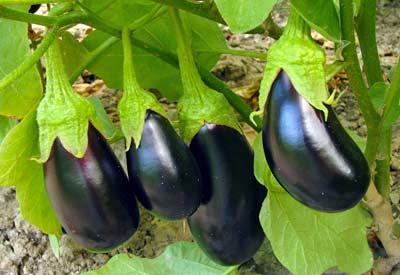 Funny how almost everything that comes up this time of year can get you thinking about gardening. A friend who writes about food was recently extolling a dish he had at one of those Asian fusion restaurants: potstickers stuffed with a savory blend of walnuts and mushrooms set on a bed of cubed, roasted eggplant. Now those pot stickers — Chinese stuffed pockets that resemble ravioli that were, in this case, pan-fried — sounded great. But what our friend raved about was that roasted eggplant. It’s mild taste showed off the high-grade oil it had been roasted with as well as the earthy flavors of the pot stickers’ stuffing. Its texture, at once firm and springy, contrasted with the melt-in-your-mouth filling inside those pockets.

Now our friend is prone to hyperbole when he finds something he likes — after all, that’s his job: to write about food — but of course it got us to thinking about the crop of eggplant we’re hoping to grow in our garden come this summer. Eggplant is very climate dependent. It’s needs a lot of water, yes; but it also needs continual warm temperatures. We’ve grown it successfully during exceptionally warm summers in places that often saw failed crops because of its short summers and generally cool weather. And we even had a couple plants fail to produce during an unusually cool summer in a locale known for its heat. 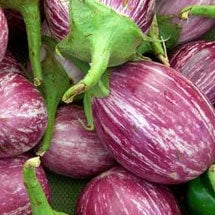 All heirloom eggplant seeds offered by Planet Natural are non-treated, non-GMO and NOT purchased from Monsanto-owned Seminis. Planting instructions are included with each packet and shipping is FREE!

A long, warm season — 55 to 70 days for some early hybrids and Asian varieties, 75 to 90 days and more for those big traditional Italian varieties and some exotic heirlooms from the East — is only part of the eggplant story. The growing season must be consistently warm with daytime temperatures around 80 degrees and nighttime temperatures not falling much below 65 degrees. Anything cooler means slow to no growth once you’ve set out your plants. Like a lot of vegetable gardening, timing is everything with weather variables playing a big role in success.

Like peppers, eggplant is one of the first plants to start indoors. It can take up to two weeks and more to germinate (we get that down to a week with a heating mat) and needs anywhere from six to ten weeks indoors before it’s ready to set out. It’s especially important to harden off eggplant and get them use to the rigors of outdoors. A cold frame is perfect for this.

If you think that long germination and weeks-to-transplant time means you need to get started now, remember this: most gardening guides recommend waiting to set out your plants at least three weeks after the last chance of frost and some recommend as many as five. Putting your plants out too early can expose them to the cold temperatures they don’t like. Nighttime temperatures of 50 degrees or less will discourage eggplant from developing at all. It’s important to have a good understanding of your local climate conditions as well as monitoring soil temperatures when cultivating eggplant. Cloches and other covers can help warm things up early in the season. Again, timing is everything and a little patience can go a long way towards success.

Eggplant needs a good soaking every week and it’s a heavy feeder. Give them a good dressing of compost three weeks after setting out and again every couple weeks thereafter. This is especially important after the plants blossom. Pay careful attention to your plants. We’ve found them to be a favorite of aphids and we’ve learned that cucumber beetles may not do much damage themselves but the diseases they spread can. We’ve seen the tiny holes in leaves caused by flea beetles and still gotten a crop. But because we ignored them, they were back with a vengence the next year. Best to take care of them as soon as you spot trouble.

The care and consideration you take growing your own eggplant is greatly rewarded. Eggplant parmesan, eggplant caponata, ratatouille, stuffed eggplant; these are all wonderful dishes that are not only tasty but good for you. Our vegetarian friends love to use eggplant, because of its texture, as a meat substitute (but it doesn’t have a lot of protein, so find other ways — cheese, nuts, grains — to boot your dish’s protein levels). But we like it prepared simply, roasted in the oven, grilled over charcoal or wood coals (the eggplant will take on a wonderful smokey flavor), or, like the dish our friend enjoyed so much, stir-fried in good oil with some garlic. When you’re enjoying dishes like these made from eggplant from your own garden, growing them doesn’t seem all that much trouble at all.