How to successfully grow organic eggplant. 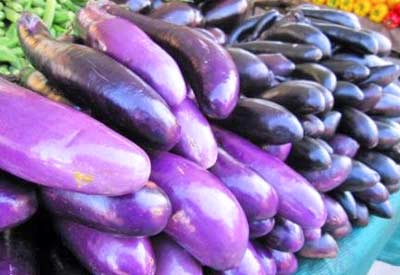 A friend likes to tell the story of how he almost proposed marriage to a woman who made indescribably delicious eggplant parmigiana. Then he found out it was the woman’s mother who was the genius behind that wonderful eggplant dish. So he proposed to the mother instead. The woman, a widow in her 80s, refused because our friend didn’t garden. “Where am I going to get the good eggplant and tomatoes I need?” she protested.

The mother had it right. The sad truth here is that it’s tremendously difficult not only finding good tomatoes in commercial grocery stores but good eggplant, too. All of our favorite dishes are only as good as the ingredients that go into them. Growing eggplant (and tomatoes) yourself gives you a decided advantage when making parmigiana. If you’re lucky, you’ll find good, organic eggplant in your local farmers market. But growing your own is best.

All heirloom garden seeds — not the sort you’ll find in box stores — offered by Planet Natural are non-treated, non-GMO and NOT purchased from Monsanto-owned Seminis. Planting instructions are included with each packet and shipping is FREE!

Eggplant likes the same conditions as tomatoes and peppers. They are easy to grow with one consideration: they need heat, both to germinate and to grow mature fruits (Jere Gettle tells us in his book The Heirloom Life Gardener that the eggplant is really a berry). Give eggplants seedlings a long head start, planting them eight to twelve weeks ahead of the last frost. Using a heat mat under your starts is a good idea, both to get the seeds to germinate and to keep the seedlings growing. Eggplant seed is a notoriously uneven sprouter so plant more than you’ll need just to be safe. Give your young seedlings plenty of time to harden off before putting them in the garden.

The other thing about eggplant is that they’re hardy once conditions are right. You can protect your eggplants from many of the insect pests that take to them — flea beetles, aphids, potato beetles, spider mites — by covering your plants with row covers. Using row covers also has the added advantage of increasing both air and soil temperatures around your plants. Be sure to uncover the plants on hot, sunny days when too much heat might damage them.

The other enemy of eggplant is verticillium wilt. This fungal disease is spread by the same insects that will attack eggplant so controlling one helps control the other. The first rule in preventing wilt is to never plant your eggplant in the same spot year after year. Once the wilt gets established in the soil it’s very hard to remove. Wait four years before putting eggplant in the same ground in which it’s grown before. This seems like a long time– it is! — but that’s what it takes to prevent problems. Using a sulfur -based fungicide may help when plants are first infected, but the best solution is to pull the plants and destroy them. An excellent way to get around the crop rotation problem is to grow your eggplant in containers (be sure to replace the soil and clean out the pots well after each season).

Eggplant likes fertile, well-drained soil. Adding compost around your plants is always a good idea; a balanced organic fertilizer applied a couple weeks after plants have been set out and again after fruits have set is also helpful. The plants produce the most beautiful blossoms. They’re among the most attractive flowers in any vegetable garden.

Eggplant was originally grown in Asia and India and its varieties are numerous. Some of the Asian varieties are so sweet and mild that you won’t have to use traditional methods of salting and pressing to take out their bitterness. Harvesting fruits when young also goes a long way towards achieving the perfect parmigiana. But don’t stop there. Eggplant is a perfect, meaty addition to stir-frys and baked dishes. Want to try a dish that’s a little more exotic? Here you go. Parmigiana? Dig in.