Researchers looking into atrazine targeted by its maker. 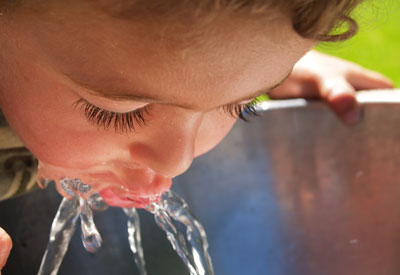 Last week’s blockbuster article in The New Yorker about flamboyant researcher Tyrone Hayes and the crusade to discredit his research on the herbicide atrazine has refocused attention on a controversy that’s been brewing over the last decade. Atrazine, banned in Europe, is the second most frequently used herbicide in the U.S., second only to glyphosate, also known as Roundup. It’s commonly used on farm crops, on golf courses, and by professional lawn care services.

Atrazine has been around since 1958. In the last several years, its effects have caused alarm among water managers and the general public, so much so that some 40 water systems from six different states sued Syngenta, the European-based conglomerate that manufactures the compound, in an attempt to get them to remove the herbicide from their water supplies.

Why? Because in 2009 it was found that atrazine, a known endocrine disruptor at certain levels, was found to be dangerous at levels previously considered safe.

Here’s your best weapon in the War on Weeds. AllDown Organic Herbicide — a 20% vinegar weed killer, plus citric acid — is the product to reach for when you’re tempted to give up or resort to chemicals. OMRI Listed for use in organic production.

An article from 2009 that detailed those reports and went on to examine efforts by the manufacturer and the E.P.A. to contradict those reports, stated, “Recent studies suggest that, even at concentrations meeting current federal standards, the chemical may be associated with birth defects, low birth weights and menstrual problems.” And then there was this: “Laboratory experiments suggest that when animals are exposed to brief doses of atrazine before birth, they may become more vulnerable to cancer later.”

That piece in The New York Times also found that atrazine levels weren’t consistent in agricultural-area waters but spiked to dangerous levels at certain times of the year. The article went on to state that an estimated 33 million Americans have been exposed to atrazine through their taps, according to data from water systems nationwide. A graphic that accompanied the article showed that the percentage of the population exposed to atrazine was near zero in Montana, but over 50% in the corn-belt state of Nebraska.

Atrazine’s negative effects on reproduction and as a cause of birth defects are what’s at issue. The studies used in that article were from a professor of pediatrics at Indiana School of Medicine named Paul Winchester. He was promptly subpoenaed by Syngenta which demanded he turn over all his emails that discussed his study and atrazine. That study reviewed 30 million births and found that children conceived between April and July, when the concentration of atrazine and other pesticides were highest in public water, were more likely to have birth defects. Syngenta immediately attacked the Indiana professor’s work as “so-called science.”

Hayes, a member of the biology faculty at the University of California, Berkeley was asked by Syngenta to look at atrazine in the late 1990s. At that point, the researcher had already published some 20 papers on amphibian endocrinology. As more and more of his research found that atrazine would inhibit the sexual development of frogs, his dealing with Syngenta, as the article says, became strained.

“Strained” is a mild description of the relationship. Hayes began to suspect that Syngenta had a campaign to discredit him and was even following him to lectures and the like. Some of his responses to Syngenta’s attacks were something other than professional further fueling the backlash.

As it turns out, Hayes was right to be suspicious. In 2012, when hundreds of Syngenta documents involved in the two class-action suits originally brought by 23 Midwestern municipalities were made public, it was revealed that indeed Syngenta had targeted Hayes and his work. The cities had sued Syngenta for “concealing atrazine’s true dangerous nature” and contaminating public drinking water. Syngenta, as is so common in suits against corporations, settled.

The documents, published in Berkeley News, showed a concerted effort to discredit Hayes and his work. For an in-depth accounting, read The New Yorker story.

What’s at stake? Consider the contrast between the value of the product and its consequences, especially in an era when corn per say isn’t eaten as corn (or entirely fed to cattle) but used in other products such as ethanol and high fructose corn syrup. After stating that atrazine is cheap to produce, the article goes on to say

A study by the Environmental Protection Agency found that without atrazine the national corn yield would fall by six per cent, creating an annual loss of nearly two billion dollars. But the herbicide degrades slowly in soil and often washes into streams and lakes, where it doesn’t readily dissolve. Atrazine is one of the most common contaminants of drinking water; an estimated thirty million Americans are exposed to trace amounts of the chemical.

One has to wonder if six per cent of the corn crop is worth two billion dollars, most likely spread between the companies that produce products derived from corn, let alone those that profit from raising it (not to mention the companies that manufacture the herbicide). Worth two billion dollars, that is, as compared to the public well-being. This story about what lengths a corporate producer of herbicides will go to will send chills down your spine. It’s also an indictment of the state of science that’s controlled by corporations and the cozy relationship between the E.P.A. and business. It’s all troubling, very troubling. 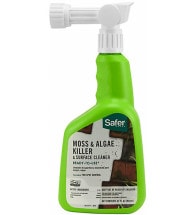 A potassium based soap that kills moss, algae, liverworts and lichen quickly!