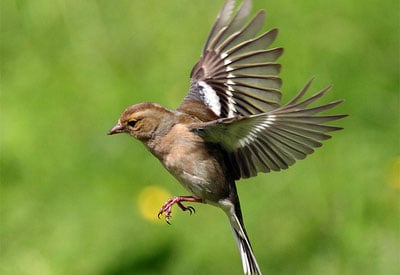 It’s no secret. For years, we’ve known that bird species in America’s farmlands and grasslands have been in steep decline. The assumption was that this was due to habitat removal caused by agricultural expansion and the spread of cities into land once devoted to farming. Now a new study from Canada not only confirms the bird decline but challenges the commonly held wisdom. What’s doing away with all those birds? Pesticides.

News sources both large and small have called attention to the study. You can read it here. A 2009 interview with the study’s leader, Dr. Pierre Mineau, can be found here. Take away quote: “What I find really shocking is when a company does studies that show significant impacts and then continues to market the pesticide around the world. Take granular carbofuran. The first time they did the tests for the EPA they found 799 dead birds of a single species (a lark) in a few fields. Other species were affected also but not in such numbers. Nevertheless, it took about 15 years for that product to be removed from North America – it continues to be used worldwide.”

The irony here is that when it comes to pest control birds are one of the organic gardener’s best friends. A part of any backyard’s integrated pest management system, birds work on our behalf — and theirs — even as they provide joy with their songs and aerial exploits. The same is true, of course, in every farmer’s field.

Those who’ve studied the report say it makes clear that close attention should be paid to any new pesticide slated for introduction into the environment, specifically neonicotinoid insecticides which have been linked to declines in honey bee populations. Neonicotinoids are the fastest growing class of insecticides. Bayer’s Imidacloprid insecticide, a neonicotinoid, is reportedly the corporation’s largest selling product and the most widely applied pesticide in the world. Bayer was sued in a German court in 2008 by a coalition of environmental groups for “marketing dangerous pesticides and thereby accepting the mass death of bees all over the world.”

Birds are often cited as the canary in the coal mine when it comes to pesticide effects on humans. The dangers of pesticides to humans are well known. What about neonicotinoids? A report Imidacloprid: Human Health and Ecological Risk Assessment (PDF) prepared for the U.S. Forest Service states of its studies on rats and dogs that “oral ingestion can cause growth retardation or adverse effects on the liver, thyroid testes, heart, thymus, bone marrow, pancreas and nervous system” (page 37). Could this carry over to us? (The only reported ingestion by humans mentioned in the study were those of suicides.)

In the meantime, a new pesticide — Sulfoaxflor — that’s shown to be water soluble, persistent and highly toxic to bees and other pollinators, is moving quickly through the Environmental Protection Agency’s approval process. Sometimes carving out a safe place in our own yards and gardens with wise organic practice isn’t enough. Sometimes we have to shout — can you hear us Congressmen and EPA officials? — to demand what’s right.