Sand Fleas: What Exactly Are They and Do They Bite?

Sand Fleas are small crustaceans belonging to the Talitridae family that are commonly found along the Atlantic coast. Contrary to popular belief, they don’t bite you since they are not insects but are actually related to crabs and lobsters instead.

These small creatures come out at night in search of organic matter produced by the decomposition of organisms. During the day they like to seek shelter beneath seaweed or tunnels that they dig into sand.

These sand fleas are often confused with Chigoe fleas (Tunga penetrans) which can cause a parasitic infection known as tungiasis or sand flea disease. The other insect that many people confuse sand fleas with is sand flies.

If you’re interested in knowing exactly what sand fleas actually are, and how they differ from ‘true’ sand fleas or Chigoe fleas as well as sand flies, then keep on reading. We’ll also discuss how to identify them and whether sand fleas bite. 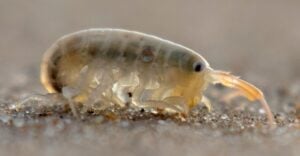 Close Up of a Sand Flea

What are Sand Fleas?

Sand Fleas, despite their misleading name, aren’t actually fleas at all, or even insects for that matter! In reality, they’re very small crustaceans belonging to the Amphipod order in the family Talitridae. They can usually be found along the Atlantic coast.

Sand fleas are also commonly known as beach fleas, land shrimp, sand hoppers, or beach hoppers. They get their name because they jump like fleas and can be tricky to catch, but not because they bite like fleas. In fact, they don’t bite at all since they’re not insects but in the same family as crabs and lobsters.

There are over 90 species of this species in the United States, and they are widespread throughout the coasts of North America.

Typically, they reside around or slightly above the high water mark. They hide throughout the day in tunnels dug into the sand or beneath seaweed that has washed up on the coast.

They come out at night when they’re the most active while searching for food, which is typically organic matter produced by the decomposition of organisms.

Before we move on, it’s important to discuss the confusion around the term sand fleas. There are many other species that all have similar names and are all arthropods, but belong to different orders.

The first are the sand flies that do in fact bite as they are true flies. The other insects also referred to as sand fleas but differ from the ones found near the Atlantic are the ‘true’ sand flea or Chigoes (Tunga penetrans) which are parasitic fleas commonly found in tropical areas in the world such as South America, the Caribbean, West Indies, Africa, and Mexico.

Chigoe fleas burrow into people’s feet, ankles, and lower legs and can severe inflammation and skin lesions as a result of a parasitic infection known as tungiasis or sand flea disease.

Since they are more common in tropical climates, they’re considered to be quite rare in the US. So if you do happen to hear about the sand fleas, it is the crustaceans belonging to the family Talitridae, and they are the ones we will be discussing in this article.

As we explained above, sand fleas aren’t actually insects at all despite their common name. Instead, they become to the Amphipod family and are more like lobsters and crabs. Your skin may develop red, itchy bumps from these creatures, but the discomfort and irritation normally goes away in a few days.

And so, sand fleas aren’t usually the cause of itchy bites and welts on beaches and in other coastal areas. Instead, ‘sand flies’, Chigoe fleas, and other biting midges like them are usually to blame.

Sand flies are true flies. There are many different kinds of sand flies, and most of the time, their bites just feel like mosquito bites and go away in a few days.

However, one particular type of sand flies namely the Leishmania parasites, may be dangerous. Leishmania parasites, which are typically found in tropical climes, have recently spread to parts of the United States, including Florida and Texas. They may cause leishmaniasis, which can result in skin lesions, infections, organ damage, and even death.

Sand fleas are not dangerous to human beings. They often get blamed for bites inflicted by other animals.

How to Identify Sand Fleas

The length of a sand flea may range anywhere from a quarter of an inch to an inch, although they are often much smaller than that.

Sand fleas come in a variety of colors, including gray, brown, and greenish. They have appendages that resemble bears and seven unique thoracic segments. Plus, they also have two pairs of antennae, one of which is noticeably smaller than the other, and multiple pairs of legs.

One of the types that may be found in the United States is called the Atlantic sand hopper, and it can grow to a length of up to an inch.

Sand flea species differ in size and other features. The European sand flea (Talitrus saltator), for instance, is around a little more than half an inch in length and one of its antennas is stronger than the other.

Another common type is the long-horned sand flea, also called the Atlantic sandhopper (Americorchestia longicornis), is often found on the Atlantic coast of North America. It gets its name from the distinctive length of its antennae, which were almost as long as the rest of its body. It can grow to a length of up to an inch.

The common sand flea (Platorchestia platensis), a different species of sand flea, is only approximately less than half an inch long. It is commonly found along the eastern Atlantic coasts of the Americas and Europe. It has distinctive reddish-brown antennae and a blue tail. 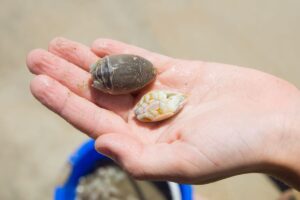 Lifecycle of a Sand Flea

Adult female sand fleas deposit eggs within the brood pouches located on their underside. Eggs hatch directly into juvenile form after approximately one to three weeks of being laid. They resemble the appearance of adult sand fleas.

The juveniles then leave the pouch for one to eight days to start their journey into adulthood. They can live up to 18 to 21 months, with an average lifespan of approximately a year.

Sand fleas come out at night and feed on organic matter produced by the decomposition of organisms. During the day, they dig into the sand or seek shelter beneath seaweed that has washed up on the coast. 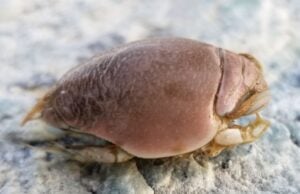 How to Get Rid of Sand Fleas

Sand fleas are unlikely to travel home with you after a beach trip, and prefer to stay in their sandy environment. Therefore, sand flea infestation is highly unlikely.

If you aren’t digging in the sand or picking up pebbles on the beach, you may not even see these jumpy crustaceans since they are most active at night, which is not when most people visit the beach.

Since sand fleas are generally harmless and cannot bite you, there aren’t any insecticidal recommendations to eliminate them.

However, it’s important to identify if sand flies or Chigoe fleas are common on the beach you’re traveling to so that you can take necessary precautions or avoid that area altogether.

Remember, that Chigoe fleas can cause a parasitic infection known as tungiasis or sand flea disease. Sand flies and other tiny pests on the beach may be repelled with a bug spray or oils containing lemon and eucalyptus. The redness and itching that often follow a bite may be alleviated with antihistamine pills or an anti-itch ointment.

Can You Eat Sand Fleas? 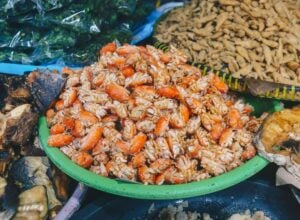