... and other garden tasks we should have done this past year. 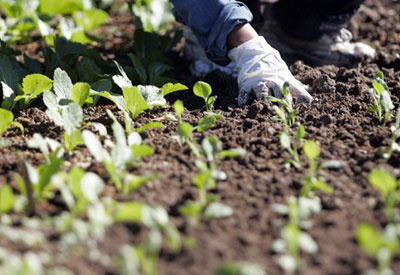 Your friendly Planet Natural blogger is not ready to start making New Year’s gardening resolutions just yet. But with the new year in mind and our ongoing resolve to be a better organic gardener year after year, we’ve gone back through our gardening journal and found problems that we might have solved, if only … well, you know the rest.

So, in the interest of growing better organically, here’s some things we could have done better last growing season.

Fight cabbage moths with row covers: We had problems with cabbage worms of different sorts including cabbage loopers this year, especially in our few stalks of brussels sprouts. Handpicking helped but we missed a few here and there, leaving scarred brussels sprouts and a head of cabbage that was spoiled a good way into its center by an industrious worm that left a slimy tunnel almost all the way to the cabbage’s center.

Our gloating midwestern brother in-law let us know he never had a problem with cabbage worms after he began dusting his plants regularly with Sevin powder and spraying them, just to be sure, a couple times as well. He then told us he also sprays his trees and has never had a problem with bark beetle, as we have in the mountain west. From previous family gatherings, I knew not to remind him that carbaryl, the active ingredient in Sevin, could stay in the soil for over two months and the dangers it might bring to his dog, grand kids, and the environment as a whole. And I knew better to even suggest that the spread of beetles into Minnesota where he lives might be a function of global warming. Instead, I asked him to pass the pie and vowed to never eat his sauerkraut again.

Instead, I resolved to use row covers to protect my precious cabbage plants right from the start. I’d written about the value of row covers a lot in the past. But I hadn’t taken my own advice. Knowing that moths migrate into our area as the weather warms in the spring suggests that I can keep them from laying eggs on or near my plants simply by covering the plants.

Just because I hadn’t had a problem with cabbage worms in previous years didn’t mean I wouldn’t have them sometime in the future. The best organic gardening practices are all about prevention. I should have taken this to heart and utilized row covers before I had a problem. Row covers are a good investment. After the moths have disappeared later in the season, I can move the covers over to shade the lettuce and other greens sensitive to the hot sun. That will extend the harvest.

Experiment with beneficial nematodes: Not all cabbage worms arrive in our gardens as moths. Some overwinter in the soil, as larvae and eggs, protected by mulch or in the garden debris left behind from the growing season. Row covers won’t stop them. But maybe nematodes will.

In a moist, dark environment Scanmask® Beneficial Nematodes actively hunt, penetrate and destroy over 230 different pests including fleas, fungus gnats and white grubs. Best of all, they’re SAFE for people, pets, plants and earthworms. Use one pint per 500 square feet, or 1,050 4-inch pots.

Used by organic-minded landscapers like us to kill grubs and other pests under our lawns, these carnivorous little creatures will also attack eggs and larvae they encounter in the soil. Maybe if we’d utilized them in our garden soil where we planted our cabbage and other cruciferous vegetables, we wouldn’t have had pests burrowing out of the soil and on to our plants. We think it’s worth a try. Has anyone else tried this?

Have your soil tested: Those of us who’ve gardened a few years, enriching our plot with plenty of compost and other soil amendments, can easily take such things as soil pH for granted. Last growing season, because we used a mulch that was heavy in acidic pine needles, we spread dolomite lime over our entire plot, assuming that our soil might be a little too acid (the other reason we used it: we had dolomite left over from spreading on our lawn).

But did we really need it? Maybe our adjustment made the soil too alkaline. Our tomatoes didn’t seem quite as healthy this year when everyone else was having a good tomato year. Cabbages, which operate best at a pH reading of 6.0 to almost 7.0 certainly had problems. If only we had tested, rather than assuming, before we planted. Testing is easy with today’s modern soil testers and our local extension service is ready and willing to give us comprehensive results that include mineral levels and other good things plants might need. Gardening, as my grandfather used to say, isn’t luck. It’s hard work. And science.

Finally: There are other things we should have done in the garden as well, like take more time to enjoy it. But this coming year, well, we’re going to concentrate on prevention and taking care of problems before they begin. Sounds like we might have a start on our New Year’s garden resolutions.