Why does a commercial tomato not taste as great as a homegrown heirloom? 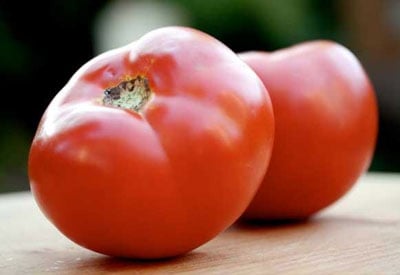 It’s no secret that most commercially grown tomatoes taste lousy. Now scientists have discovered the reason: a gene mutation, the one bred into tomatoes to yield consistent color. It seems that tomato breeders discovered the gene about 70 years ago and began to cross-breed it into nearly all commercial tomatoes so that they would have an attractive red color. There was just one problem. Adding the redness gene “turned-off” flavor genes, the ones that created more sugars and carotenoids, various compounds in the tomato that contribute to flavor. The result? Tomatoes that look good but taste like paper. Here’s the abstract of the studies that determined the effects of the “redness” gene. Now we’d like to see the marketing studies that motivated commercial growers to think consumers prefer perfect red fruits without regard to taste.

It’s worth reading the comments at the end of the article to hear people lamenting about the lost flavor of the tomatoes of their youth. Or how the tomatoes they grow, or buy from small, organic farmers, may have streaks of green and be misshapen… but taste great. At its end, the article reveals the secret to getting great-tasting tomatoes: “But, Dr. Powell said, there is a way around the issue. Heirloom tomatoes and many wild species do not have the uniform ripening mutation.” This seems to be one of those examples of scientists — and in this case, commercial tomato growers — learning something those of us who garden or buy produce at farmers’ markets already knew. Ready heirloom growers? On the count of three: We told you so.