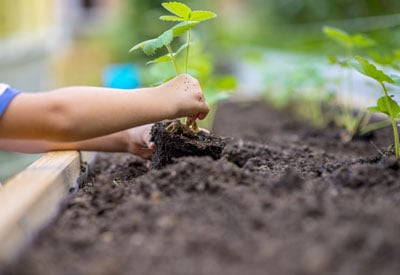 Soda bottle composting lets kids watch the decomposition process happen in a bottle they can hold in their hands. It’s usually done in clear soda bottles, which are cheap, easily available, relatively indestructible and transparent. Since the volume of compost produced is so small, it’s a lousy way to generate compost for the garden. However, if you want to show your children or your students what happens in a compost pile, this is a great way to do it.

Putting a micro-composter together is the work of an afternoon, but the composting process takes a couple of months. For teachers, it’s not an especially good project for the last week of school. But it’s an excellent one for the slow winter months. If the school has a garden on which compost will be applied in the spring, this project gives students a hands-on understanding of the stuff they’re spreading over the soil. In an urban setting, the micro-composter lets children see processes that might otherwise remain completely foreign to them.

At Planet Natural we’re here to help you create a successful and memorable growing season with your young ones with just the right-sized tools and equipment, planting kits and bug collectors to get the whole family involved!

Micro-composters are constructed from either two or three two-liter soda bottles cut apart so they can be filled with solid material and then fitted back together securely. Holes are punched to aerate the contents, and the bottles are filled with a mixture of damp organic materials before being closed and insulated. At this point, composting begins.

Several slightly different methods are detailed online. One on the Cornell composting site, uses two soda-bottles; another hosted by the Los Angeles County Office of Education (LACOE), describes how to construct a column which can be expanded to three bottles. Both include lists of materials needed, diagrams, concepts the project explores and teaches, and other useful material. A third site offers a version very close to that at the LACOE site, but downloadable in a variety of formats, including as a PDF or Word document.

To construct Cornell’s version, called a “bioreactor,” cut the tops from two soda bottles, slicing one off just below the neck and the other an inch or two lower, so that when the longer top is slipped over the taller bottle, the two overlap securely. The smaller piece from each bottle will not be used.

Now you need an aeration system, which is made by creating a space open to the outside air at the bottom of the bottle, then separating it from the composting material. That may sound difficult to arrange but it turns out to be quite simple. Holes in the bottom inch or so of the bottle provide air, and a Styrofoam disk resting on a support creates a space that the compost can’t get into.

Anything an inch or so high on which the disk will rest securely can serve as a support, as long as it is significantly smaller in diameter than the bottle. To make a support from a smaller bottle, cut it in two (crosswise) about an inch from the bottom. It’s this bottom with its rim that you want, not the rest of the bottle. Set the support rim-side down in the soda bottle and cover it with a Styrofoam disk. The composting material will rest on the disk; the space below it will provide aeration. There must be plenty of space for airflow between the support rim and the sides of the bottle. On the other hand, the disc must fit tightly so it doesn’t slip sideways and let composting material drop into the cavity below.

Next, mark where the Styrofoam circle sits in the bottle, then remove it and the support it rests on. Using a hot nail poke air holes in the disk and in the sides of the bottle below the mark.

When you’ve returned the support and circle to the bottle you’re ready to fill it with organic material. Here’s the list suggested by Cornell:

Fill the bottle loosely with approximately equal amounts of items from column one and column two, making sure the ingredients are damp but not wet. You can provide a secondary source of oxygen by building the pile around one or two straws that rise above the bottles. Fit the “lid” onto the bottle so that the straws protrude from its mouth. Cover the mouth of the bottle with mesh or netting or put the entire bottle into a nylon stocking and tie it off at the top. This will contain any insects that might breed in the bottle. Finally, wrap the bottle in old clothes or blankets to insulate it.To anyone who has kept a compost pile in the back yard, these lists will look familiar. “Bulking Agents” correspond with “brown” ingredients, while “Food for the Microbes” bears a remarkable resemblance to “greens.”

A long thermometer inserted through the mouth of the bottle and down into the contents will let you track temperature changes. This material won’t get nearly as hot as a large pile but it will definitely warm up.

L.A. County’s version, which adds an optional third bottle to the first two, could theoretically have a fourth… or even a fifth. Of course, the structure would grow more and more unstable but the idea is intriguing. Nevertheless, in this discussion we will confine ourselves to the two- and three-bottle options.

Dispensing with the Styrofoam and the smaller bottle these micro-composters require only the simplest materials. The top of one bottle is covered with mesh held by a rubber band before being fitted down into the body of another bottle that has been cut approximately in half. The mesh allows excess moisture to drain out of the composting material into the chamber beneath it. Aeration is provided by holes poked in the bottles.

The upper bottle can be capped, making a two-bottle composter, or a third bottle can be added to accommodate a larger volume of material. That decision should be made early in the process: how you cut the second bottle depends on whether you plan to add a third or not.

Start by cutting a bottle approximately in half. The lower portion, which can be a bit longer than the upper, will be the base of the structure. The upper portion will become the cap.

Next, cut the bottom off a second bottle. If you’re planning a three-bottle structure cut where the sides are straight. (This is piece #2 in the diagrams below.) For a two-bottle composter, cut as close to the bottom as possible so that the sides taper. The three-bottle composter needs one more piece. Cut both the top and bottom from a third bottle, tapering both ends. (This is piece #3 in the diagrams.) 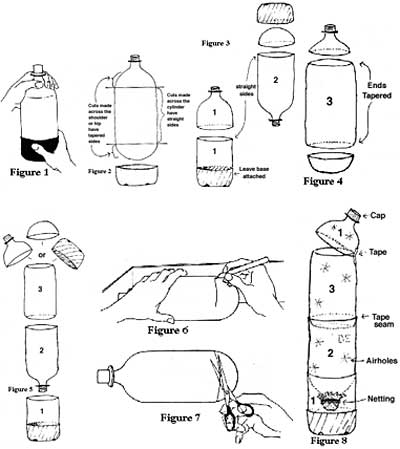 The top bottle of both versions should taper. Now fit the cap over the top bottle but do not tape this seam yet! You need to be able to remove the cap to fill the micro-composter.

Finally, with a hot embroidery needle poke holes here and there the length of the bottles to provide aeration. The composter is ready to fill.

Micro-composting will not yield material as fine as that from a larger or hotter system. However, after enough time passes, it should be impossible to determine what the original ingredients were. At this point, the volume will be reduced by half or more.

The LACOE website recommends including some dirt in the mix to provide a source of microbes; Cornell says nothing about that. Among the many comparisons possible with micro-composting, one experiment would be to set up two vessels that are identical in every way except that one contains some dirt and the other doesn’t.

Small pieces always compost more quickly, but cutting up material will make an especially big difference in small reactors like these. Again, it could be interesting to see how a particular item fares depending on whether it has been cut up or not. Since this experiment requires searching through composted material for a specific item, it’s best to choose something easily identifiable like banana or orange peels.

Neither site recommends shaking the composters in order to mix the materials or aerate them and neither do we. The Styrofoam disk in the Cornell bio-reactor could easily become dislodged if the bottle got a vigorous shaking at the hands of an enthusiastic ten-year-old, and once that happened, the whole system could be thrown off. The LACOE system has no disk but it does have several seams — which could come apart — with consequences too awful to contemplate.

This project can help teach a wide range of skills, including observation, note-taking and writing (“Describe your experiment to your pen-pal in Cameroon…”); arithmetic (by how much has the temperature risen/ fallen between last week and this week?), mathematics (by what percentage has the volume dropped? What is the rate of change?) and research (“Find one fact about compost on the internet and another in the library, “or ” Find out how this town/county disposes of organic waste.”). Children could be asked to design an experiment to test the efficacy of their compost (apply it to potted plants), and to control for the differences amongst their products (mix them together.) Even politics can be part of the mix. Children can write letters to the local government urging that it compost organic wastes, or to state or federal representatives or agencies, urging funding for municipal or county composting facilities. Infinitely useful in the garden, compost is infinitely adaptable in the classroom. Besides, it’s fun.

Given the rate at which our landfills are filling and the difficulty many cities have disposing of their waste, not to mention the serious pollution caused by organic garbage once it reaches landfills, composting has moved from being a gentleman’s hobby to being an economic and environmental necessity. Micro-composting therefore provides a chance to discuss issues of both local and global significance.

But while discussing major problems with young children can sometimes instill fear and a sense of powerlessness, this project immediately demonstrates a solution that is accessible to everyone. In fact, micro-composting doesn’t just demonstrate a solution; it enacts one and children (along with microbes) are the primary actors. With this project, composting moves out of the theoretical arena to become immediate, practical and real.