Organic tomato pest control means watching out for a fat green worm -- with a horn! 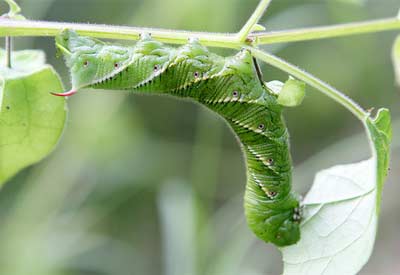 A friend, an avid organic tomato grower, has started her harvest and you know what that means. Tomato Festival! The festival usually runs from the first weeks of August right up to the first frost (at which point it becomes Green Tomato Festival or the Wait-Until-These-Tomatoes-In-the-Windowsill- Ripen Fest).

The event, held in kitchens around the country, is an unofficial celebration of one of our most cherished home-gardening products. Our friend grows heirlooms and so far this year has a bounty crop of golden jubilee, a juicy, subtly flavored orange tomato, as well as big, bold brandywines, and a few unusual, tremendously sweet, strangely colored chocolate stripes.

What does she do with them? Hint: she makes her own mozzarella. And, of course, she grow her own basil which is just doing wonderfully this year. So we started with Caprese salad (no vinegar, just olive oil), the tomatoes set in a wheel on top and sometimes under slim slices of her deliciously smooth homemade cheese pinned together with basil blooms. Then it was a simple pizza margarita with a chop of tomatoes serving as the sauce on her satisfying pizza crust (made with organic flour), all topped with rounds of mozzarella with a sprig of bright green basil placed at the center after the baking and the slicing. Mamma mia!

No need to mention the wine, the fresh garden greens and the roasted beets and purple potatoes that were also on the menu.

When we’d eaten all we could, she brought over a brandywine. In its otherwise perfect skin was a hole as if someone had stuck a pencil point into the fruit. Then she brought over a jar. The culprit was inside, a fat green caterpillar with chubby little legs and, what looked to be on closer inspection, a horn. Tomato hornworm! There was a discussion as to which end of the tomato worm had the horn. Once it started moving, that discussion was settled (the back). Our host explained how she’d spotted a few holes in her leaves and even some on developing fruit. Then she found this formidable critter on the lowest leaves of one of her plants. She also found some of its feces, the stuff known as frass. She found only the one but figured there were more. Then she said it was time for us to earn our supper.

She handed out flashlights and headlamps to the four of us. Then we went out to find the little buggers. She explained that the worms stayed near the base of the plant in the day and crawled up to feed only after dark. The fact that they’re green only made them harder to see. She said if we found a worm carrying what looked like white eggs to leave it be. Those were the eggs of a parasitic wasp that would hatch on the worm and use it for food. We wanted to encourage that, even if it did sound like something out of a horror movie.

We searched and searched through her dozen or so tomato plants. I spotted some leaf damage but no worms. My friend Jerry did better. Opening up his fist in the light of his headlamp, he displayed his prize. It wasn’t as big and impressive as the one our host brought out in the jar. But it’s tomato eating days were over.

If you have large infestations of hornworms — in other words, if you see a lot of damage, you can eliminate them with Bacillus thuringiensis (Bt). If you’ve had infestations in the past a preemptive dusting might be a good idea. Always follow the directions and wear a mask when applying. Beneficial trichogramma wasps will also lay eggs on the eggs of the hornworm, taking them out before they have a chance to do damage.

But our friend’s experience with horn worms wasn’t so bad. We went back into the kitchen for dessert — rhubarb pie! — and discussed the worms that, in their jar, were serving as a centerpiece. James said he’d read that spraying the tomato plants with water made the worms begin to gyrate and dance around, making them easier to spot. But our host suggested that spraying plants with water might encourage mold and fungus and wasn’t a good idea. She thought that because we’d all spotted damage, that there were worms we’d missed. Or maybe they’d already become the large and attractive moths that the horn worm becomes.

At that point I had an idea: why not invite us over for dinner again next weekend and we could go out and look again? Everybody thought that was a good idea. Our host only smiled.