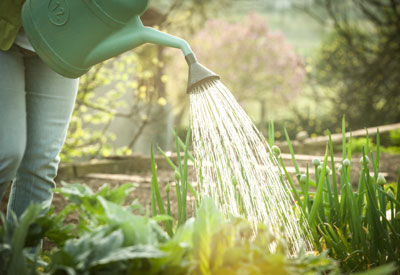 A friend of Planet Natural, big on words and vegetables, writes in with a summer gardening report. We added the links:

We got our vegetable garden in late this year. But the heat we’ve had the last few weeks made catch-up easy. There’s no watering restrictions here in our part of the Pacific Northwest, so it’s been easy to compensate for the dryness. Besides, our garden is so small — not much more than two 4×6 raised beds — that it doesn’t require much water.

Our greens and lettuces planted square-foot style germinated quickly and were soon offering thinnings for salads. Rapini, the leafy Italian broccoli has been a special treat, wonderfully mild tasting (despite the heat) when added to stir-fries and pastas. The arugula has been especially productive — we’ve even juiced if for a spicy, summer drink — and still we haven’t tired of it. 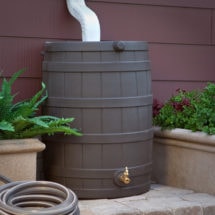 Here’s a rainwater collection system that’s no-fuss — with a touch of magic. The Rain Wizard 50 gallon rain barrel captures runoff from your roof and stores it for a not-so rainy day.

We’ve been less lucky in the second box. We designated half of one raised-bed to grow peas and beans — a row of peas against the fence where they could climb, and nine bush bean plants spaced together as tightly as we dared. Surprisingly, only a single pea shoot and one bean sprout emerged. At first we thought we had some bad seed with poor germination. A test — soaked seeds wrapped in a moist paper towel — resulted in all but one seed germinating. So we replanted.

What happened became clear a couple days later when obvious mole tunneling lifted the soil in the familiar, tubular way. A mole had tunneled under the neighbor’s fence and into the box where its digging and rooting had doomed the seed we planted. As far as I know, the mole didn’t eat the seeds — several were laying exposed on top of the soil — but was there looking for grubs. The return visit made us wonder if we had a grub problem.

Snails had been a problem early in the year. They finished off a couple of summer squash sprouts just after the first true leaves appeared and they were particularly hard on the one rhubarb plant we have. We were finally able to block them by encircling the plants with coffee grounds. Once the weather dried up, they weren’t as conspicuous.

What did become conspicuous as the weather warmed were cabbage worms; that and the holes in the leaves of our three broccoli plants. They also seemed to like the rapini. But they pretty much left the kale alone. On the hunt, I was rewarded when inspecting the leaves of the three plants and finding eggs and larvae on their undersides. A farmer once told us that the best way to repel bugs was to smash one where you didn’t want them. For a while this year, using my green thumb as a weapon, I began to believe it.

I was also lifted by the sight of wasps flying among the broccoli and arugula and other plants the moths were favoring. Some of these wasps were so tiny you could hardly see them. Others were the big, familiar hornet size. I’ve spent a good part of a couple afternoons watching them work the leaves, working eggs into a worm in a repeated humping motion. Fascinating. I realized these little critters might help keep the moths under control just enough to keep damage to a minimum.

And they have. We’ve already enjoyed wonderful salad nightly as well as those green pasta and stir fries mentioned early. Like most home gardeners, we don’t mind a few small holes in our lettuce leaves. Those salads and the exercise we get gardening — we need it! — made our tiny plot worth it.

Just in the last few days of our current hot spell, the arugula has started to shoot up blossom stems and the rapini florets have gone full, yellow flower. Some of the lettuce is showing that cluster of center growth that results in it going to seed. I haven’t been able to pick enough to keep up and I’m afraid those early season crops may be at a premature end. But after all, it is mid-summer.

I’m already thinking about planting my fall succession crops and have decided I won’t want to rush into that. Might be good to wait a week or two longer, maybe into August, before getting them started considering how warm the last couple August and September’s have been. Don’t want a second crop that’s stunted from the heat and lack of moisture, or one that almost immediately goes to seed.

I’m glad I’ve kept a garden journal the last several years. It’s been a comfort this season, going back years to discover we’ve had some warm growing seasons then, too. This year may be particularly dry in my corner of the world — even the rain forest is on fire — but that means less chance of mildew on the beans and a greater chance of vine-ripened tomatoes.

Last year was a great year for tomatoes here, with an unusually long growing season. I’d bet the same odds this year — so much of gardening is a gamble — and planted tomatoes in a bale of straw in hopes of fresh, ripe early girls. Too bad I didn’t notice the spider mites on the tomato starts I purchased at a big-name home and garden store. Did I miss the clues at the store or did the mites introduce themselves once the plants were in my garden? A trip back to the store solved the mystery: all the remaining tomato starts were showing the signs- curling, yellowed leaves, brown ends — of spider mite damage. I’d been had.

Sitting back in the evenings and enjoying the scene, two broad-leaved crook neck squash plants crowded with yellow blossoms, I felt like this year, every year, was my first at being a gardener. Every year, every season is different in its conditions and challenges. As I’ve moved around, my gardens get smaller and smaller. But their satisfactions just continue to grow. 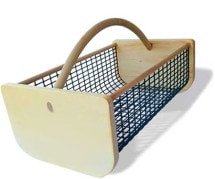 Handmade in Maine from quality hard and soft woods and lobster trap wire. 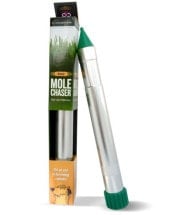