Tips for using straw as a mulch (and more!) in the vegetable garden. 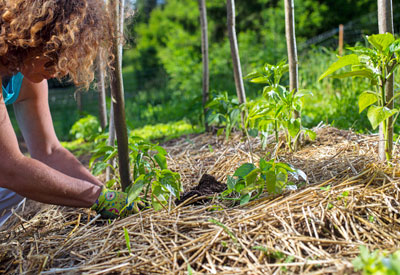 This is a great time of year — when farmers are looking to get rid of old ones — to pick up one or two straw bales. You might also be able to buy bales at your local nursery or gardening store but they’ll probably cost more. They make great seasonal decorations … put a trio of various shaped pumpkins on one (or a stack of two or three) in a strategic place visible to passersby, balance a sheaf of corn stalks against it if you have them and voila: Autumn’s great visual symbol of harvest. Then, when the season is over, you can break them up and use them in your garden and compost pile. Or can you?

The problem with straw is that it often contains seeds. Hay, in our experience, is even worse; it contains more seed than a nursery in March (not everyone makes the distinction between “hay” and “straw” … see this article for the difference). The best straw for gardening comes from wheat or oats, if you can get it. Most of the seed has been removed depending on how effective the farmer’s thresher is and how much weed has grown in his field. But I still wouldn’t put it in your compost heap unless it’s hot enough to destroy the seed. Temperatures of 130 degrees will usually do it but hardy seeds will require 30 days of 145 degrees or better to take them out, according to the Weed Science Society of America, conditions that aren’t always easy to maintain. The WSSA also suggests turning your compost regularly to avoid any weed seeds surviving through the process in the pile’s cool spots.

The leader in organic gardening supplies since 1991! Planet Natural offers 100% safe and natural products that really work. Come see what we can offer your garden, your yard and your family.

But using straw as mulch is a different story. The secret is to keep the mulch deep enough, say six to eight inches or more. This both provides enough cover to keep weed seeds from sprouting and makes those that do easy to pull from the moist soil. And everyone knows the benefits of using mulch, right? One of my favorite fall practices is to sow some hardy greens in late September or October and literally bury them under mulch. The mulch doesn’t have to be straw. It could be finely chopped leaf mold for that matter, just as long as it’s deep enough (but not too compact) to protect overwintering seeds and seedlings. Then pull away the mulch in the spring after the weather starts to warm. You’ll have harvests of kale, spinach and other greens weeks early using this method.

A new use of straw bales — at least to me — is the practice of planting crops directly into the bales, or straw bale gardening as it’s come to be known. Basically, a bale of straw becomes a container. You can plant seed directly into the bale with the addition of a little soil or compost, or you can scoop out a spot in the bale to fill with soil and then transplant starts directly into the bale. By the time the growing season is over, the bale is well on its way to becoming compost. The advantages are that the bale hold water — in this it’s much like hydroponic gardening — is usually disease free and supplies easy rooting for the plant. Or so I’m told. We haven’t tried this method but are looking forward to trying it next spring… if only my sweetie will let us drag a bale or two home and put it in the yard. Here’s a video with more details.