Ladybugs To the Rescue

Learn how to fight garden pests with the best known insect predator available. 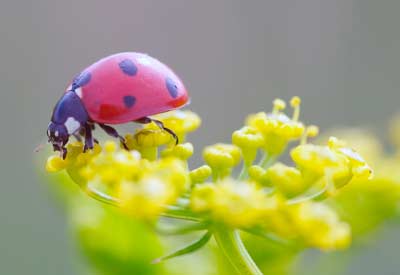 America’s largest shopping mall, The Mall of America, in Bloomington, Minnesota, is as well known for its attractions — an indoor amusement park! an eco-park! — as it is for its collection of retail stores. It also has some 30,000 plants and 400 live trees, some as tall as 35 feet, growing inside its spacious confines. So how do they prevent an infestation of harmful insects? You don’t want to spray and endanger the 40 million visitors the Mall sees each year.

What do they do at the mall? Take a hint from greenhouses around the country and release ladybugs (also known as lady beetles). The mall recently unleashed 72,000 of the hungry critters to help control aphids and other pests. Fears that they might go after the treats shoppers carry around or enjoy in the food courts are unfounded. The bugs stick almost exclusively to plants and are only interested in getting their meals on the hoof (so to speak). Even in a space as large as the mall — it’s claimed that seven Yankee Stadiums would fit inside — the ladybugs are confined. If they finish the pests in one area and move on looking for more prey, they’ll still be inside the mall.

Dispersal, especially after release in outdoor gardens, is a common problem with ladybugs. But there are a few tricks you can use to keep them around to do the job. They’re stored under refrigeration, a technique that mimics their inactive winter state. They’re programmed to disperse after their long winter sleep so allowing them time to adjust slowly is important. Release them in the evening, when cooler temperatures prevail. And provide them moist conditions; a light watering just ahead of release is a good idea. If they arrive to dry conditions, they’ll leave in search of water right away.

Another trick is to release them only when needed; in other words, when there’s a problem with aphids. This might suggest you need to time your order carefully. Not so. Lady bugs will keep for up to several weeks in a refrigerator. If you order them today, they’ll be alive well into July in the cool comfort of the refrigerator. More about ladybugs, including a trick to “glue” their wings so they can’t fly away, here.

You can also attract ladybugs to your gardens with scented lures that simulate the smell of aphids. Can’t say I’ve tried placing attractants in the garden to keep lady bugs around… as long as there is something to eat they maintain a presence — but the idea has promise. Has anybody tried it?

One last suggestion. Even though school is out, your kids can make a great science project monitoring the use of ladybugs in your garden. And they’ll enjoy getting involved with ordering, releasing, and tracking their behavior. Two great principles of science are involved: observation and notation. Your kids can look for aphids, release the ladies when pests are spotted, and then monitor what happens. Everything should be recorded daily in a journal (and this might save you entries in your garden journal). With the information they’ve gathered and recorded, added to a little on the ladybug’s lifecycle, and they’ll be ready to go once that science project assignment comes down next school year.

One Response to “Ladybugs To the Rescue”