Ladybug, ladybug, fly away home, your house is on fire, your children all gone. 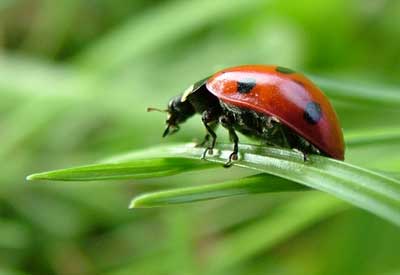 Most of us know that classic rhyme from childhood, but adults, particularly gardeners, have a new-found appreciation of the humble ladybug. That’s because certain species, including the most common one – Hippodamia convergens – prey on pests. There’s at least one Internet website that refers to ladybugs as the “Tyrannosaurus Rex” of the Insect World because of its predator tendencies.

Like many insects or animals, ladybugs, while useful, are misnamed. It isn’t a bug, but a beetle. Beetle lore has it that the ladybird beetle – as it’s known in Europe – was named after the Virgin Mary in the Middle Ages. Today they are native to almost all parts of North America with approximately 400 different species with 98 of them residing in Florida along with retirees and other lovers of sunshine. Worldwide, entomologists have identified some 4,500 species.

With that many species, it’s no surprise that ladybugs come in many shapes and sizes. Usually when we think “ladybug” we think of a red-orange creature with black spots. However, the number of spots can vary and sometimes they are more blotchy than spot-like and some have stripes instead of spots. Some are more yellow than red-orange. They can be black without spots. Some are gray with black spots. What they all have in common is that their larvae are all “alligator-like” and they all have three pairs of legs.

Shop our large selection of beneficial insects, including live ladybugs, at Planet Natural. One half pint — 4,500 ladybugs — treats an average size garden and FedEx 2-Day shipping is FREE!

The beneficial species of ladybugs eat aphids, chinch bugs, asparagus beetle larvae, alfalfa weevils, bean thrips, grape root worm, Colorado potato beetles larvae, spider mites, whiteflies, mealybugs, among other insects. For example, two species – Harmonia axyridis and Hippodamia convergens – prey on aphids. A single ladybug may consume as much as 5,000 aphids in its lifetime. In addition to being beneficial, their help comes cheap. Ladybugs are an inexpensive solution to warring on garden pests and are cheaper than chemical pesticides. They also won’t hurt people, plants or pets. Finally, they are also a “self-renewing” form of insect control. You can purchase ladybugs to control garden pests here.

Of course, not all species fall into the beneficial category. Some ladybugs – principally the subfamily Epilachninae – feed on plants and are not welcomed in most gardens.

Reportedly the ladybug’s bright colors – black and red most commonly – are designed to ward off predators. The colors are a “red flag” which signal “Don’t eat me, I am toxic and don’t taste good.” It’s what scientists call “aposematic.”

How many ladybugs do you need? Approximately 2,000 are enough for a small garden with 18,000 probably more than enough for a large garden.

Ladybugs are one of the few beneficial garden insects that can be stored in a refrigerator and will lie dormant provided they don’t freeze or dry out. They store well up to several weeks long.

Worried about your ladybugs flying away home? Reportedly spraying their backs with soda pop and water will “glue” their wings shut so they can’t fly. The sprayed-on solution will work for up to a week until it wears off. When you release the ladybugs can also make a difference. Try releasing them only in the late evening and before you liberate them, be hospitable and spray water on the plants in the area for them.