Few endeavors are as satisfying as starting, planting and growing your own organic tomatoes. 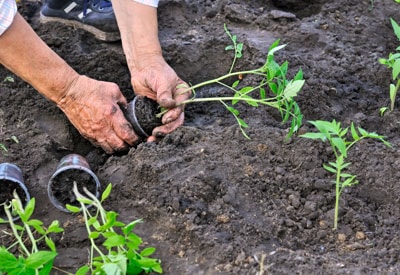 Your not-so-young Planet Natural blogger was taught by his grandfather long ago to get as much of a tomato stem under the soil as possible when transplanting. This encouraged strong, new root growth. And I’ve been planting tomato starts, whether from nurseries or my own basement (under T5 fluorescents), that way ever since.

Grandpa, always a good teacher, pointed out the short, fine hairs on the tomato’s stem and explained that once underground they would produce lateral roots (though I’m pretty sure he didn’t use the word “lateral”). Since then, I’ve told many a kid the same story.

But I’ve also had enough experience with tomato roots to know they usually don’t grow a long effective tap root on their own. Even planting the stem deep in the soil — after removing all but a few “true” leaves and their stems — doesn’t seem to yield a deep tap root that sports a lot of lateral roots going horizontally through the ground.

Instead, at the bottom of the planted stem, is an almost woody tangle of roots with an occasional runner pushing out. This isn’t the way we’ve imagined tomato roots ever since grandpa taught us to transplant. We pictured a long tap root with lateral roots pushing out horizontally at various intervals.

Turns out that there’s an easy explanation for this. Tomatoes planted directly in the garden from seed grow taproots. Tomatoes that are started in pots and then transplanted in the garden (or in a larger pot and then the garden) end up with that cluster root, one that doesn’t grow much deeper than it’s stuck in the garden.

The tomatoes we grew from seed — we planted them in our sunniest spots — almost always grew to bare fruit at the same time as the starts. Pulling up the plants to observe the root structure at the end of the season tended to verify our thinking.

We came to realize, with some detailed help, that the reason transplants and direct-sown plants matured together was probably because of the type of roots the transplants had vs those we started direct from seed.

A tap root sporting many lateral roots is not only a better anchor for the plant, it brings up more moisture during that critical period of growth before blossoms appear.

So what does that mean for those of us who can’t sow tomato seed directly into the garden because we live in the mountainous west and the short-season northern climes? It means that when transplanting, we take care to disturb the plant’s roots as little as possible. And our old practice of transplanting tomatoes a second time from small, starter pots when they’re three or four inches tall into larger pots where they can grow up to 10 inches tall is a thing of the past.

Of course, growing a plant several inches tall yields a central stem that can be trimmed of lateral stems up to the top two or three sets of leaves, leaving plenty of stem to go in the hole. We’ve even layed plant stems sideways in the trench in which we were planting to accommodate their length, gently turning them upward as we add soil, letting nature take its course as the plant turns to stand straight and tall with just a little twist or turn where it emerges from the ground.

But what we’ve noticed over the years is that those larger tomato starts don’t mature any faster than those that are only four inches or so tall. So we start our tomatoes indoors later than most of our friends, say five or six weeks ahead rather than eight or more weeks before transplanting into the garden when the soil warms. This also keep the roots from bunching as much in the starting pot. They just don’t have the time.

Every time we transplant, we shock the roots and set back the plants. That’s why they’re more apt to grow in a shallow tangle rather than probe down as deeply as they can. The compromise — the best thing that can be done — is when it comes time to transplant in the garden, disturb the roots as little as possible. Containers that go right into the ground are perfect.

And yes, if our smaller tomato starts have more than two or three sets of true leaves we snip them off, carefully so as not to scar the stem, and stick the plant in the ground right up to the remaining leaves. Just the way grandpa taught us.

Here’s a tutorial that includes everything you need to know about starting and growing tomato plants. Let us know what you’ve learned about rooting this all-American garden favorite.

An easy-to-use concentrate that plays many important roles in plant growth. 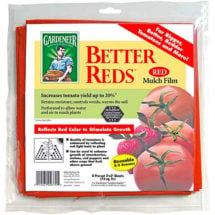 Better Reds has been tested to show on average a 20% increase in fruit yield.