Easy to grow once germinated, parsley is a nutritious and attractive addition to any garden. 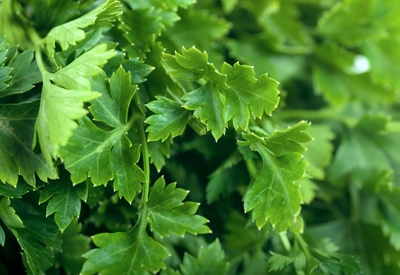 As a kid, your friendly Planet Natural Blogger was thought weird because he would eat the parsley garnish that came on his plate when we made those infrequent trips to the restaurant. I enjoyed my weird characterization so much that not only would I eat my garnish but would collect and eat everyone else’s parsley as well. Little did they know — little did I know — what a healthy thing it was to be a weird parsley eater.

Surprisingly, parsley was often overlooked on so-called superfood lists until recently. But the more we learn about the health properties of certain volatile oils, the more we realize that parsley is valuable for more than its high levels of vitamin C, vitamin K, Vitamin A, and folic acid as well as its iron, calcium, and magnesium. Those oils have anti-inflammatory and antioxidant properties. They’re known to boosts liver health, maintain a good immune system, and have even been found to discourage and inhibit the spread of certain types of cancers.

Parsley is credited with all kinds of benefits, including relaxation of smooth muscle tissue (especially important to asthmatics), maintaining good vision (it contains lutein and zeaxanthin), and promoting good circulation and heart health. Its folk remedy uses, including rubbing it on insect bites to stop itching and as a baldness cure, are legion if unproven. So potent is parsley that it’s recommended that pregnant women and those taking blood thinners, like Coumadin, avoid it (always talk to a doctor before attempting any herbal “cure”). So powerful is parsley that Celtic armies employed it in defeating the invading Greeks simply by strapping bunches of it on the back of burros and sending them straight at the invaders (the Greeks held superstitious beliefs about parsley because of its attachment to their ancient gods). 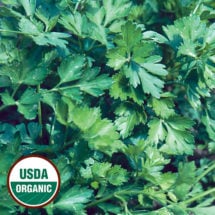 Prized by Italian cooks for its strong flavor and large dark-green, flat leaves.

Flavorful and exotic, heirloom herbs have passed through kitchens and tea rooms for generations. And they’re easy to cultivate… try raising them indoors! Need growing advice? Visit our herb guides for tips and information on specific types.

Of course, we always knew — ever since those childhood restaurant visits (thank-you, Uncle John and Aunt Rhea!) — that the chlorophyll in parsley would act as a palate cleanser and would freshen our breath as well as soothe a sour stomach no matter how many raw onions were in our salad.

So why weren’t we always growing parsley in our garden? Good question.

Part of the answer had to do with out limited knowledge of its culinary uses (see “garnish” above). Another reason had to do with germination. Parsley, both curly and flat-leaf types, is notoriously slow to germinate, often taking two weeks or more to sprout. And its rate of germination is among the lowest of any seed you might purchase. To make matters worse, most of the parsley starts we found at nurseries and big box stores was often leggy and not so healthy.

But that shouldn’t stop you from growing your own parsley. Once you get it going, it’s easy to grow. And parsley is a great green to grow inside all year long. As long as you give it plenty of light and keep it watered, it will do well. Starting it indoors will give you a head start — it will be ready to go into your garden in seven or eight weeks — but you can sow it directly into the ground once all danger of frost has passed.

Soaking seeds overnight not only speeds germination but removes the naturally-occurring furanocoumarins, chemicals that discourage seeds from germinating near parsley. Some gardeners recommend sticking seed in the freezer for a couple days ahead of planting to help speed germination but I can’t say we’ve tried this. (You?)

Make sure your soil drains well and is rich in organic matter. Parsley likes a sunny location but if you can give them an hour or two of late afternoon shade, all the better. Don’t try planting parsley in the middle of summer. Young parsley doesn’t take well to the heat.

As it emerges from the ground, parsley looks like blades of grass. Don’t make the mistake of thinking its a weed and pull it. We try to thin it shortly after it emerges but it doesn’t need a lot of space so not much thinning is necessary.

We often started parsley directly in the ground inside our cold frame well ahead of the last frost. It grew well there and provided us a constant supply. And it survived the winter there, with the help of some mulch. Parsley will overwinter in the garden in areas down to zone 5 — it lasts a couple years before going to seed — as long as you mulch it heavily.

We find Italian parsley serves our culinary uses more than the traditional curly kind. But we love the curly kind for its ornamental uses — it will grow up to 15 inches tall during its second year — and like to poke it in small spaces in out rock garden. We also love to chop curly parsley up into tabouli salad but Italian parsley will work as well.

Possibly the best use of parsley is as an addition when making green juice for you lucky folks with a juicer (you can also make it with a good blender and a strainer). You’re assured of getting all the nutritional benefits that way and can mix it with other, healthy vegetables you’ve grown yourself.

Here’s another good guide to growing and using parsley, compliments of the fine folks at the University of Minnesota Extension division. Let us know about your experiences growing — and eating! — parsley. Any real parsley lovers out there? 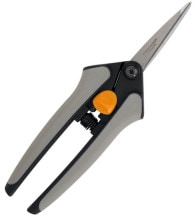 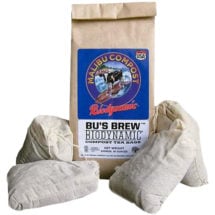 Loaded with beneficial microbes, plus all of the nutrients your plants need.