The latest information on healthy, heirloom, organically raised tomatoes. Grow them yourself! 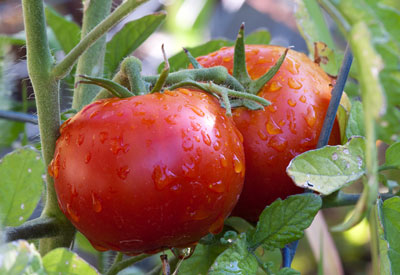 Do you have your tomato starts planted? If you need motivation, here’s the latest. A study published last month in PLOS One, the international, peer-reviewed, open-access scientific journal, showed what a lot of us always suspected: organic tomatoes are more nutritious than conventionally grown tomatoes.

You can read the study here. Don’t let its title — “The Impact of Organic Farming on Quality of Tomatoes Is Associated to Increased Oxidative Stress during Fruit Development” — discourage you. What it boils down to is that organically grown tomatoes contain more Vitamin C and more phenolic content than chemically fertilized, pesticide-dependent tomatoes.

You know what phenols are, right? Okay, neither really did we. From the report: “a large range of secondary metabolites in fruit and vegetables as phenolic compounds act as elicitors that activate Nrf2, a transcription factor that binds to the antioxidant response element in the promoter region of genes coding for enzymes involved in protective mechanisms.” Shorter version: they’re compounds that deliver antioxidants, otherwise known as phytochemicals.

What good are they? Again from the study, “The consumption of fruit and vegetables has been associated with lower risk of chronic human health problems like cardiovascular diseases, cancer, hypertension and diabetes type two due to their high contents in dietary bioactive compounds, the so-called phytochemicals, endowed with protective properties. Until recently, the health benefits of fruits and vegetables have been attributed to the antioxidant properties of the phytochemicals they provide.”

Add to this the fact that the study found Vitamin C levels were 55% higher in the organic tomatoes. Now do you feel motivated to get those organic heirloom tomatoes started?

You may remember the controversy over a Stanford study released last year that declared organic produce was no more nutritious than conventional produce. Turns out that buried deep in that study was the finding that indeed organic produce tends to have higher levels of phenols.

The PLOS study found one drawback; the organic fruits were generally a bit smaller than conventionally grown tomatoes. For those of you to whom size matters most — bragging rights! — then go ahead and pour the chemical tomato fertilizer to your plants. But if you’re interested in nutrition? You know what to do. After all, what would you rather serve your family? A big tomato? Or one that’s pesticide free and higher in Vitamin C and antioxidants?